I have written about when my family emigrated to Australia, and also about life in Sydney.

After we had been living in Sydney for just over a year my father got a job working as a printer for the Australian National University. The ANU had been founded in 1949, but even in the late 1960's Canberra was a city that had trouble attracting workers. In order to offset this many employers (well - OK - both employers, and even then one was funded by the other) offered accommodation for an interim period. As well as houses and flats there were hostels, and these were usually available for three years - the time it was anticipated it would take to rise to the top of the government housing list. (There is more on Canberra government housing here, and a photoset of ANU housing here) 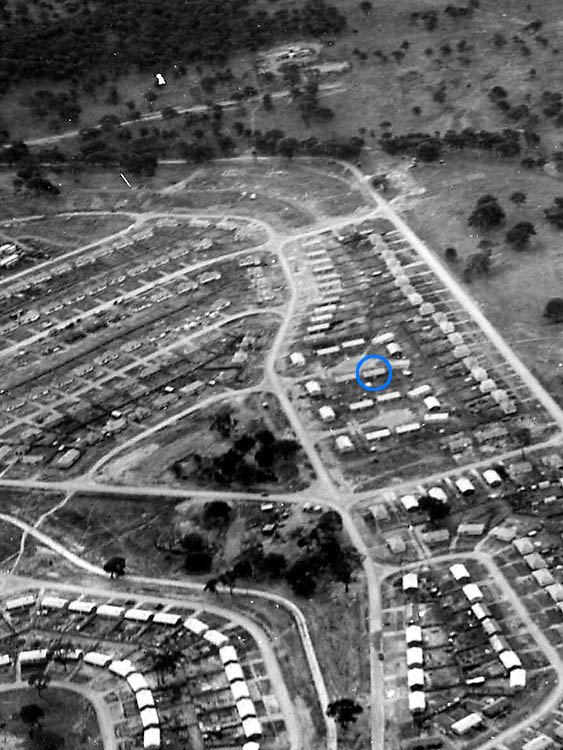 Moving from Sydney to Canberra (a distance of about 200 miles) meant a train journey of about a billion-trillion hours (or 6 hours, depending on age), even though Dad had been flown to Canberra for his interview.

The house we were given was a Riley-Newsum prefabricated house, built in Lincoln (England) and shipped to many parts of Australia, somewhat controversially. It had three bedrooms, bathroom, separate toilet, kitchen, laundry, dining room and living room, all set on 1/4 of an acre, and it was, without doubt, the bestest house I had ever lived in. In the above photo about half of the houses are exactly the same type. There are still some Riley-Newsum Houses still doing service in Canberra, 60 years later.


A row of Riley-Newsum houses, just around
the corner from where we lived.
(photo from ACT Archives) 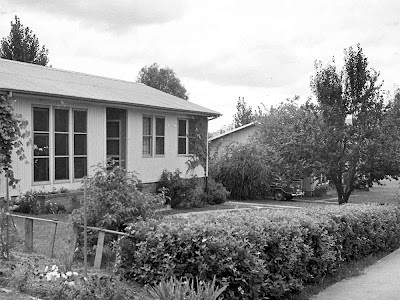 Here is a video about these houses, although the ones shown in the video were destined for Canada, not Australia. I do hope they were better insulated.

There is a picture of where the factory used to stand here
Posted by Simon at 09:00

Your post reminded me of our time in Canberra, although not prefab, our house was newly built when we moved to Canberra to 39 Baudinette Circuit, the Australian company that houses defence family buys up building plots and then sells some of the houses at the end of the tour to recoup the money, so you will have a mixture of defence and 'normal' people in the area. it is nice to see the Google street view our house hasn't change a year after we moved and of course the weather is the same...blue sky, no clouds!

Glad to have provided you with some nostalgia :-)

OMG I can't imagine the inner north so bare of foliage? What nostalgia. And oh the irony, here I am living in Bruce, not too far from Baudinette Circuit.

That's true -- one of the most striking things about flying in to Canberra is that you can't see anything but trees from the air.