Amongst the events of 2014 that didn't get reported at the time:

We finally (after 5 1/2 years) got TV. We had bought a satellite dish, receiver and all the gubbins for English TV before we moved in 2009, and chanelled the cabling in the walls when we insulated them but never quite got around to connecting it all up. Mainly this was due to lack of confidence about using a power tool at the top of a very tall ladder in order to install the dish. We were starting to feel, however, that we should use the equipment before it became totally obsolete.

In November last year (that's 2014, remember) we called M. Pinkosz  to ask for a devis to install the dish, tune it, and make sure it all worked. As the devis was reasonable we decided the time had come. The whole process took less than an hour, and we now have 6 channels of TV to watch (and over 200 more to avoid at all cost).

We still don't have French TV. That's the next step, and will involve buying a TV arial and a long pole to mount it on as we are in a bit of a shadow here. I am not sure about the aesthetics of TV aerials/dishes, so there may be creative thinking to be done. The current dish may be painted stone coloured in spring. 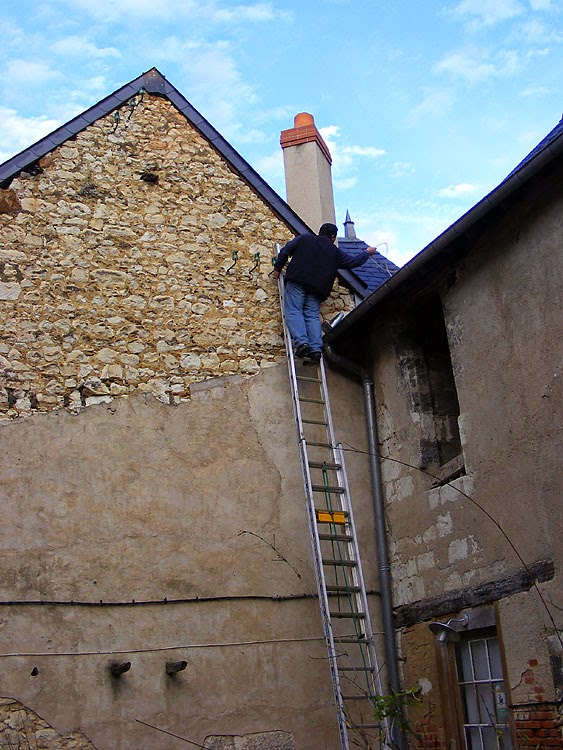 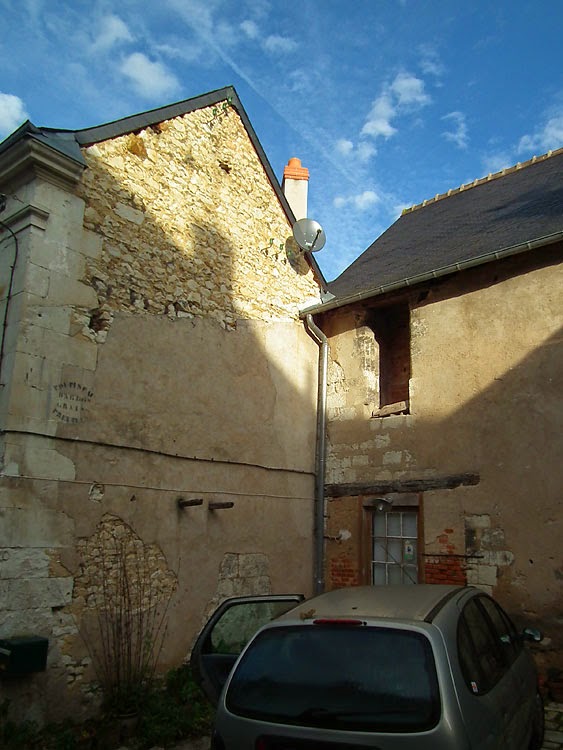 I put up a turkey leg in brine for some future date.

Homemade Swedish meatballs, cream and red wine sauce, mashed potatoes  and spinach all from the freezer. Poached pears with chocolate cream and chopped walnuts.
Posted by Susan at 09:00

These days, TV is not as important as it was before the advent of the internet, personal computers and tablets, but may be needed for some programs and specials.

We haven't had TV since 1992, but now we Chromecast Netflix onto the TV set we had for watching DVDs...I've never missed it.

Looking good and not offensive at all (colour-wise). I only have two English Channels, BBC 1 and 2 (cable). Wish I could have ITV as well, but it isn't available around here, unless you install a 'dish', which I won't, because I'm only a tenant :)

I still believe that French TV is a good way to improve your language comprehension. Just watching the weather and news programs helps a lot. You start to understand how words are really pronounced. But as CHM says, you can watch a lot of that on a tablet or a computer. Not so comfortable as sitting in front of a TV set, however.

chm: I don't think you need TV any of it these days really.

Betty: Our TV is hitched to a computer and various bits of audio equipment too, so prior to the dish we watched downloads or occasionally streamed.

Ladybird: the grey blends with the slate, so it may not be worth painting it stone colour.

Ken: I agree that watching French telly is great for comprehension and pronunciation tips. No problem with comfort as the telly is connected to a computer. All we actually don't have is free to air standard French telly. Anything that can be streamed or downloaded we can watch.

I wouldn't say getting English telly is easier than getting French here. It just depends on what equipment you have and whether you want to take out a subscription or not. The need for an aerial is to do with the geomorphology, not a market based phenomena. Radio reception is crap here too, but hoorah for the internet because we can listen to anything via the computer.

Having your chest freezer in your unheated hall would save electricity, if you could fit it in there.

Carolyn: That is the idea ultimately, or at least, for it to go into the unheated pantry. We can't get it through the door between the kitchen and the entry hall though, so it needs to go out via back door, up the street and in through the front door. This is currently more forward planning and logistics than we can be bothered to muster, but we'll do it eventually.

Unless I am mistaken, you can aim your dish antenna toward a French satellite and then get the free French TV channels. There are 20 or so of them.

You are correct Ken BUT you cannot then get the UK TV....

And unless you have a newer TV set with a built-in TNT decoder, you would have to buy a separate piece of hardware to convert the signal from the satellite. I was just reading about it.

Luckily, I know very little about UK TV and American TV is not available here off satellites. I'm not tempted, and I think watching and listening to French TV is very instructive and pleasant. I get many US and UK films in VO, so I don't have to worry about dubbed versions. And when I really want something American, I can just download it from the Internet.

Ken: I like many French films, especially the gentle comedies. And I like TV programmes such as Des Racines et des Ailes and lots of French nature docos.

I've recently watched two such French films: "L'Enfance nue" (1968), and then "Mes héros" (2012 I think) with Gérard Jugnot and Josiane Balasko. Both are worth it, though they are not at all similar. Another very good one is "L'Heure d'été", recent, with Juliette Binoche and Charles Berling. And "Les Saveurs du palais" with Catherine Frot and Jean d'Ormesson. I watch a lot of films...

Ken: Is Les Saveurs du palais a comedy? I assumed it was a drama based on a true story. I really like Catherine Frot in comedies. I've never watched her in her detective show though, which I assume from the trailers is deadly serious.

Thanks for the recommendations.

Les Saveurs du palais is a comedy but based on a true-life story of a woman who was François Mitterrand's cook at the Elysée palace.

By the way, Thalassa is doing a series of shows about estuaries. Last week was La Gironde. Next is the Loire, I think. The one about La Gironde was very interesting.

And let me say that L'Enfance Nue is not really a comedy. It's more like a documentary or a cinéma vérité movie.

Have you watched Nelly et Monsieur Arnaud yet? Michel Serrault is really good in it. He's also good in Une Hirondelle a fait le printemps, which is a good comedy about a young woman learning to live the rural life in the Alps.

Ken: Many thanks for all these movie suggestions. I haven't watched Nelly et Monsieur Arnaud yet -- thanks for reminding me about it.


Re antennae: We used this chap (who does not live far from Preuilly) and he is especilally well versed in systems for anglophones who want 'cross-channel tv'
http://www.crosschanneltv.com

Abbe P: Thanks for this link. He may come in handy for the future. We used the local Preuilly guy to install our gear and it all worked perfectly with no tweaking at all. We and the technician were somewhat amazed given how long we'd had the stuff.