We did make it to Preuilly's retraite aux flambeaux, even if we didn't tell anyone about it at the time. 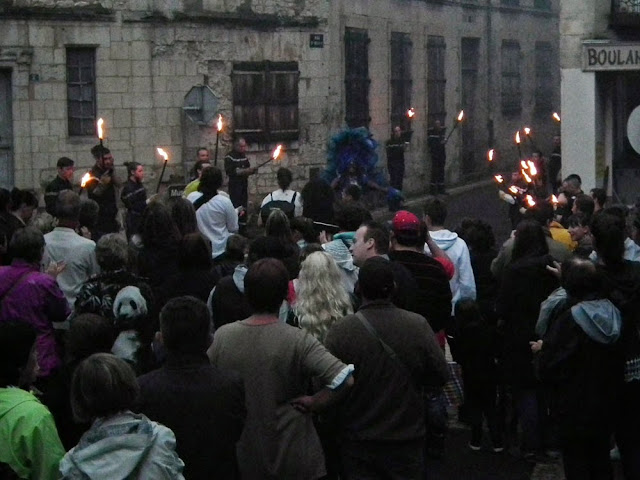 As is customary, the townfolk gathered outside the Mairie at dusk, followed the pompiers and their flaming torches on a walk around town, and ended up with fireworks and a dance at the plan d'eau. A few people weren't there because the World Cup Final was being played that night, but those of us who did attend were treated to a proper samba dancer in blue glitz, feathers and a whole lot of shakin', along with the flames and drums.

Those who went on the retraite aux flambeaux didn't miss anything in the World Cup, either: the town had set up a TV projector at the plan d'eau, and we all arrived just as the final whistle blew. And hence before the goal. Fireworks were delayed until after the game finally finished, and for those not watching football (foot, soccer whatever you call it in your neck of the woods) there was an impromptu samba lesson. 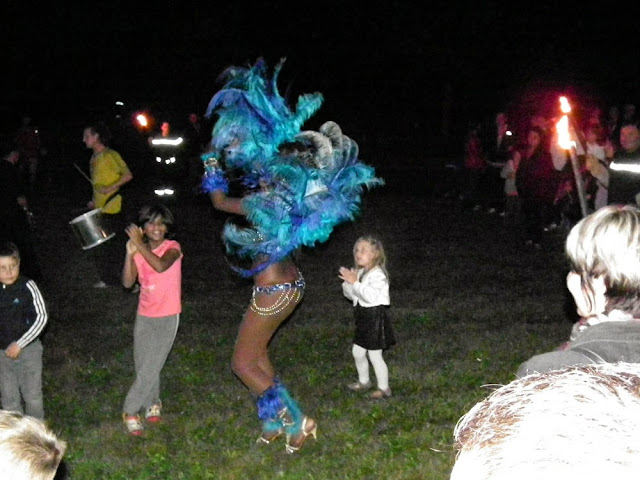 A tent full of French people cheering for Germany.
(Yup, you read that right.) 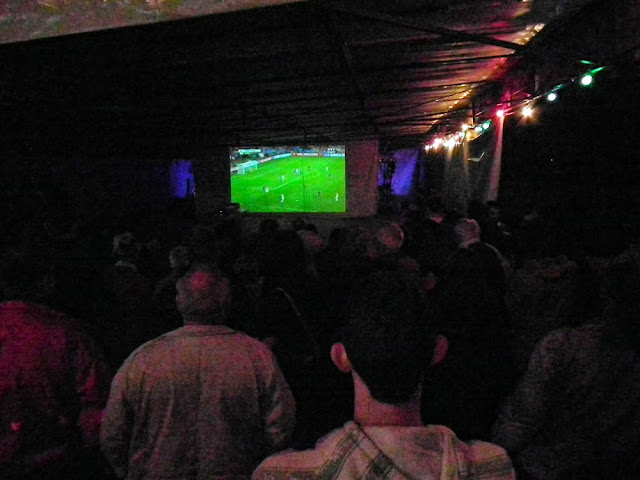 If you have never been to a retraite aux flambeaux and live near Preuilly, do consider a visit. It's worth the effort.

Well said Simon...
always a night not to be missed...
ours starts with Moules Frites outside the PreHisto bar...
followed by the long walk....
no Samba...
it is the kids who have pride of place here...
each carrying a paper lantern with a night-light inside...
and following the pompiers and fanfare.
After that... there is a dance floor set out in the Place Savoie Villars...
and the more active can boogie the night away!!
The rest of us can relax with a drink and watch eighty-somethings jive...
and they can...
I've never been that flexible...
but I hope I am still that supple in fifteen years time!!

And was the Zoo aware that one of their pandas had taken the night of in Preuilly??

The gyrations of the samba dancer in the blue glitz became noticeably less fluent, and forward movement more pronounced, as she neared the Poterne. My wife spotted that she was attempting to combine dancing with the holding up of her nether garment. Finally she took sanctuary in the outer Poterne courtyard. Her frantic gesticulations were correctly interpretted by another neighbour who administered safety pin first-aid. Dancing then resumed with gusto.

I didn't realise it was the nether garment that was the problem. I could see all the frantic adjustments going on behind the courtyard gateway. I thought it was the top that was slipping. 'Garment' is possibly rather a generous description of the strings of diamante and ribbon her hips were draped with, btw.

Is this a tradition all over Touraine, or something specific to your village? I wasn't aware of it when I lived up there, but then again was so overwhelmed by my own babylandia that I missed a lot of things!

I thought there were retraites aux flambeaux all over France for 14 juillet. Not everyone has samba though.

I'm not often in France for the 14 juillet, but I have never heard of that tradition here. The main events that I know of are "bal des pompiers," or else just fireworks. Interesting.

Oh! Well maybe it is a recent thing here and peculiar to the Touraine. Maybe I just assumed fete nationale celebrations would be fairly standardised throughout France and if that is what they do here it must be what they do everywhere. Maybe it isn't...