We have written about the Chapelle du Liget  before, but until we were looking at it as somewhere new we might add to our itineraries we had never visited before. The chapel is in the Loches forest, down a side track from the road to Montresor. It is locked, but the keys are at the tourist office in Loches and can be collected during business hours in exchange for a piece of official ID (passport, ID Card, Driver's licence) which you redeem when you return the keys. 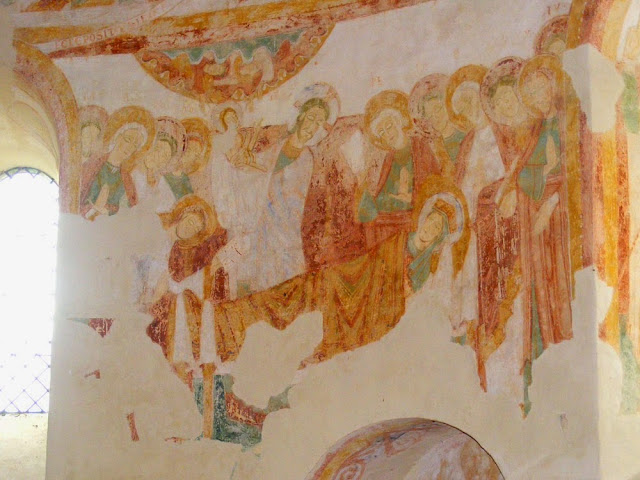 The chapel was built by King John (I assume that means he paid for it, rather than getting his hands dirty*) to celebrate the foundation of the nearby Chartreuse du Liget by his father - part of the work Henry II undertook in atonement for the murder of Thomas Beckett, Archbishop of Canterbury. What you see of the chapel today is the original building. A nave was added slightly later and then subsequently demolished. As you can see from the photos the main interest is in the wall paintings which are late 13th century and restored in 2008, but some of the restored corbels on the outside are pretty amusing. The interior is accessed using the key, which admits you to a small area behind a metal fence. The lock is stiff  - we weren't even sure at first if we were trying to open the correct door, and once the door was opened we couldn't relock it, resulting in 10 minutes of serious concern until Susan held the key just so.

*not something he was totally adverse to, it has to be said...

******************************************
#JeSuisCharlie: Yesterday gunmen attacked the headquarters of the satirical magazine Charlie Hebdo in Paris. Within hours a Twitter account was operating and a demonstration of solidarity with the magazine organised. We do wonder what the people who perpetrate these sorts of attacks think will be the result. As far as I can see, the result is that Charlie Hebdo will continue in its usual manner but now everyone will think of the journalists and cartoonists who work there as heroes. Ordinary Muslims will be more and more reluctant to practice their religion because they simply don't identify with its public face and would be horrified to be associated with its extremist elements, just as more and more people of white western backgrounds are unwilling to identify as Christian because of the evangelicals and fundamentalists. It's hard to tell if there is a connection or whether it's coincidence or irony, but the current issue of Charlie Hebdo lampoons Michel Houellebecq, whose latest book, Soumission, about France with a Muslim president, was released yesterday.

10 000 people gathered in Poitiers with less than 24 hours notice to express their solidarity. There were 3000 in Tours. I don't know how many thousands in Paris. I especially like the reactions of cartoonists from around the world.

I feel terribly sorry for Corinne Rey, the designer who was forced to let the gunmen in to the building. Today is a national day of mourning and there will be a minutes silence at midday to remember the dead.

Just when you thought that nothing that is done in the name of religion could shock you, something happens to shock you to the core.

"a deadly mutation in the heart of Islam" Salman Rushdie.

Gaynor: Salman Rushdie may write impenetrable rubbish in his novels but he often speaks good sense outside of his writing. So far as I can see, ordinary Muslims are just horrified that someone would hold the sort of belief that leads to this sort of act. All the major religious texts are about how to be a better, nicer person and get on with your neighbours, with a bit of mumbo jumbo mysticism thrown in to make it seem properly deep and wise. At their heart the religions are about doing good, but they are so easy to subvert. No wonder atheism is on the rise.