Things We Never Said (them Bells, them Bells...)

When we were in Paris in March 2014 we noticed some work being done on the West face of Notre Dame. 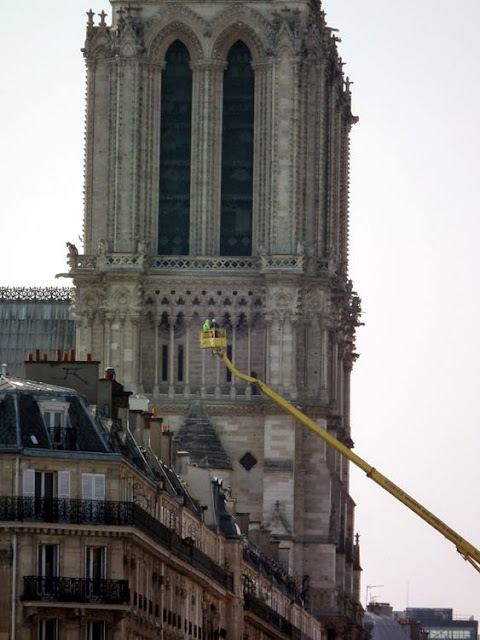 After Quasimodo handed in his notice the church started advertising for a replacement. A young man rang the doorbell and said "I am looking for a job, and I will do anything". The priest calls Quasimodo down from the tower and said "take this young bloke and show him the ropes" (sorry...)

They climb the tower and Quasimodo says that as the church is too mean to pay for ropes, ringing the bell involves taking a run up, leaping into the void, grabbing the clapper and slamming it into the bell before landing on the other side. He checks the clock, waits a couple of minutes, then says "like this". He takes a run up, throws himself at the bell and on the way past swings the clapper. On landing, he pirouettes, leaps again and the bell sounds. This he repeats until the bell has sounded twelve times. He then says "well - nothing to do for an hour, let's have lunch".

After lunch Quasimodo says the the young chap "OK - show me what you got". The young man looks at the void, shuffles back to get a good run up, then leaps into action. He flings himself at the bell, but instead of grabbing the clapper he hits the bell with his head, then plummets to the ground.

Quasimodo instantly runs down the stairs, calling for help. The bishop hears all this commotion and emerges to see a group of priests standing around a body. "Who is this man?" he asks, to which Quasimodo replies "I never asked his name - but his face rings a bell"...

A couple of days later, there is a knock, and another man asks for the job. Once again Quasimodo is called from the tower, and told to show the young man what to do. Amazingly, exactly the same thing happens. As the priests are all standing around the Bishop asks "well - did anyone ask this man his name?"

And Quasimodo says "No - but he is a dead ringer for the other bloke".

No-one says that reading a blog should be pain free.

************************************************
A Film to Watch: In these dark days of prejudice and hate a sleeper of a film is suddenly taking off. I haven't seen it yet, but reviews of Les Heritiers (known as Once in a Lifetime in English) are saying people are turning to it as an offering of hope. It's based on a true story about a class of underprivileged multi racial school kids who win a history prize with a project about the Holocaust. One of the kids plays himself and helped write the script. The film is no doubt full of clichés, but the real project changed lives and attitudes at least on a local scale.

It reminds me of the time I went to the Building Exploratory in Hackney, an area of London which corresponds quite well to the area Les Heritiers is set in. The curator showed us maps of the area from different periods. He said the one which made the most impact on the local kids was the one which showed the extent of bombing in World War II. Many of the local residents come from war zones and were immediately engaged by the story the map told them. They knew what living in a war zone was like, but had no idea until that moment that their elderly white neighbours also knew.

Another feel good film has been a box office success in the New Year period too. It is coming to Preuilly but we are not planning to see it. La Famille Bélier is about a deaf girl who becomes a singer. Unfortunately, none of the actors are deaf in real life, the sign language used in the film is just nonsense gestures and 'deaf person discovers music' is a fairly tired meme. As a deaf reviewer pointed out, actually, even though the hearing world seems to spend its entire time plugged in to ipods like life support machines, for most people who have been deaf from birth, music is neither here nor there and they are not feeling their lives are any the poorer for it.

A photo has been added to the Cowslip Primula veris entry.

A new entry has been added for Crested Cow-wheat Melampyrum cristatum.

Two photos have been added to the Big Rivers habitat entry.

An amusing photo of couples in tandem egg laying has been added to the Blue Featherleg Platycnemis pennipes entry.

A new entry has been added for European Cuckoo Cuculus canorus.

Two photos have been added to the Ivy-leaved Cyclamen Cyclamen hederifolium entry.

A photo of flower rich grassland has been added to the entry for Dry Limestone Ridges.

The gingernuts would make up for the joke - if only... ;o)

Gaynor. Does it help if you read it in Leslie Phillips' voice?

Well told, but you need to put the first sentence in the present too: "When Quasimodo hands in his notice, the church starts advertising for a replacement. A young man rings the doorbell and says"