Happily, the delights of the Villa Rose are easily seen from the street in Saint Aignan. The privately owned house is situated at 18 avenue Gambetta. 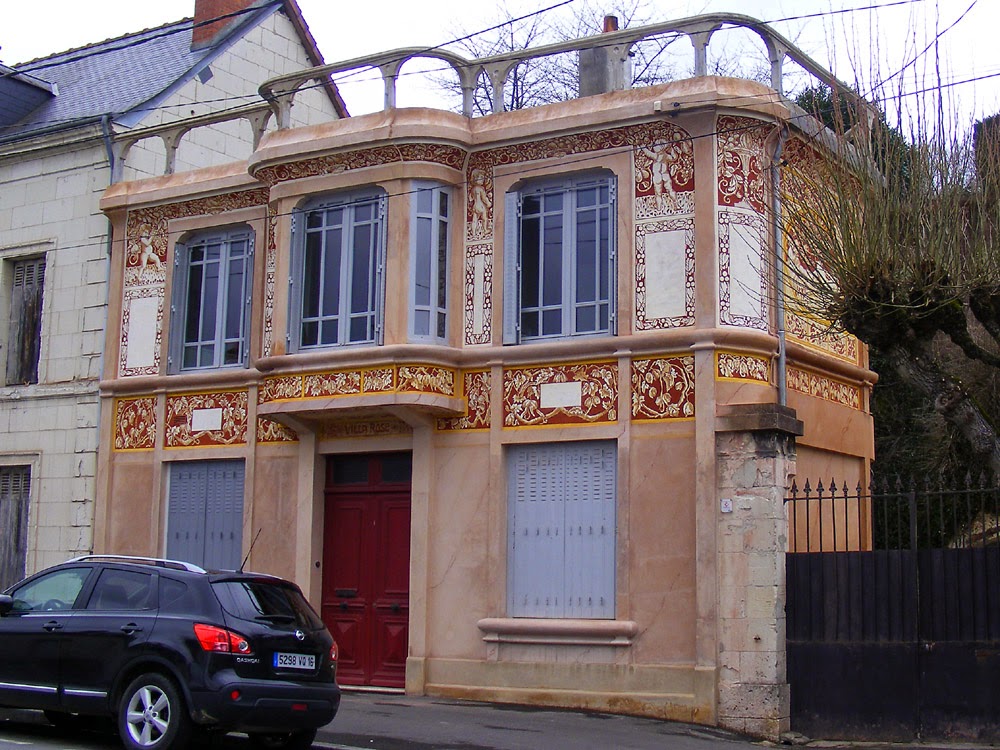 Designed and constructed as his family home in 1922 by the Saint Aignan architect Duchereau the house was consciously given an Italian look. The building was one of the earliest constructed from a reinforced concrete frame infilled with brick. He opted for a roof terrace and accentuated the Roman/Italian impression with the facade decoration. Three Florentine artists came to make the decorative scheme. They worked in the fresco technique known as sgraffito and there is probably nothing else like it in France. Their designs reflect the good life in the Touraine -- in a 12m² panel on the side of the house a woman who may be an hommage to the Impressionists reclines, surrounded by local products such as vines, fruits and nuts as well as musical instruments. Two putti play at her feet.

This panel on the side of the Villa has been entirely recreated. 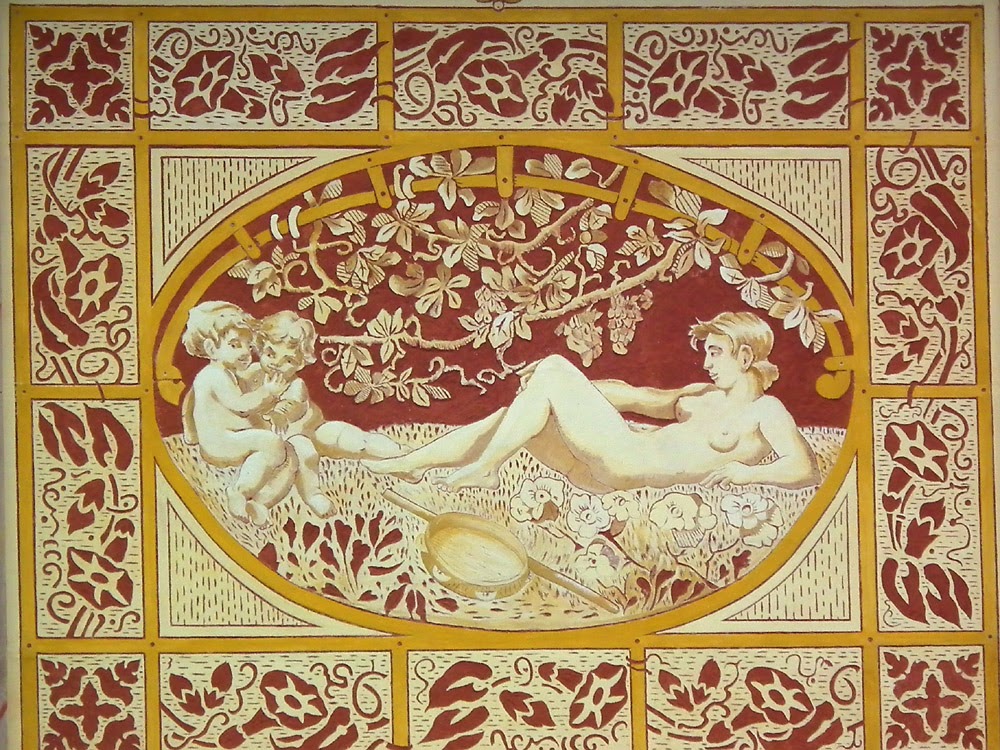 Unfortunately, 90 years after their creation, the facades were in a very bad state. For more than 30 years the roof terrace leaked and because the leaks weren't repaired immediately, irreversible damage began to appear and develop. Rain seeped in between the layers of render causing it to bulge and delaminate, disfiguring the motifs and encouraging small creatures to shelter in the crevices and cause even more damage with their digging and scrabbling.

Sgraffito is a type of fresco and the decoration on the Villa Rose is noteworthy both because of the quality of the images, but also because of the unusual technique used to create them. The technique has more or less been forgotten in France, rarely seen after the Renaissance. It had a modern revival in Riga and Brussels, but in France hardly anyone was interested.

Above the front door. 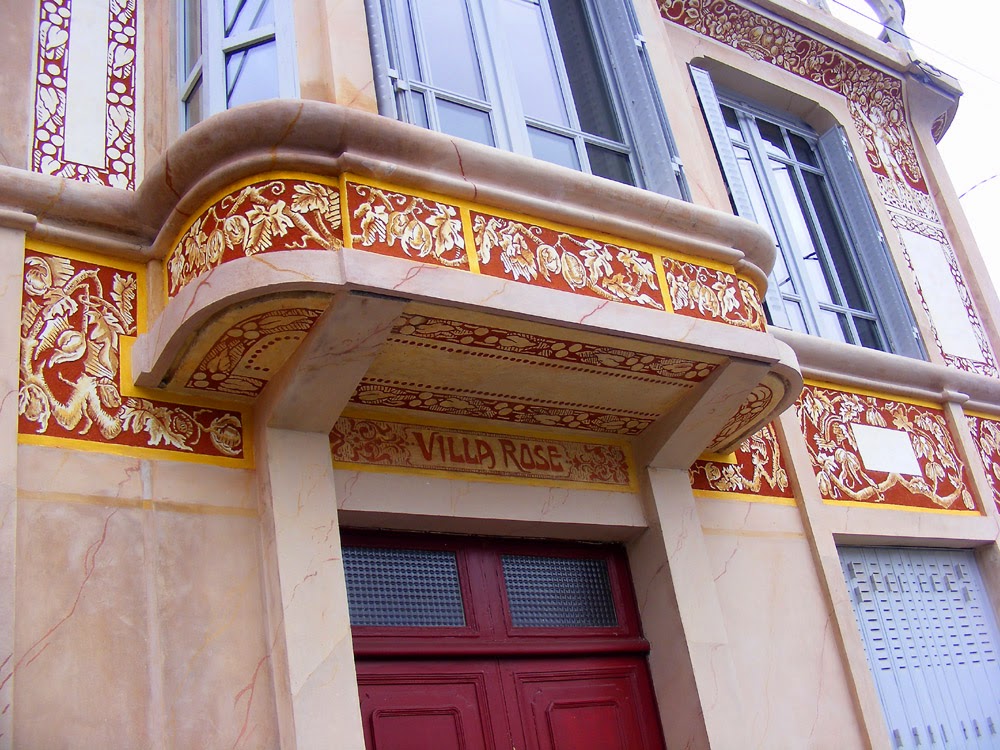 Fresco is a painting technique which consists of applying pigments mixed with water on hydrated (slaked) lime renders and damp sand. The goal is to only work on an area that can be painted the same day the render is applied so that a crystaline skin does not form. The work progresses at about 1m² a day. The sgraffito itself consists of scraping away part of the damp render in one colour to reveal the design and the colour below. Both scraped and unscraped sections can be painted while damp. At Villa Rose there are three layers of different coloured lime render (beige, red and white), covered by a tinted limewash, which have been scraped back to create images that are modelled in very low relief then painted in the fresco technique to accentuate shading. Once dry the render is as hard as cement.

Several years ago the house was aquired by new owners and they decided to restore the facades to their former glory.  They funded part of the restoration themselves, but also sought and received grants from various heritage organisations. Once funding was in place they engaged Corinne Tual, a specialist fresco painter, to do the work. The first section, in the courtyard, started in late 2011 and took just under a year to complete. It was a total restoration job, with virtually none of the original that was salvageable. The second stage, on the street front facade, took two years to complete and was finished last year. More of the original sgraffito in this section could be conserved, either in situ or if too fragile, removed and transferred inside the building to protect it long term.

A detail, showing the slightly 3D nature of the technique. 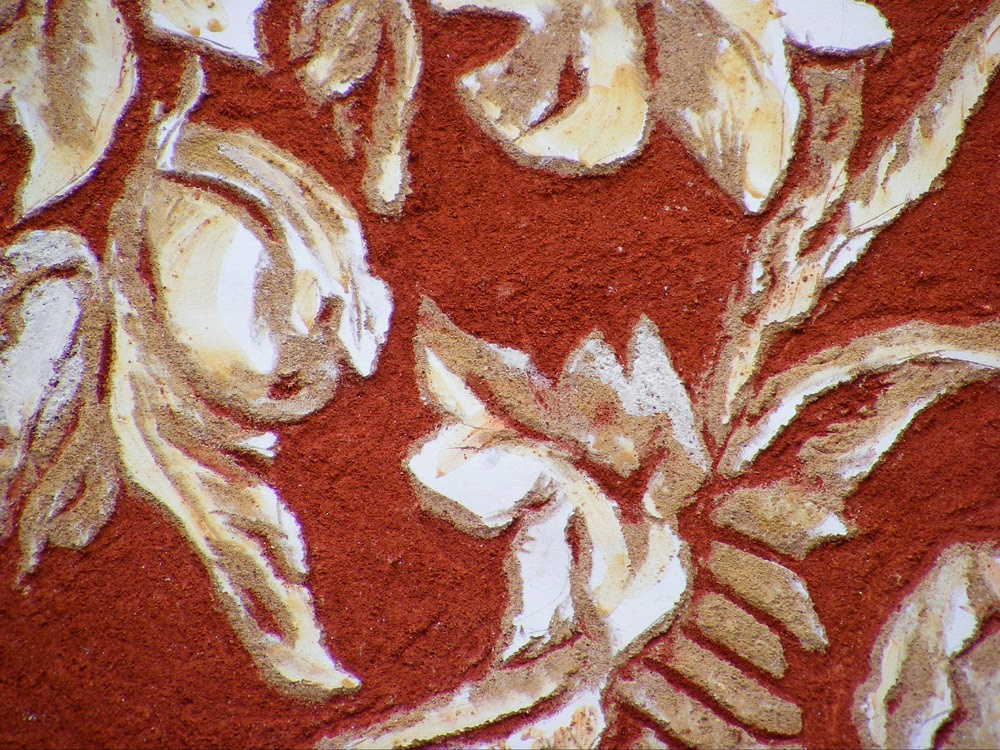 Over the last few years Corinne Tual has achieved a remarkable outcome at the Villa Rose. After studying at the Ecole Brassard in Tours and the Beaux Arts in Paris Corinne trained in decorative painting at the Ecole des Arts et Métiers at Ivry sur Seine. Fascinated by frescoes, she did a work experience placement on the Renaissance wall paintings in the convent of Entrevaux in the Alps before going to Italy to train further at the Palazzo Spinelli (Institute for the Arts and Restoration). At the same time that she was honing her artisanal skills she has dedicated the last 10 years to the study of the Pompeiian frescoes, collaborating with the Department of Antiquities. Reading and re-reading the ancient texts has allowed her to rediscover the techniques of the Roman world. She is one of only 3 or 4 people in France who can work in the fresco technique, which is much more complicated that wall painting (most fresco painters today are Italian).

Before undertaking the restoration Corinne Tual needed to do 6 months of preparatory work. First she carefully photographed the remaining decoration metre by metre. This would allow her to work out and draw the overall design. Then she needed to thoroughly clean the whole facade. Samples of the render were analysed under the microscope to establish their composition so it could be recreated. The design was drawn out, and a model made. This work was accomplished by a team that included the wall paintings conservator Sabine de Freitas from Chenonceaux, who produced a condition report and stabilised the sections which could be saved, and conservation mason Alejandro Cadena from Genillé, who reproduced the renders and did the marbling on the concrete frame.  You can see the project progressing on their Facebook page.

Detail of the front of the house. 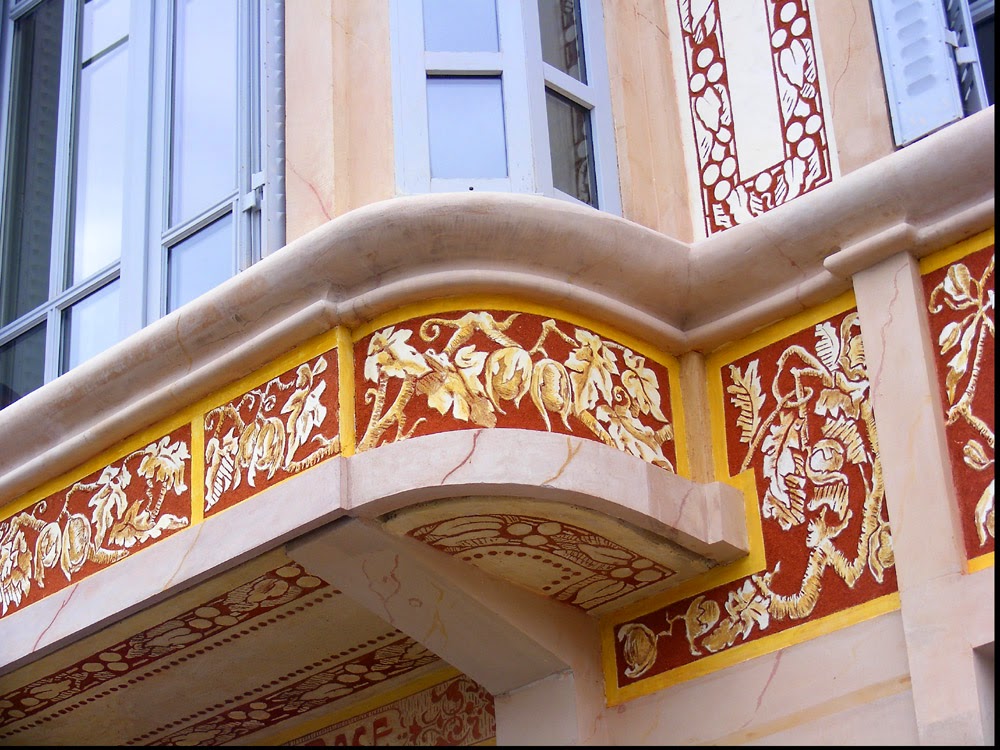 The old cheese dairy at Orbigny that Corinne lives in is also her studio. All the trials for the frescoes and sgraffiti were done in this combination house and laboratory. The interior walls of her house now feature some elements of the designs from the Villa Rose, done originally as practice pieces.

Sabine de Freitas announced on her blog at the end of last year that the team had won an international heritage prize for the project. There were 200 nominations for the prize, which judged the knowlege, ingenuity, experience and skill of the nominees in the technicalities of restoring and improving works of architecture. She says it was professional recognition of their ethics, expertise and their approach of sharing and engaging in outreach. All three are dedicated to sharing their experiences, the use of non-toxic products and sensitive restoration practices.

***********************************
Globe at Night: An international citizen science project to record levels of light pollution. Once a month people get out into their backyard, or any other site they fancy and record how well they can see certain constellations. For more information and to send your data into the project, see this website.
Posted by Susan at 09:00

What a fab building!
And from my favourite period, too...
Right at the end of the transition period from Art Nouveau to Deco, it has aspects of both periods...
symetry from the Deco and the bizzy-ness of the Nouveau...
the only sad thing for me, is that the side windows above the doorway are no longer the curved glass in metal frame that this building must have had...
but I would reckon it would probably cost a fortune to get a double glazed version!!

Wow! This is fascinating!

It's nice to see that building looking so bright and colorful. It has looked so drab and run-down for a decade now. Your photos are gorgeous.

Well spotted! I didn't pick up on that at all -- probably concentrating too much on getting nice photos of the sgraffito.

It's a very unusual house with an interesting history, isn't it.

Even pre-restoration it was a house you noticed though.

One of the wonderful "flat tops" from the same period ...
in Headingley...
had managed a compromise...
whilst most are now like this... or unrestored...
they had left the old windows in place...
but you could just make out the flat, plain, secondary, double-glazed unit...
behind!!
There was usually flowers, or a foliage plant, in the resultant mini-greenhouse...
that distracted the eye when there...
it was only the thick, plastic frame that gave the game away...
it worked for me... far better than the rather wierd result here...
that some of the Headingley restorations chose as well.
I prefered the three-barred, single panel, flat replacements that others used.
But the compromise version was the best... it left the original curve!
Also, with about twenty white houses from this period in one street....
the mish-mash of different companies approaches to the same problem...
spoilt the look far more than this solo work...
which, as you discovered, has more than a potted plant or two to distract the eye.

This is an amazing post -- so much detailed research! I'm sure it was a house one noticed even pre-restoration...

That's a real shame about all the different solutions visible in one street.

I've met Corinne and Sabine because they are involved in our project to restore the chapel in Preuilly. I like them both very much and am very happy to promote their work. Also I'm personally interested in it, so it was a nice post to write. And I'd always been curious about Villa Rose, so it was interesting to learn its history too.

Tend to agree with your statements Tim - cool building with hints of Art N and Art D. Never saw this in our 6 weeks in the area last year.

Like I said earlier - Sue and I missed out on this unique example of achitecture while living in the area last year - definately will be back.

It might still have been behind scaffolding while you were here. Otherwise I'm a bit startled that you failed to notice it -- it's on the right on the main road going up the hill and out of town (for example if you were going from Ken and Walt's to our place you'd pass it).

A lovely building that deserves to be saved and such an informative post about the process. Thank you for posting. TimB

The Villa Rose is on the main road through Saint-Aignan that you take from the center of town to go out to the SuperU store. It's on the right near the fire station.

Glad you enjoyed it. The team who did the restoration are amazing in terms of their dedication to this sort of arcane skill and knowledge.