Limouzin frères is a goat cheese dairy near us. They make prizewinning AOP Sainte Maure de Touraine cheese as well as several cheeses which don't have AOP status.The certification label AOP stands for Appellation d'Origine Protégée, and means that under European law the product can only be labelled with the certified name if it is made within the specified geographic area and using specified production methods. In the case of Sainte Maure de Touraine cheese the cheese must be a log shape, with a rye straw engraved with the maker's name inserted down the middle. The goats must be either the Alpine (brown) or Saanen (white) breed and eat a diet that is 75% made up of crops grown on the farm. If the cheese is to have the additional fermier (farmstead) certification it must be made from the milk from a single herd and be made on the same farm that the goats live and where they are milked. 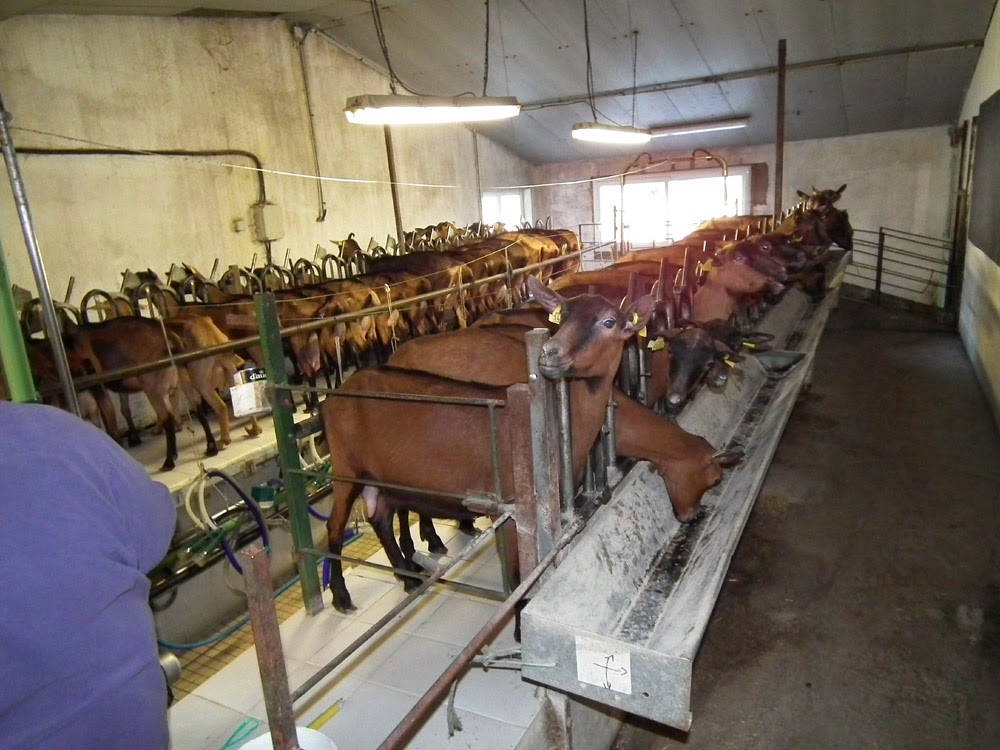 The goats are milked in their cohorts of 40 animals and milking the whole herd of 300+ does on this farm takes an hour and a half to two hours morning and evening. The goat shed is immediately to the right of the photo (see our post on goat husbandry at the Limouzin farm) and the cheese making facility immediately to the left. These Alpine does give about 2 litres a day (Saanens give more milk but it is lower in fats and solids).


Milk standing in troughs to develop the culture and coagulate. 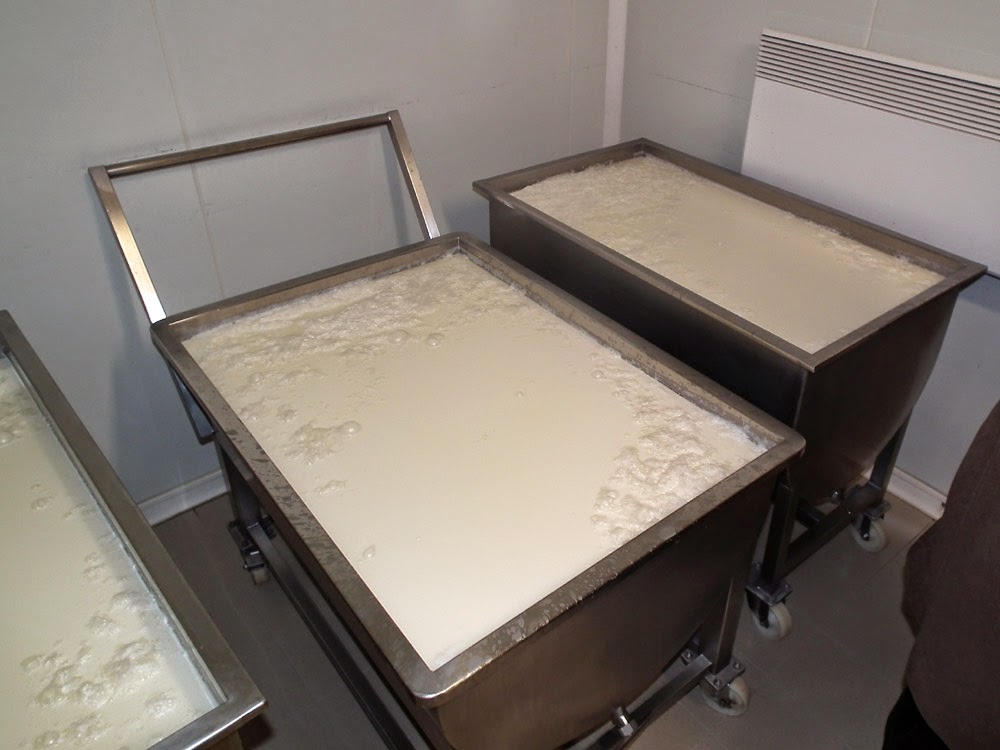 Milk from the parlour is pumped through to a holding tank in the cheese making facility. The tank holds two milkings, one evening's milk and the next morning's milk. The evening milk is cooled to 15°C and kept at that temperature overnight. The next morning more milk is added and the temperature raised to 23°C. The milk is transferred to open holding troughs on wheels and left in an anteroom for culturing and coagulation to develop over the next 24 hours. The culture is one that has developed on the farm and is not brought in. 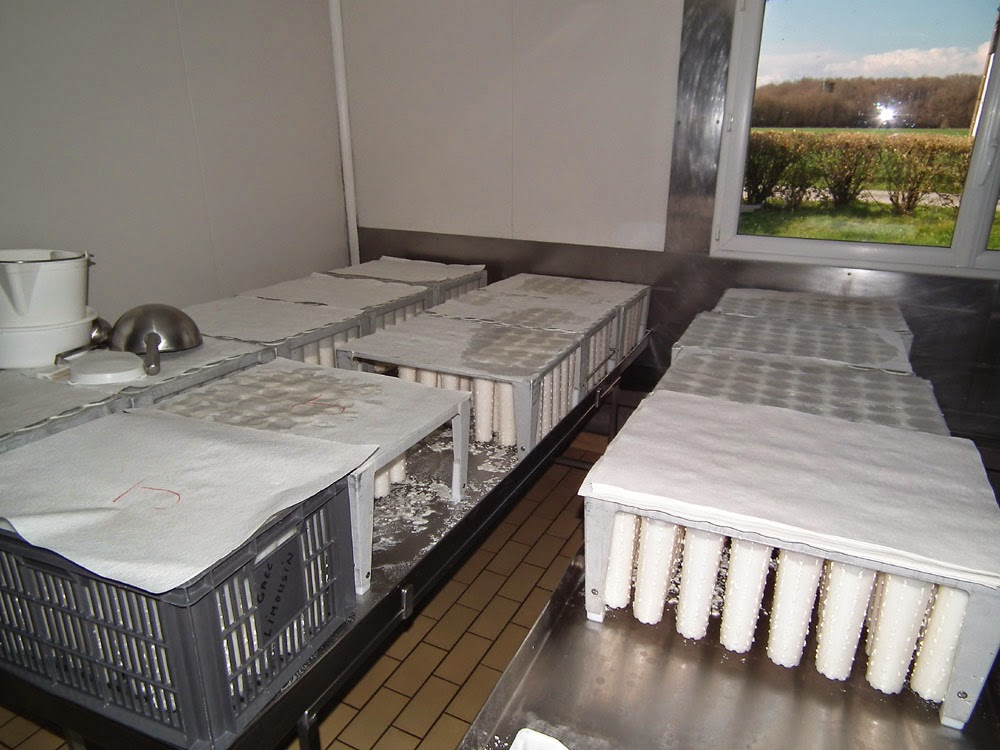 Once curd has formed the troughs will be wheeled into the next room and their contents carefully ladled into moulds, using a large scoop to fill the plastic log form, then topping up with a small scoop or ladle. This technique ensures the curd is not broken up too much. 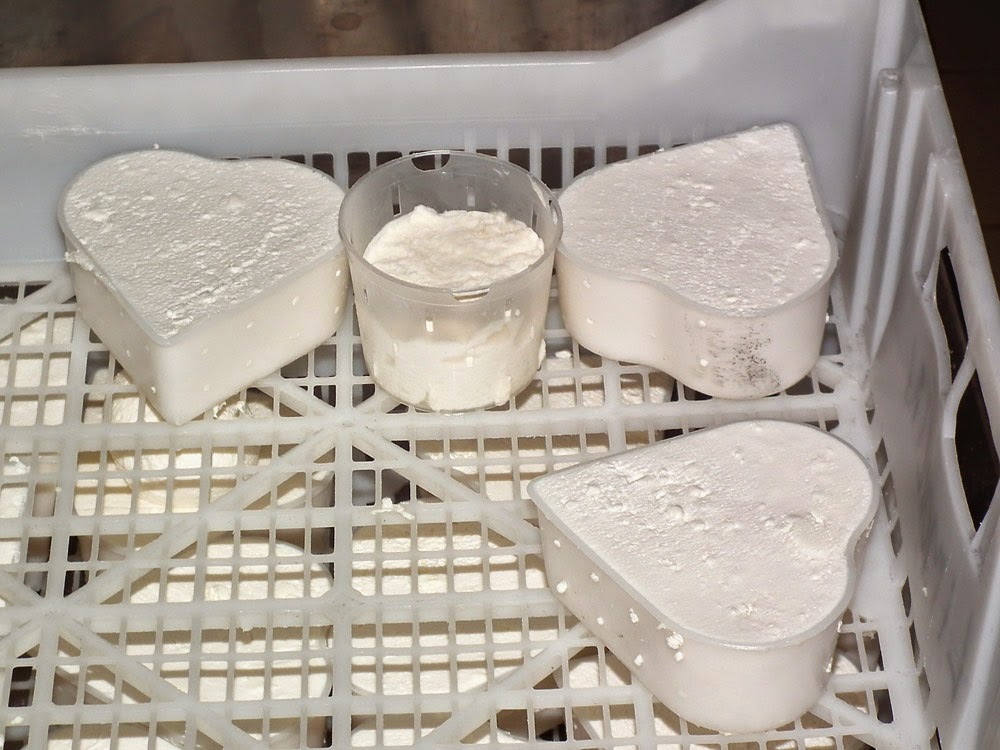 The fresh cheeses will be left to drain in their moulds for some hours then tipped out to dry and be coated in ash or salt (or usually a mixture of the two) when firm enough. There is nothing special about the salt used but the ash must be pharmaceutical grade. Cheesemakers are not allowed to make their own as they would have in the old days. The whey, an inevitable by-product of cheesemaking, will be stored and periodically spread on the fields as fertilizer. Some goat dairies have an arrangement with a pig farmer and the whey is fed to the pigs, but often this is not practical because there may not be a nearby pork producer or the farm does not have suitable storage or transport options. 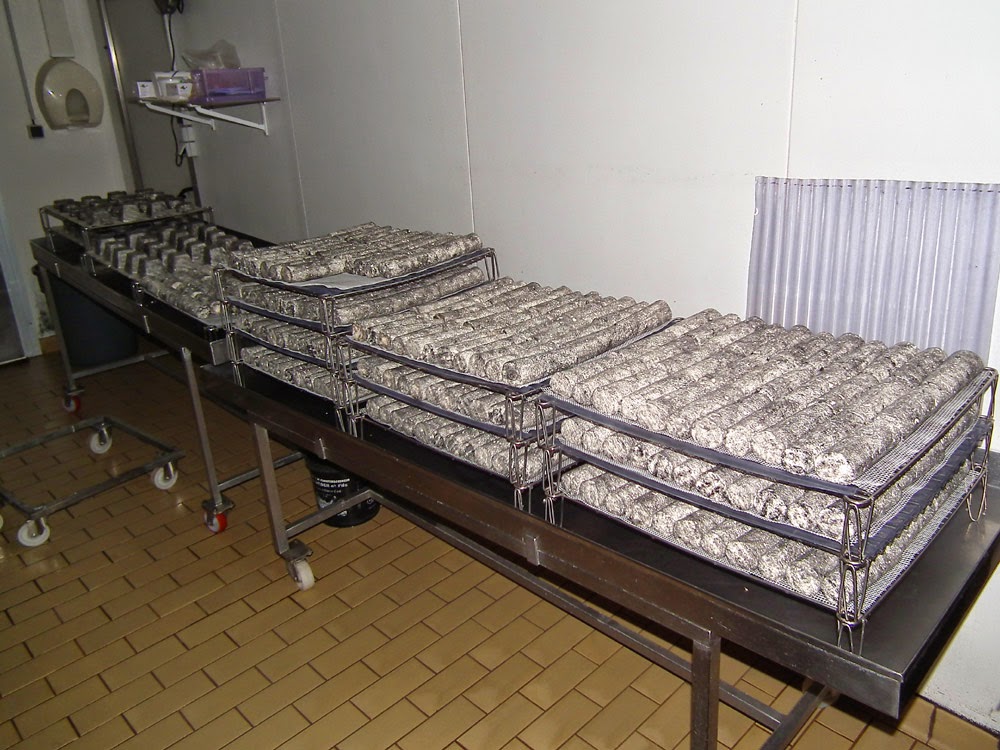 These fresh logs of Sainte Maure de Touraine have been newly coated with an ash and salt mixture. This is gently rubbed on by hand and is quite a messy job. These ones have not yet had their rye straw inserted, but that is the next step. The straw is apparently to add a bit of rigidity to the soft log. Sometimes they are not ashed, but sold at this stage, very young, as fresh cheese.


Two to three day old cheeses in the drying room. 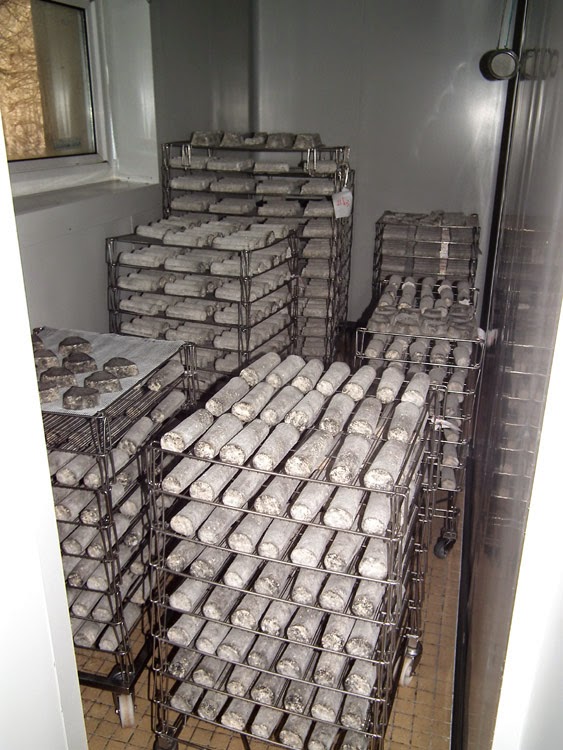 These cheeses will be ready for sale in two to three weeks. That's by far the most popular stage to eat this type of cheese, but they can be dried for longer, which will make them much stronger in flavour and eventually hard enough to grate. The older cheeses are not to everyone's taste. The younger ones are creamy, developing some chalkiness with age as they dry, then a really dry cheese that is more rubbery and very peppery in taste.

All the cheeses in the photos are the same apart from their shape, and this is what gives them different characteristics, as they dry at different rates and in different proportions. As well as the soft logs, pyramids, hearts, disks and bricks in the photos, the Limouzin dairy also makes a tomme style cheese, which is a hard cheese in the style of those made in the mountains.
Posted by Susan at 09:00

A very labour intensive business as I suppose most cheese making still is. Pharmaceutical grade ash?? How do they make that??C

Very nice post again, Susan...
we had some of Laurent Joumier's cheese for our meal last night...
one of his pyramids... soft, dry, sweet in the mouth... just beginning to run a bit at the sides...
and a new one...
a thinner disc than normal... looking a bit like a pork-pie hat... harder, crumblier, saltier... not runny, but it had changed texture at the sides.
Both were the same age...
oh, and we had some of his male kids as rillette as well!

No idea, but I assume it's the same as the charcoal tablets you can buy for human consumption.

We would have visited Laurent but he proved to be remarkably difficult to contact. The mobile phone number on his business card is wrong so I ended up having a conversation with a thoroughly bemused person who wasn't Laurent, and he takes an age to respond to emails.

The very dry goat cheeses are good finely grated as a topping for a green salad (that's what the Ferme Auberge de la Lionnière serves) or for hot pasta, with a little cream. Delicious.

I wasn't a fan of goat's cheese before we moved to LPP but I've recently acquired a taste for the medium aged cheese. The boucherie at LPP sells the logs made by Limouzin freres which is very nice.

That's how I use the aged cheese too.

Simon wasn't a fan either until we started coming here.

Well, that was a very interesting post. My son used to love fresh goat's cheese (at the fromage blanc stage) so I always bought it in the spring which is the only time it was available in the cheese shop in Paris.

This time of year is certainly when the fromage blanc is best, but these days it's available all year because of the way herds are managed.