Paulette Richon (1897 - 1987) was an artist who lived in Preuilly for the latter part of her life. She trained at the Arts Decoratifs de Paris, where she was a brilliant student. Immediately after her graduation in 1921 she left for the Ecole des Beaux-Arts in Tours, where she had taken a job as a teacher of decorative and applied arts. She stayed there until her retirement in 1961. A woman of strong character, interested in everything, inventive, she worked in sculpture, tapestry, stained glass, woodcuts and painting. She had a genuine talent as a painter, as demonstrated by her self-portrait, done in the early 1930s. As a sculptor she was vigorous, working in the open air, sometimes with a tarpaulin shelter to protect against the elements, all the while merrily chain smoking. 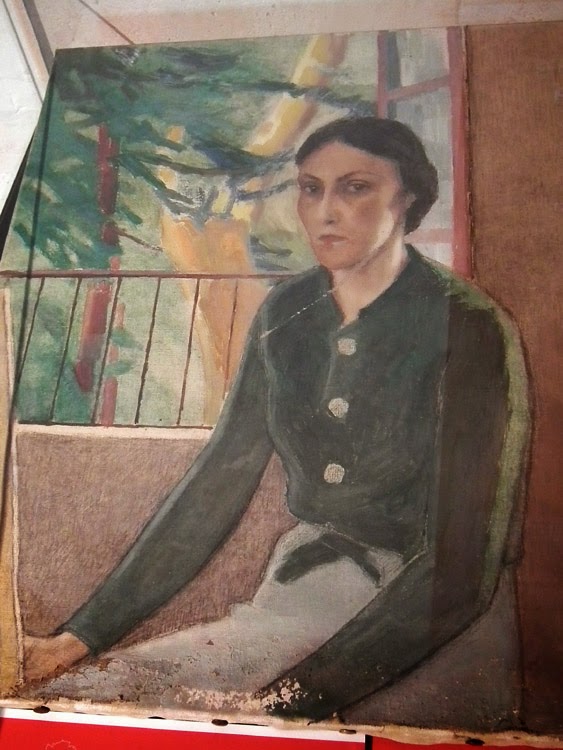 She had a very active career as an artist, but she also acted more as a facilitator or curator of significant exhibitions and art spaces at the Tours City Hall. She showed numerous decorative objects, which are now mostly lost or forgotten.


Preparatory maquette for the statue of the Sacred Heart of Chinon,
Paulette Richon, plaster, 1941. 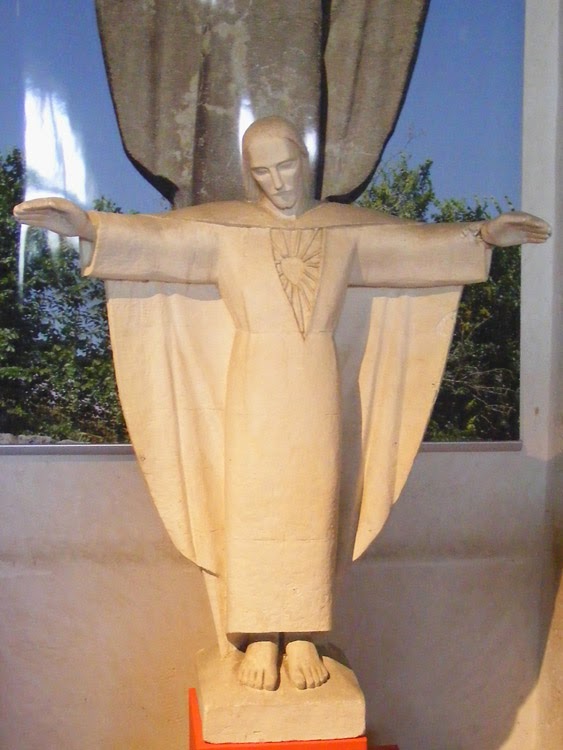 One of her most significant works is a 7.4 m high statue of Christ that watches over Chinon. The story goes that the local priest knew the statue of Christ the Redeemer in Rio de Janeiro. He announced from the pulpit in April 1940 a solemn vow to erect a monumental statue of the Sacred Heart on the hillside of Chinon. His intention was no doubt to have a work in imitation of the one in Rio.


Stations of the cross, made by Paulette Richon for the church at Ferrière Larçon, 1932.
(Photographed in an exhibition in Loches.) 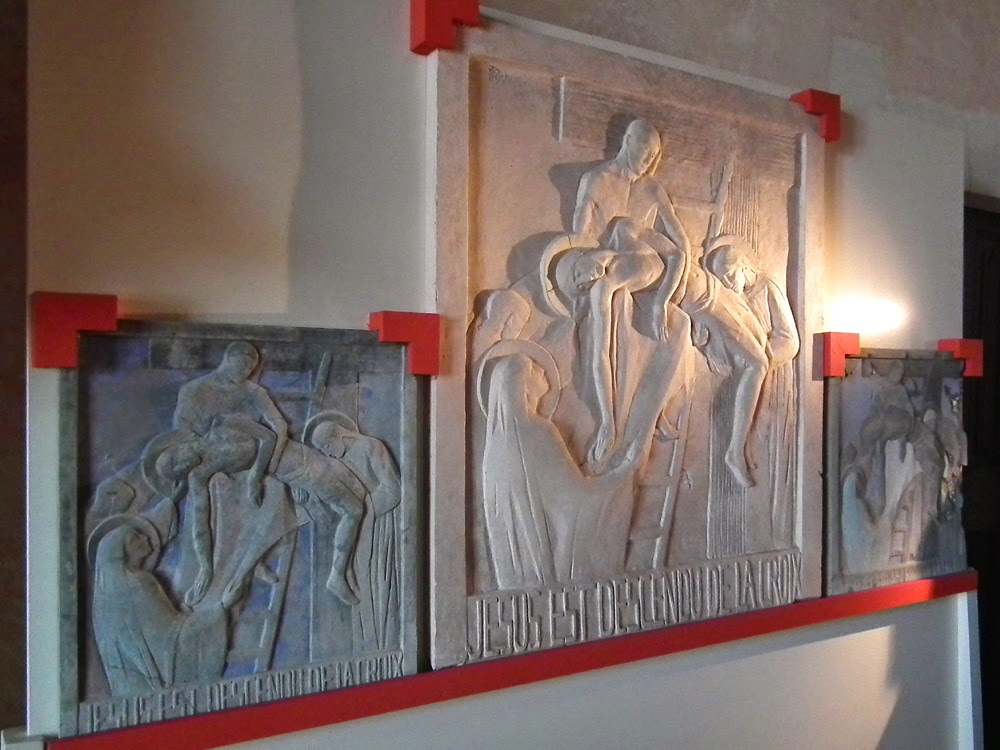 On 21 June 1940 Chinon was occupied by German troops. Undaunted, the priest got in touch with Paulette Richon, 43 years old and already with a solid reputation for her sculpture. He also contacted a local architect and Charles Jaillais, boss of a dynamic and highly regarded Chinon masonry firm, was appointed to set the statue in place. It was audacious given the extreme poverty caused by the war. A bit before Christmas 1940 the work on the base was well advanced, but was interrupted because of the severity of the winter.

On 16 June 1941 the statue was blessed, in the teeth of the German authorities who had only sanctioned a procession of 50 people, but could not prevent a loyal crowd from massing in the streets, singing and heading up the slope, clamouring enthusiastically and singing 'opinionated' songs.

The outstretched arms of the statue reach 4.1 m. The concrete to make the work had to be mixed by hand due to the difficult location and the fine details in cement were trowelled on then shaped by the artist. The statue and its quadripedal stand weigh 14 tonnes. 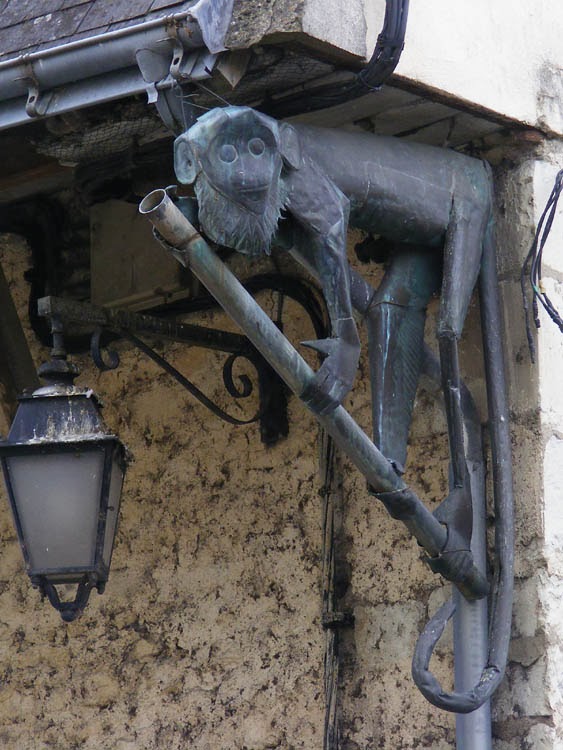 It's not a slavish copy of the Rio Christ (also the work of a French artist). Richon's Christ is more stripped down, more geometric, with a generous cloak that is conceived like the sail of a ship and not draped around the body like at Rio. The face is almost brutalist, to catch the light and appear more expressive from a distance, in the spirit of some sculptures in cathedrals, placed up high and where the head is proportionally too large, to take into account the perspective of looking up at them.

The work, like at Rio, is Art Deco in style, using stylised shapes, simple surface treatments, a calculated geometry and an absence of realistic details, no doubt judged by the artist to be superfluous. The work eschews trying to seduce the viewer and instead asserts itself almost brutally -- perhaps to reflect the hard reality of wartime.

Amongst several commissions for monuments that Paulette Richon received in the immediate post-war period, the Monument to the Resistance in Loches, perfectly positioned in the Place du Palais de Justice de Loches around 1947 presents the same characteristics of sobriety and strength that the artist has rendered with drama and intensity, without sentimentality or ostentation.


One of the stations of the cross made for Ferrière Larçon church.
(Photographed in an exhibition in Loches.) 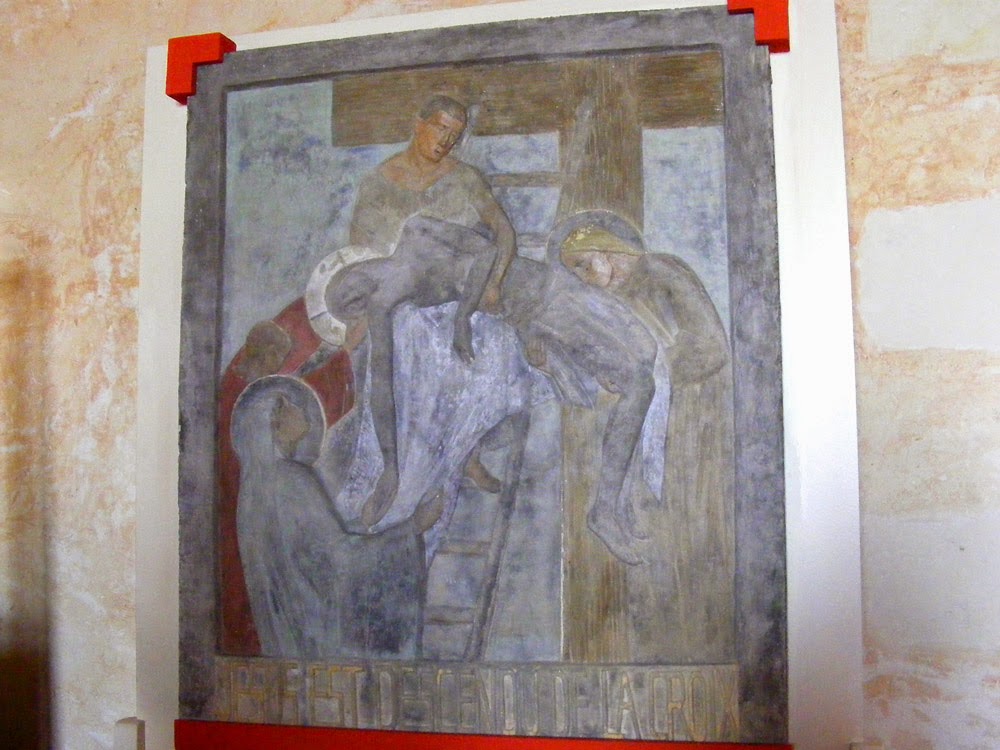 Amongst her most important commissions were the Stations of the Cross, made in low relief reinforced cement and painted as fresco in 1932 for the church at Ferrière Larçon. Another is the monument to the martyrs of Maillé (on the A10 at the turnoff to Maillé). She is also the creator of the war memorial in Yzeures sur Creuse and the monument to the Resistance in Descartes. 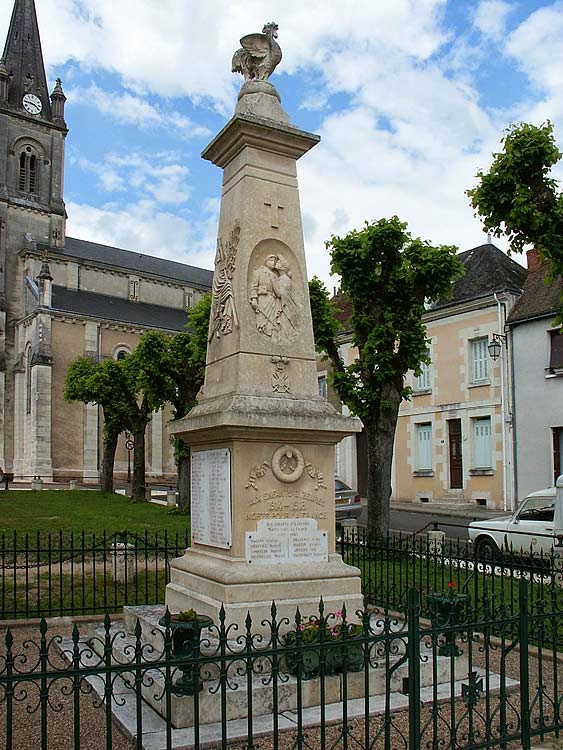 Born in Nancy, Jacques Walter (1931 - 2013) came to live in Preuilly sur Claise in 1955.  The nephew of Paulette Richon, she encouraged his artistic ambitions. He married a local girl and settled down with his family just outside of town. 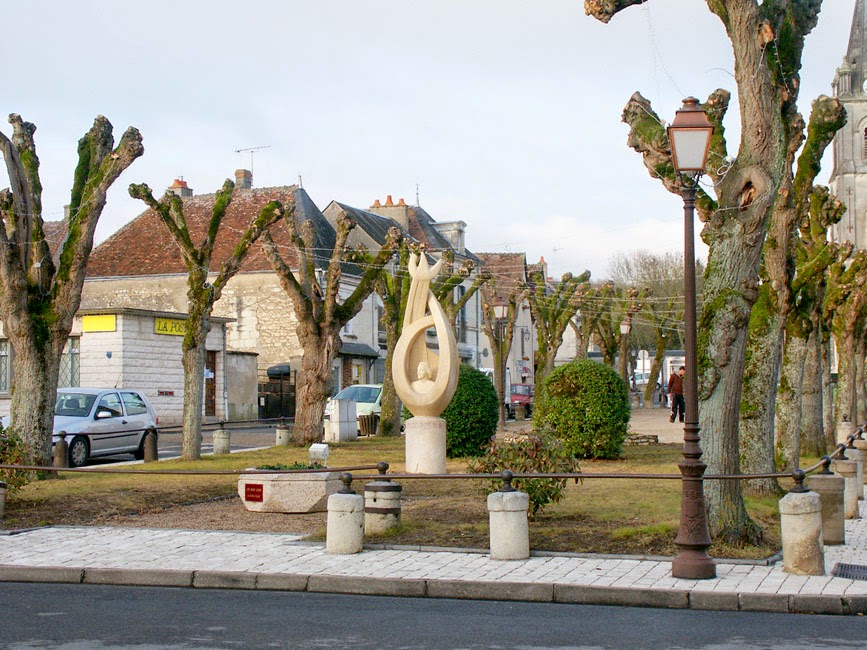 In 1961, when Paulette retired from the Beaux-Arts, they formed a sculpture workshop called Ricwal at Preuilly. This partnership resulted in the production of some highly original works in slate and embossed and tinned copper, as well as the more standard media of wood and stone. They concentrated on sacred art and their work is to be found in churches and religious communities all over the Touraine as well as Poitiers, Toulouse and Nancy. Their best known secular work is the memorial to the opera singer Mado Robin in Yzeures sur Creuse.
Posted by Susan at 09:00

A truly talented lady. Thanks for the information. We will look out for their work.

A wonderful... if perhaps rather severe [see self portrait].... lady....
I feel that with her Christ for Chinon, she has gone a good few paces beyond Art Deco...
or even the late 30s "austerity" art...
she has pared the sculpture down even further...
and left the bare-bones....
making it, in my opinion, far stronger an image...
it is great, part crucifix, part person...
and I have always like her....
[or as I now discover, their]...
Mado Robin memorial.
Thanks for the info!
I hope her monkey is listed...
I'd hate to see that go!

There is lots around, once you know about it.

I don't think the monkey is listed. I don't know who owns the house now. Some time ago one of the copper geese on the shutters disappeared, but I assume for safekeeping.