SNCF, the French national railway company, installed pianos in selected stations all over France in 2014. They were for any passing member of the public to play, and play them they did. The piano seat was rarely empty in Tours Centre or Paris Montparnasse last year when I passed through.


Someone in transit at Paris Montparnasse railway station playing the piano.
He was rather good. 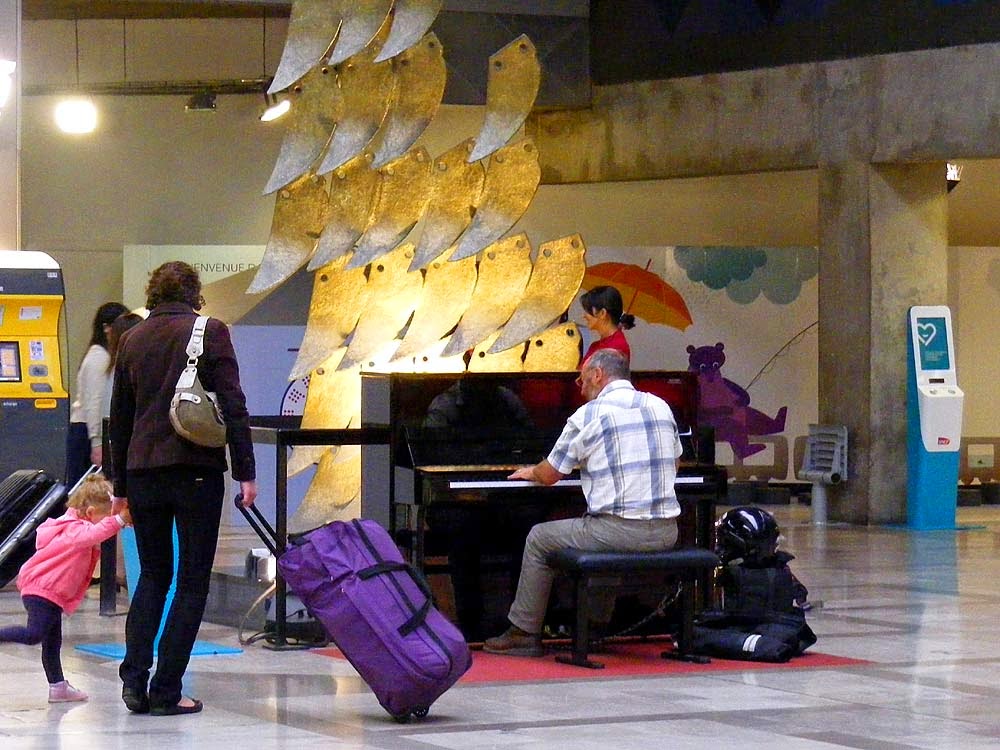 The one in Montparnasse was apparently not as popular with shop owners as it was with the public. They complained that too many players were really bad and the noise was awful. As a compromise the piano was moved around the station so no one got to suffer for too long.

Keen pianists could record their efforts and post them on the internet for judging at the end of the year. The winner of the competition was 12 year old Jean Cotro from Tours, chosen from 900 entries.To see his video click here.

That kid from Tours was amazing on the piano.

If you listen without watching the video you'd never guess he was just 12.

Hi, Susan. The kid is playing Herbie Hancock's 1964 hit, "Cantaloupe Island". It's nice hear the jazz classic being played in the center of France 50 years after its release...by a 12 year old, no less!
http://youtu.be/cqwmDNPegnM

It's a "thing". There was a time when they were scattered all over central London, for a reason I can't now remember, but now I think the only one is in St Pancras station; and there was one in Amsterdam Central Station when I was there in January.

Thanks for the link to the original.

I was quite interested at how readily people sat down and played them. Perhaps that's why they keep popping up in places -- they really work, even if they are a gimick.

Impressive stuff from the 12 yr old.
As you say a gimmick, but, a nice one [assuming whoever is playing has a reasonable level :-)]

Great idea, wasn't it? I also loved the colourful pianos around Paris for the Fête de la Musique in 2012. They had them in the Palais Royal so we were able to get up close http://www.aussieinfrance.com/2012/06/la-fete-de-la-musique/

I have a vague idea Poitiers had a street piano in the square in front of the Palais de Justice a couple of years ago too.

There was one at Montparnasse in 2013 too.

Maybe it was a pilot? I don't remember it.