Anne of France was the eldest daughter of King Louis XI. When her father died Anne was 22 and her brother Charles VIII was 13, so Anne and her husband (Peter of Bourbon) stood as his regent.

Anne had been described by her Father as "the least foolish woman in France", and this appears to have summed her up nicely. Amongst her acheivements she managed to pick the winning side in the War of the Roses (she sent troops to support Henry Tudor, later Henry VII), end the 100 years war (she signed the Treaty of Etaples in 1492) and engineered the marriage of Charles VIII to Anne, Dutchess of Britanny in order to bring Britanny under French control. 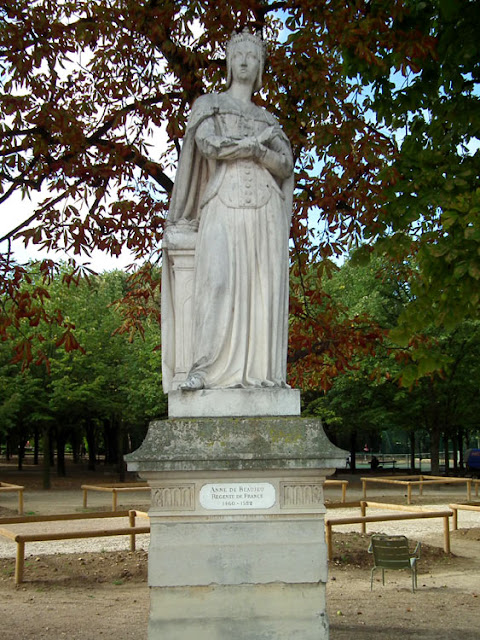 This last action proved somewhat to be Anne of France's downfall - when the regency finished Anne of Britanny had her and Peter removed from court in revenge for reducing the independence of Britanny. They retreated to Peter's territories, which they immediately started to enlarge (in more than one way - they had a child, Suzanna). When Peter died in 1503 Anne became Duchess of Bourbon in her own right.

When Anne died in 1522 the family line became extinct, Suzanna having died the year earlier.

The Jardin du Luxembourg has statues of 20 French Queens and Illustrious women. The subjects were chosen by Louis-Philippe I in 1843. This statue was created by Jacques-Édouard Gatteaux in 1847. To see this statue of Anne you have to go here.

To French school children, Anne de France is better known under her married name, Anne de Beaujeu.
As you said, her father, Louis XI, married her to Pierre de Beaujeu, duke of Bourbon.

I just noticed that, on the pedestal of the statue, she's referred to as Anne de Beaujeu and not as Anne de France.

I noticed that, and decided to take the 19th century line on her name to reduce confusion (mainly mine, I will admit!)Too many Anne's to start making any decisions about what to call them.