Anne of Austria was born in Spain in 1601 and was the eldest daughter of King Philip III of Spain. Her titles included Infanta of Spain and of Portugal and Archduchess of Austria.

When she was 11 she was bethrothed to Louis XIII of France, as part of the 1559 treaty that ended the war between the two nations. She and Louis were married in 1615, on the same day that her brother (later Philip IV of Spain) married Louis' sister (Elisabeth of France). It wasn't a particularly happy marriage as Anne was constantly in conflict with the woman who saw herself as the real queen of France, Louis' mother Marie de Medici. 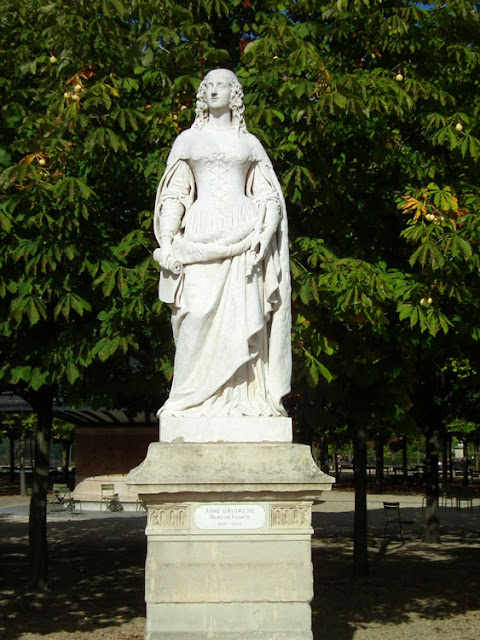 A later palace coup meant that Marie de Medici lost her power, to be replaced in turn by Charles d'Albert, Duke of Luynes (with whom Anne had a good relationship) and then Cardinal Richelieu. Once again Anne found herself in conflict with her husband's chief advisor, a position not helped by France declaring war on Spain in 1635.

Although she had a series of stillbirths, in 1638 Anne gave birth to an heir (later to become Louis XIV) and then in 1640 a spare (Philippe de France, Duke of Anjou). In 1643 Louis XIII died, and Anne contrived to have herself created regent for her son (against the late king's wishes). She remained regent until Louis XIV came of age, and then was the power behind the throne until 1661 - at which stage she went and did the nun thing. She died in 1666 and  is a central figure in Alexandre Dumas' "The Three Musketeers".

The Jardin du Luxembourg has statues of 20 French Queens and Illustrious women. The subjects were chosen by  Louis-Philippe I  in 1843. This statue was created by Joseph-Marius Ramus in 1847. To see Anne of Austria you have to go here.