Not a random and improbable event that turns out to have major consequences nor a restaurant in Yorkshire, but an elegant Australian bird. They are popular as captive wild fowl on grand estate ponds in France. This one was photographed in the grounds of the chateau of Cheverny. The green isn't algae, but a reflection of the trees that surround the lake. 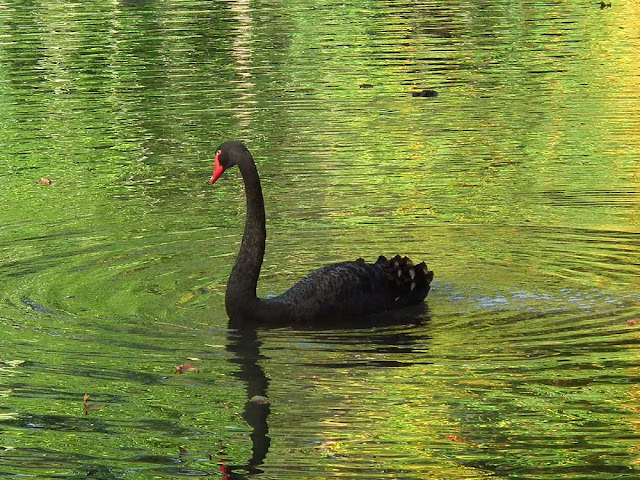 The Black Swan Cynus atratus is a nomadic species of the southern half of Australia. They move from place to place depending on the weather and water levels, in search of food and suitable conditions for breeding, which can be in any season, but usually during winter. In the wild they can be present as pairs of birds or aggregations of many more birds, even hundreds gathered in the same place. They will establish themselves on fresh, brackish or salt water, lakes, rivers or wetlands. They eat aquatic plants and algae.

Until Dutch explorer Willem van Vlamingh and his crew spotted them on the coast of Western Australia in 1697, the idea of a black swan was used as a metaphor for something that didn't exist. In the 21st century the Black Swan Theory has been developed to explain rare, unpredictable, high-profile events that have a major effect on history, finance, or science. One of the criteria for pronouncing an event a Black Swan is that it is subjected to post hoc rationalisation, as if it was an event that could have been predicted. The development of the internet, the end of the Soviet Union, and the destruction of the World Trade Centre by terrorists all qualify as Black Swan events. So does Brexit in my opinion.

Email ThisBlogThis!Share to TwitterShare to FacebookShare to Pinterest
Labels: Australia, nature and wildlife, Pictures of Chateaux

Thanks for the link to the Black Swan Theory, read it, understood it, moved on to Kurtosis Theory, and now have (I'm sorry to say) forgotten it all. It cost me a €1 as Wiki are after money again!

Beautiful photo and interesting information. I guess Trump's election was a black swan event, but given his apparent racism he would hate the expression.

He would probably claim to be able to predict Black Swan events because he's so much smarter than anyone else.