Anne of Brittany, born in 1477, was Duchess of Brittany in her own right and Queen Consort of France twice. During the Italian Wars she was also Queen Consort of Naples and Duchess Consort of Milan. Her father died when she was 12, leaving her the sole heir to the strategically valuable duchy of Brittany. A year later, to protect herself from the French she married Maximillian I of Austria, by proxy. The French royal family, led by the redoubtable Anne of Beaujeu, determined to put a stop to her independence and invaded Brittany. Anne was essentially kidnapped and brought to Langeais castle, where she was forced to marry the young Charles VIII.

When Charles managed to kill himself by hitting his head on a door lintel whilst running to catch a tennis match in the chateau of Amboise, Anne hightailed it back to Brittany. Sadly for her, the next king, Louis XII, was prepared to ruthlessly put aside his wife and forced Anne to return to court and marry him. Anne lived a life overwhelmed by the politics of her time and the need for the French kings to produce an heir and a spare. In the end, she never managed to produce a son who lived to adulthood. 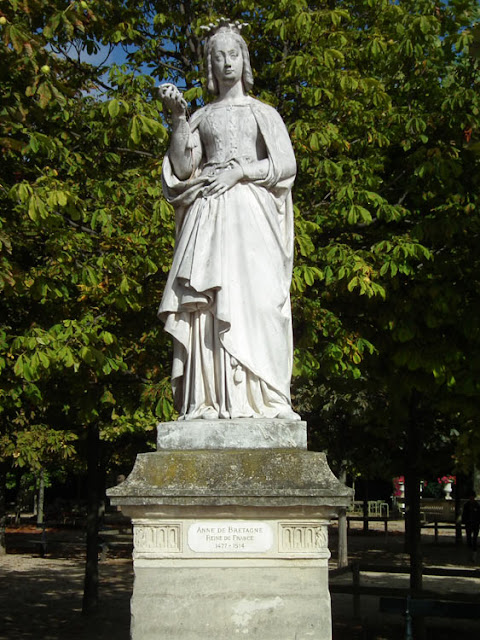 Anne died in 1514 and was buried in Nantes (her heart) and St Denis (the rest). At no stage during her life was she a nun, as she pre-deceased her last husband, worn out by constant pregnancies and infant mortalities.

The Jardin du Luxembourg has statues of 20 French Queens and Illustrious women. The subjects were chosen by  Louis-Philippe I  in 1843. This statue was created by Jean-Baptiste Joseph Debay in 1846. To see Anne de Bretagne being statuesque you have to go here.