The other day I got a phone call on my mobile. I was driving home from work and had got to Le Louroux. The caller was Simon, who told me he needed me to return to Saint Branchs. He had dropped off our clients at their hotel and was coming home in Claudette, but had developed a terrible migraine. He couldn't drive any further. 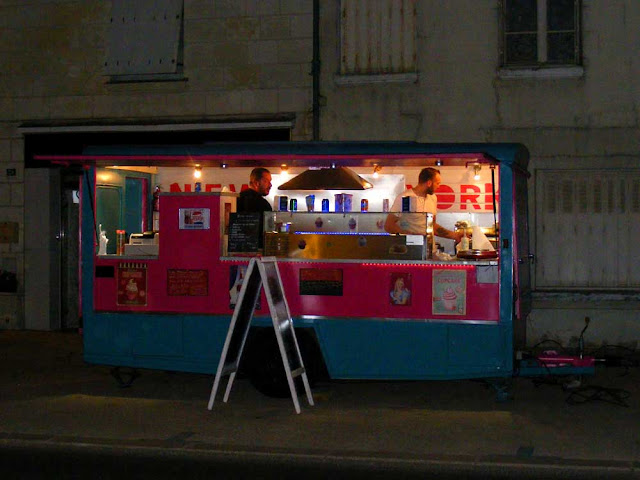 I got back to Saint Branchs to find him in the carpark by the church. He wanted water, but all the shops were closed. I spotted a man in a fireman's uniform in his front yard talking on his mobile phone, so I approached him. When I explained the situation the man, Bertrand, was kindness itself. He filled up my water bottle, moistened a towel to use as a compress and offered to look after Claudette in his back yard until we could return for her. What a relief! 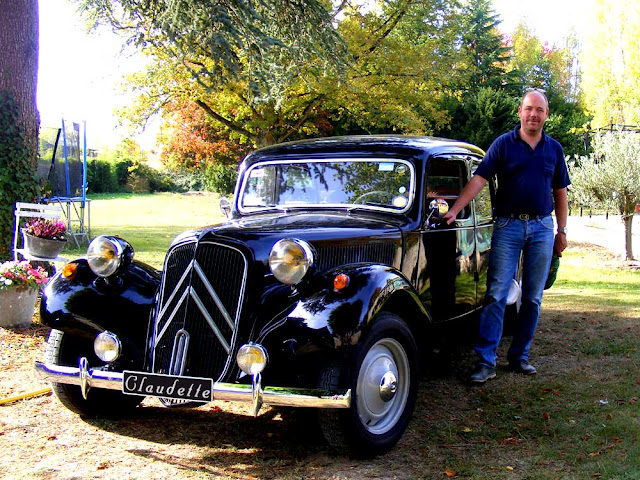 After he had managed to manoeuvere Claudette through Bertrand's gates I got Simon into our modern car and drove off. We only got as far as the bus stop between Saint Branchs and Le Louroux. The movement of the car was too much for Simon and we had to stop.

After a considerable time Simon felt capable of continuing, but once again, we didn't get far. This time we reached Manthelan and I parked outside the salle des fêtes. Simon tried to get comfortable in the car and I decided to take a walk.

It was starting to get dark, but the temperature was 22°C. I happily wandered about the village for a while, somewhere I've never really explored before. When I returned to the main street because it was dark there was a burger van set up on the pavement. I thought I might as well order a burger. The choice was extensive but finally I opted for a chicken burger with two sorts of cheese, an egg, onion marmalade, lettuce and tomato in a standard burger bun and served with chips for €8.50. The burger chef said it would be 20 minutes so I wandered about a bit more. I checked out the public toilets (next to the town hall, clean and with toilet paper). When I went back to collect my dinner there were two other customers. One of them was collecting six or eight burgers, and I assume was the reason my order took 20 minutes. I bore off my prize and sat on a bench in front of the town hall, in the dark, to eat it. It was good. I didn't want to take it back to the car in case the smell was more than Simon could bear (he'd already thrown up in the bushes several times).

Finally I returned to the car and Simon, who was semi-reclined in the back seat, said we could continue. This time we made it to Ligueil, where we made a short stop for puking at the lavoir, before eventually getting all the way home. Simon went straight to bed.

The next afternoon, despite Simon still feeling a bit fragile, we went back and retrieved Claudette. I'm sure Bertrand would kindly have kept her for several days, but we had other commitments in the upcoming days and felt we should collect Claudette immediately.

Heck I didn't realise Migraine could be so debilitating. Hope you are feeling better Simon. Bet the burger was good...

As a lifelong migraine sufferer myself I can assure you it is not just a headache.

i too get migraines....no fun.....takes a lot out of you for a couple of days at least

Oh, how miserable! I have a marvelous new neurologist who has given me a long acting beta blocker and I haven't had a proper migraine for over two months. He says there are newer migraine theories but beta blockers do work for some people.
Jocelyn

I took beta blockers for a number of years in my 20-30s. They didn't work for me so I stopped.

For years I suffered from migraines and was down for about 48 hours at a time. All that the strongest medications could do was to muffle the pain, but it would not go away. I was nauseous, my eyes would water, and I was miserable about losing out on time with my young daughter and husband. Finally was prescribed Imitrex 50 mg, and it was like a miracle. Within an hour of taking it, my migraine will lift completely. It does not suppress the pain, but somehow solves the vascular problem. Please ask your doctor about it, and try it if it is appropriate for you.