Allotments in Amboise. The plot growing maize belongs to someone from Martinique. 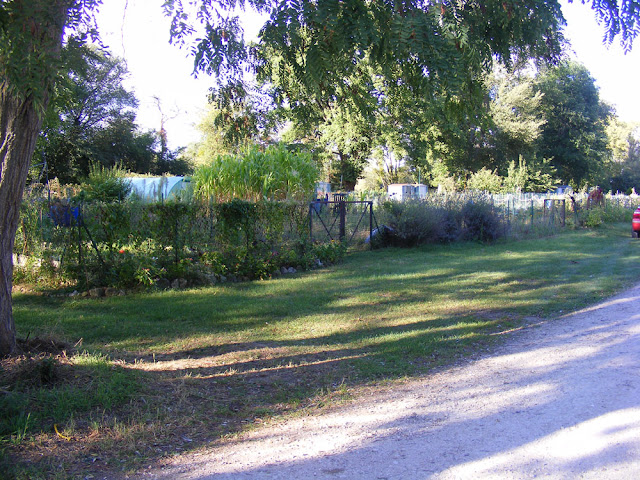 I've wanted to visit the Jardins Ouvriers in Amboise for ages, and recently I got the chance to. I emailed Dominique Berdon, the president of the allotment association and asked if he would be interested in meeting a group of American gardeners I was guiding. He very kindly said yes and we arranged to meet at the allotments (or what my American group called the community gardens).

Hot air balloons over the allotments. 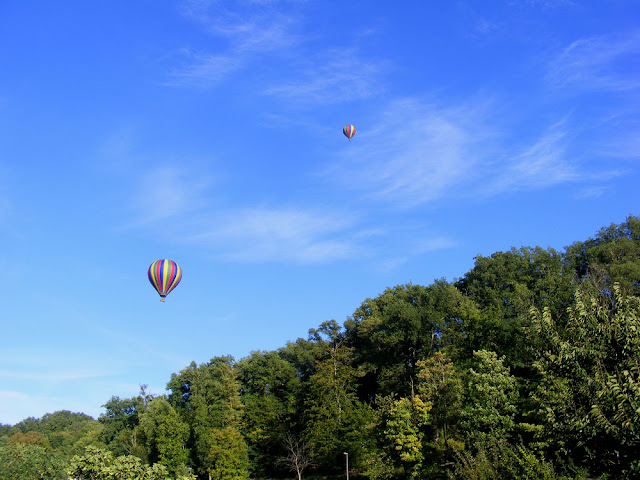 There are 89 plots in all, on two sites. The one we visited is the one at Malvau, right on the banks of the Loire River, on the western edge of Amboise. At present all the plots are 'occupied' and there is a short waiting list. The area is made up of individual plots and common areas. One of the allotment association's projects for next year is to create a common picnic and barbecue area. Many of the allotmenteers live in appartments and the allotment is their garden. The association would like to provide some of the other advantages and opportunities for being outdoors enjoying nature that a garden can provide. Dominique hopes people will start spending Sundays with their families down at the allotment and it will become a regular fun social gathering.

The American gardeners and Dominique Berdon (third from right). 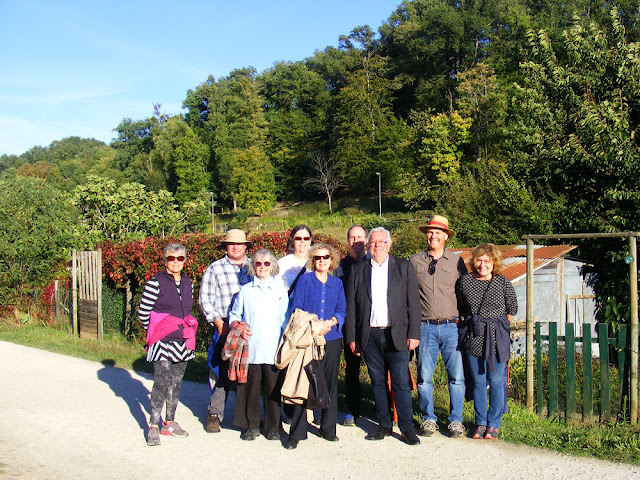 The view from the allotments. 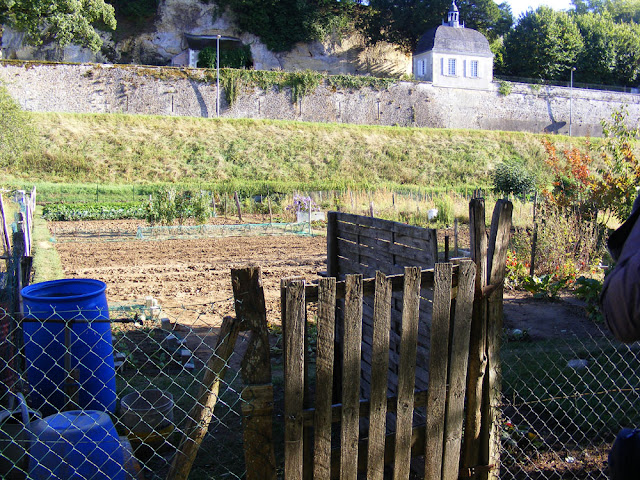 At the moment the Association is working on improving the garden sheds and installing water tanks to collect rain water. Also in the plans are improving the fencing and installing more taps. The allotmenteers have to be encouraged to stick to the rules and respect their neighbours. For example, herbicides are banned from the site, but old habits die hard, and the best one can expect from some of the allotmenteers is that they do not spray around their boundaries and allow drift into the next. The allotment holders are a microcosm of the wider society. They range in age, social condition and cultural background. These differences are no barrier to the gardening, and especially in June and July, everybody is out in the allotments, enjoying the sunny weather. 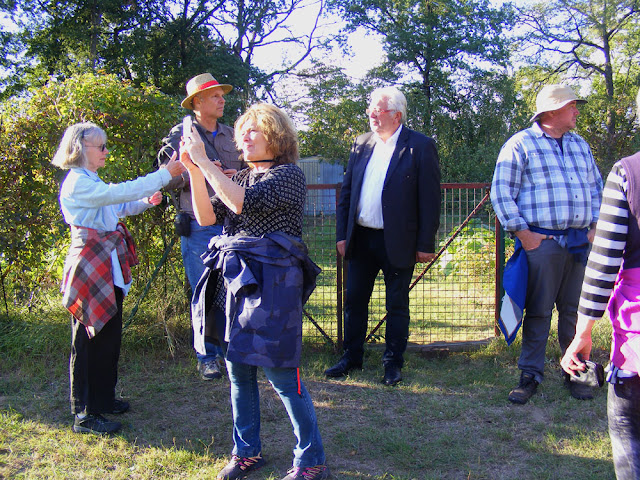 The Association provides support and advice to its members, both formally and informally, with experienced members advising novice members. The gardens are principally for growing vegetables for the families of the allotment holders, but flower growing is encouraged. It's seen as enhancing the beauty of the gardens and attracting beneficial insects.

Dominique's plot. He says it's been a bumper year. 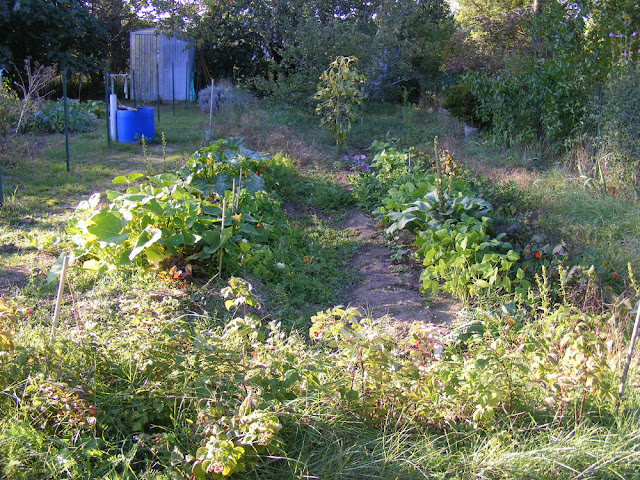 There are currently no plans to expand the allotments. There isn't enough money to acquire more land (and that adjoining the Malvau site is contaminated with waste from Citroën apparently). Dominique feels it is better to improve facilities on the land they have already.


This allotmenteer was using a broadfork and his adorable little girl was helping. 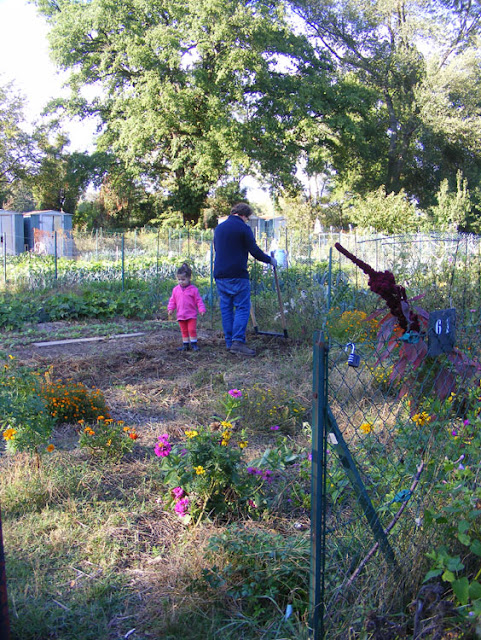 It was good of Dominique to spend some time with us as it was a chance for the Americans to see some ordinary gardens that are not intended to be show gardens and are not run by a team of professionals. He was also pleased to see us during the Journées du Patrimoine (Heritage Open Weekend) as although the gardens are not grand heritage like the chateaux, they are local heritage nonetheless. Like most Jardins Ouvriers (Workers Gardens) they were set up originally in the 19th century by the local priest, who wanted some way of helping poor families to augment their diet and stay fit and healthy inexpensively. There is now pressure to change the name of the association to the Jardins Familiaux (Families Gardens), but Dominique is resisting, as he feels the name is an important part of the heritage.

Email ThisBlogThis!Share to TwitterShare to FacebookShare to Pinterest
Labels: Gardens and Parks

Sounds like a typical set of allotments to me.... and looks it, too.... with the "gleaned items" greenhouse!

My sister-in-law had one in Dijon. The association is very strict about what you can and can't do. She was sick at one stage and couldn't look after it so had to give it up, not her choice but the Association's. There is one along one of our bike routes with dry toilets outside which I think is an excellent idea.

Toilets on site are definitely a good idea.