Blanche de Castile (daughter of Alfonso VIII of Castile & Eleanor of England) was never intended to be a queen of France - her sister was meant to marry the future Louis VIII, son of Phillip Auguste. However, when Eleanor of Aquitaine (their grandmother ) met the two princesses she deemed Blanche the more likely one, and the deal was done.

They were married in 1200 (when Blanche was 12 and Louis 13) but the marriage wasn't consumated until 5 years later. Of her twelve children six died in infancy, the first to survive to adulthood being her fifth child, the future king (and Saint) Louis IX. She must have felt some relief when Louis VIII died in 1226.

That presented some issues, as the future saint was only 12 years old, and his father had baron problems that hadn't been resolved. Blanche appears to have been a canny operator, because she immediately had Louis IX crowned as King of France and served as his regent for about 8 years. 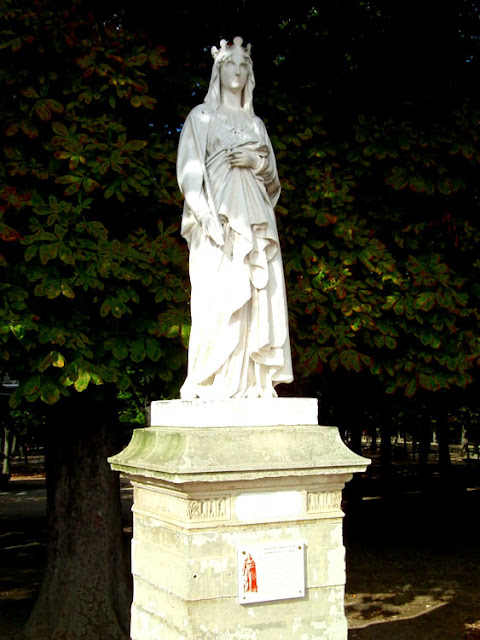 Even after Louis IX was married (in 1234, to Marguerite de Provence) Blanche appears to have exercised inordinate control, even more so when he went off on crusade in 1248 and she was once again appointed Regent in his stead. She fell ill and died in 1252, four years before Louis returned to France.

The Jardin du Luxembourg has statues of 20 French Queens and Illustrious women. The subjects were chosen by Louis-Philippe I in 1843. This statue was created by Auguste Dumont in 1848. To see this statue of Blanche you have to go here.

Informative and entertaining as ever!