I Want to be Alone

On Monday I (well - we) wrote about Anne de Bretagne, a woman much coveted for her lands and title, which although hers by right of inheritance were in control of her husbands (the Kings of France) while they were married.

I imagine this meant she was always surround by people asking favours, suggesting "cunning plans" and just plain good old spying on her every move. For anyone in court privacy was (and probably still is) at a premium, which is why this room in the Logis Royal of Loches would have been most welcome. 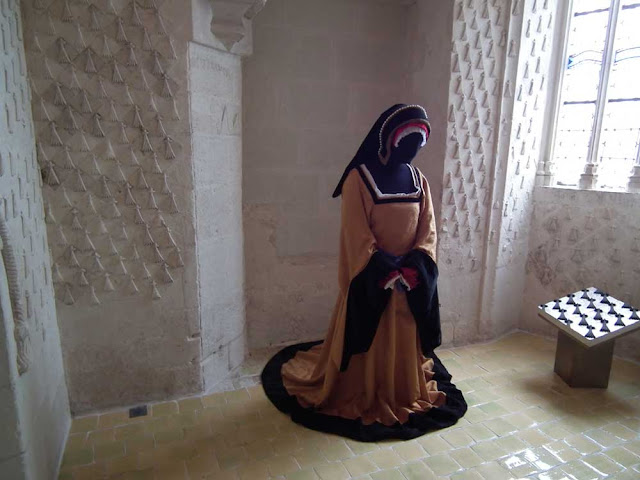 It's an Oratoire, not a chapel but a private prayer room, where Anne could have been alone with her thoughts, or maybe a good book of someone else's thoughts. No-one would ever think to disturb a lady at prayer, so she was safe whilst in there.

The room itself is tiled with representations of ermine, Anne's heraldic device. The tiles are the original and have lost their colour, but you can get an idea of how the room would have looked by the panel to the mannekin's left.
Posted by Simon at 09:00

Great! They were fun for us to write too.