When we were in Paris in September we stayed in the 14th arrondissement. Round the corner from our hotel, near Denfert-Rochereau station and Montparnasse cemetery was parked a large decoratively painted bus. We photographed it because it looked bound to be interesting. And so it was.

It is owned by Les Enfants du Canal ('the children of the canal'). They are a charity working with homeless people. The bus offers coffee, a place to rest or somewhere they can seek support. 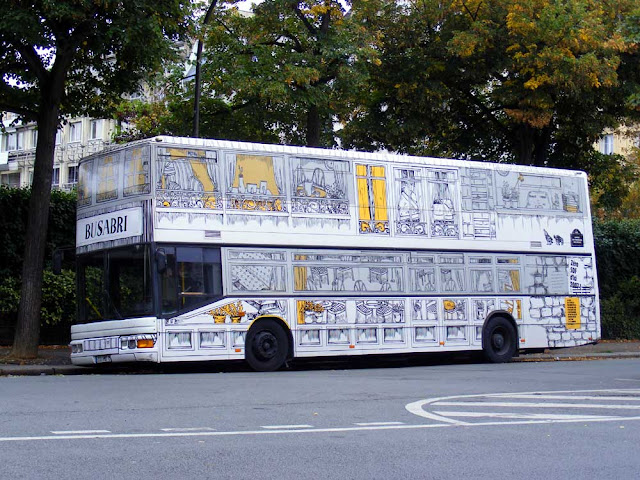 The focus on homeless people tends to be when winter starts to set in and the public are reminded by charities such as this to think of those sleeping on the streets. But les Enfants du Canal have realised that summer throws up its own challenges for the homeless. First of all, in France it is illegal to evict tenants in the winter so the newly homeless appear in droves in the summer. Also, more homeless people die in the summer than they do in winter (124 in winter compared to 143 in summer in 2014 for example).

As a result les Enfants du Canal have created this day centre in a double decker bus, known as le Bus Abri (literally, 'the bus shelter'). Their idea was to have something on the street, very informal. The bus has been parked in the 14th arrondissement in boulevard Arago since the summer of 2015, just around the corner from the prison of la Santé. It's always in the same place and homeless people can come and have a coffee, rest, talk and meet the on board social worker. Also on the bus are travailleurs pairs ('peer workers'), people who have been homeless in the past and who now work to help others in their former situation.

Great Idea and someone has had fun painting it... Did not know that about eviction in France...

What a fantastic and imaginative way of providing much needed support which is both accessible and non-confrontational/judgemental. Other cities please note! (Elizabeth)

It looks great and the concept is really sensible.