Marguerite de Provence (1221 – 20 December 1295) was the wife of King Louis IX (Saint Louis). Marguerite accompanied her husband on the Seventh Crusade, which became a disaster after the king was captured in Egypt. She raised and paid the ransom herself.


She didn't get on well with her Mother in Law (more on that later) but all reports give the impression that Louis was devoted to her. She was as devout as her husband, and a sponsor of the arts and the church, including building Sainte Chapelle. 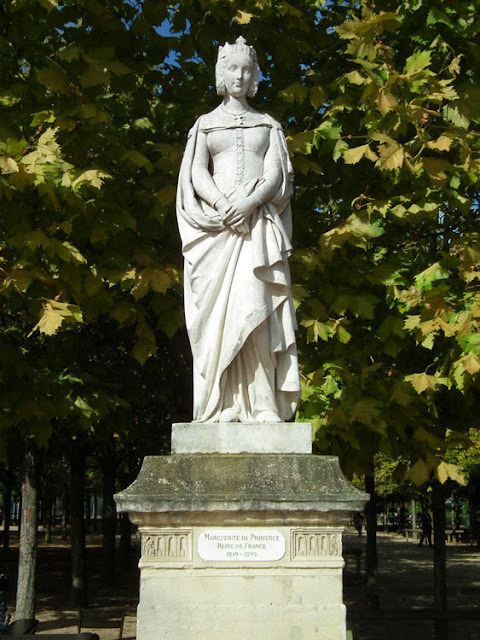 Louis went on crusade again in 1267, this time leaving Margeurite at home. He died of dysentry in Carthage in 1270. Marguerite died in Paris at the age of seventy-four, after spending the last years of her life doing the nun thing.

The Jardin du Luxembourg has statues of 20 French Queens and Illustrious women. The subjects were chosen by Louis-Philippe I in 1843. This statue was created by Honoré Husson in 1847. To see  Marguerite de Provence in all her stony faced glory you have to go here.