Stade Français rugby club was founded in 1883 and took part in the first French Championship final (which they lost 4-3) in 1892. Although they were sucessful for many years, they slipped into the lower divisions of the French league, and by 1992 were playing in the third division.

That is when their luck changed. In 1992 they were bought by the man behind the NRJ music radio and TV channel (you will see NRJ on cafe TVs at breakfast time in France if they arent showing BFM, the news channel) and he poured money into the team. They reached the "Top 14", the top division, in 1995, and won the championship in 1998. Since then they have won the Top 14 another 4 times.

The remarkable turnaround in fortune isn't the only interesting and arresting thing about Stade Français. Their traditional jersey was blue shirts, red shorts and white socks, but the image was updated with addition of "lighning flashes" on the shirt, and then in 2005 in a total change to a pink jersey.

And then in 2008 they went the whole hog, and wore shirts with a "Warhol" style image of Blanche de Castille. This was changed in 2009 to a full cartoon portrait of Blanche, maybe based on her image in the Psalter of Saint Louis. This was particulartly provocative, as Toulouse Rugby and Stade Français have a somewhat fraught relationship, and Blanche de Castille was responsible for the 1229 "Treaty of Paris" in which the Count of Toulouse submitted to Louis IX.

This is not a weird dream. This a real rugby jumper
worn by Stade Français in 2009 for their away games. 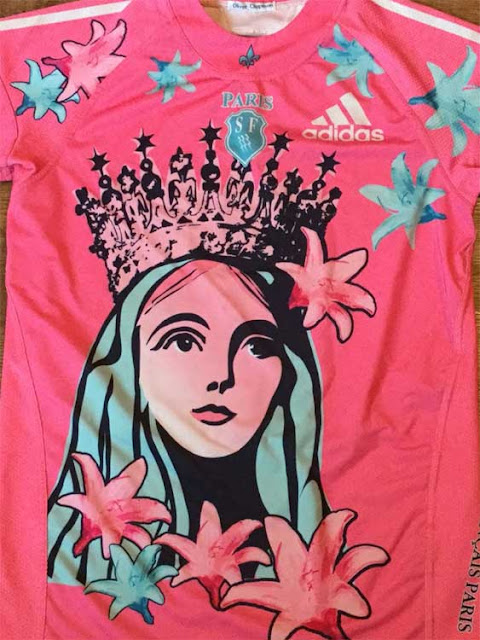 A website for those who love irony and bright colours (and showing most the Stade Stade Français shirts) is here
Posted by Simon at 09:00