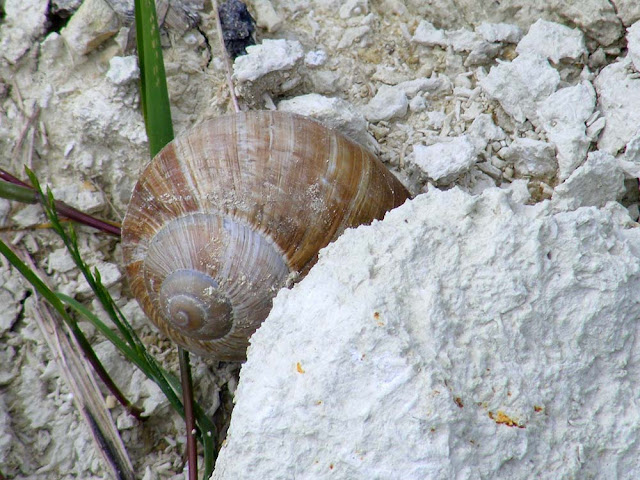 The other day I was botanising on a site that not only has fantastic orchids and other plants associated with warm limestone slopes, but also has a considerable population of Roman Snail Helix pomatia (Fr. Escargot de Bourgogne or gros blanc). Surprisingly many of the snails were out on the open chalk ground in the middle of quite a hot day (one of the few we've had this year...). What were they doing? One couple appeared to be preparing to mate, but most of the snails were on their own, and most of them, although large, were sub-adult. Were they collecting calcium for shell building (maybe the epiphragm used to seal them in the shell for estivation)? If so, why did they have to do it out in the open, which seems a bit risky? If any readers have any ideas I'd be interested to hear them.


These two appear to be courting. 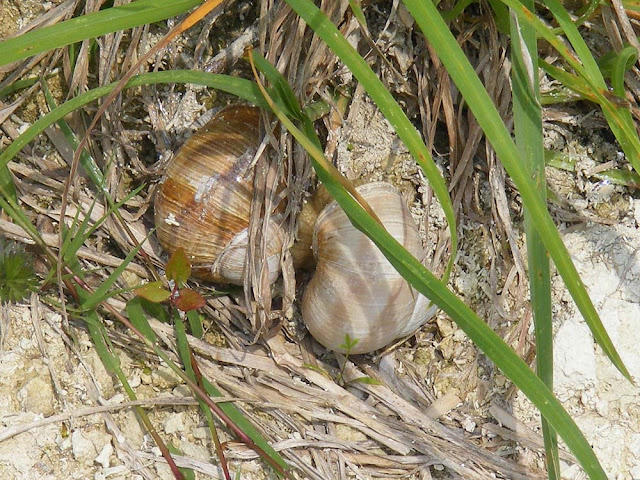 Escargots à la bourguignonne is a traditional French dish based on Helix pomatia served at the Christmas eve family dinner. Snails have been eaten by humans since the dawn of time and the Roman Snail is distributed across eastern and central France. About 30 000 tonnes of snails are consumed in France annually, of which only about a thousand tonnes are farmed in France.

The term Escargot de bourgogne is a protected name, and only Roman Snails may be used in a dish referred to as Escargot de bourgogne. The species has been protected in France since 1979 due to its declining population, and collecting and selling them is regulated. Like so many wild creatures, they are declining due to the intensification of agriculture, modern drainage and habitat loss. Collecting them during the spring breeding period (1 April to 30 June) is forbidden. Collecting and selling them between 1 July and 31 March is allowed, so long as the shell has reached a diameter of 3 cm or more. A mature snail has a white reflexed rim and they take two to seven years to reach maturity. They can live for up to 35 years, and 10 to 20 year old snails in the wild would not be uncommon.

Wild collection is insufficient to supply the market and is mainly just for personal consumption. The snails served in restaurants have sometimes come from French snail farms or more likely, imported from Poland and other Eastern European countries in great quantities and at low cost. Commercial snails must be labelled with their country of origin and where they were processed.

The only place I have ever seen these is on the bank opposite Moulin du Chevernay...just down the road.... They were huge, so much bigger than the ordinary Garden Flats!!
When I saw them, I did a "What's the Fox Hat!"
Couldn't find them when I went back with the camera a couple of days later....
And, until you started to mention Roman Snails, I had never realized they were anything different.

You tell us how they are judged to have reached maturity, but I
wonder how their actual age is calculated. Do they develop rings
on their shells? I've eaten them a couple of times just to be
polite but am not a fan.

Funny -- I saw one of these gigantic Burgundy snails on the edge of the vineyard a few days ago. I don't think I'd ever seen one before, with its beige-colored shell and fleshy white body. I hadn't taken my camera with me on the walk.

It's number of turns in the shell spiral I think.

I thought it was the number of transverse lines that was used...

You are very quiet here Simon... I have got the volume turned off just in case I hear Forage's gleeful tones!!
Besides, I've never heard a snail shout....
The bigger the operculum , the louder the shout, I suppose!