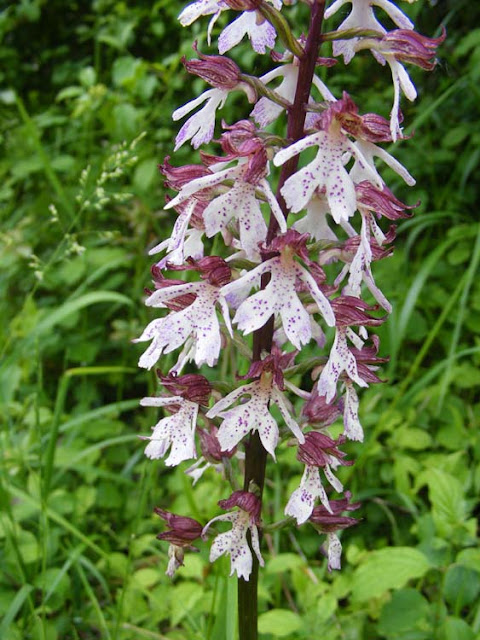 The Lady Orchid Orchis purpurea (Fr. Orchis pourpre) is easy to recognise. It's large and pretty, making it easy to spot in the grass. When you look closer though you realise that the individual flowers vary considerably from plant to plant. This is partly because the species hybridises very easily with other Orchis spp, so often what you are looking at is not 100% Lady Orchid, but a mixture (of Lady and Monkey usually, which is so common it even has a name). Each flower spike is usually made up of 40-60 individual flowers, but can be as many as 200 flowers. 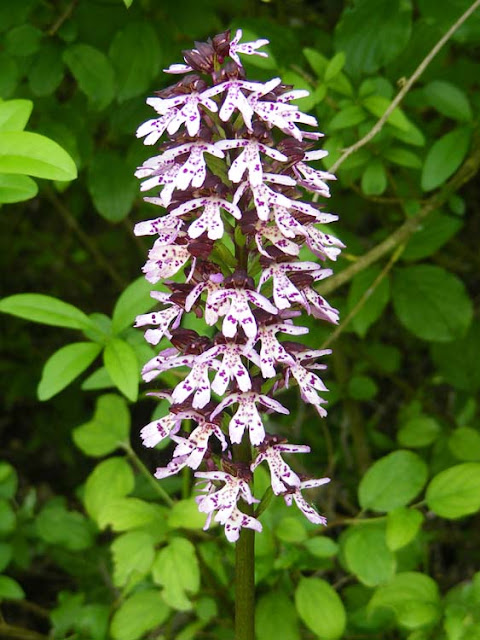 The other reason even purebred Lady Orchids are very variable I assume has to do with their somewhat haphazard and inefficient method of getting themselves pollinated. Lady Orchids are amongst those orchids known as food-deception orchids. That is to say, they present like a flower that will reward a pollinator with nectar, but in fact they offer nothing. They look like flowers that contain nectar, they emit a scent that wafts on the air to attract insects, but it's a lie. 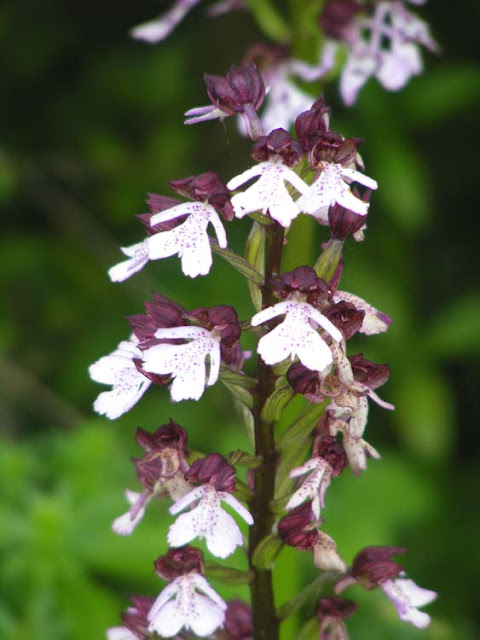 It is postulated that the reason they flower early in the season is that they require newly emerged insects who are naive. Once the insects learn the flower won't offer them anything they don't bother visiting. The rate of fertilisation is very low because even naive insects don't bother to visit flower after flower, plant after plant. Lady Orchids are quite long lived so they can get away with taking a long time to reproduce, but it is such an inefficient system it has scientists puzzled as to why it evolved in the way it did. 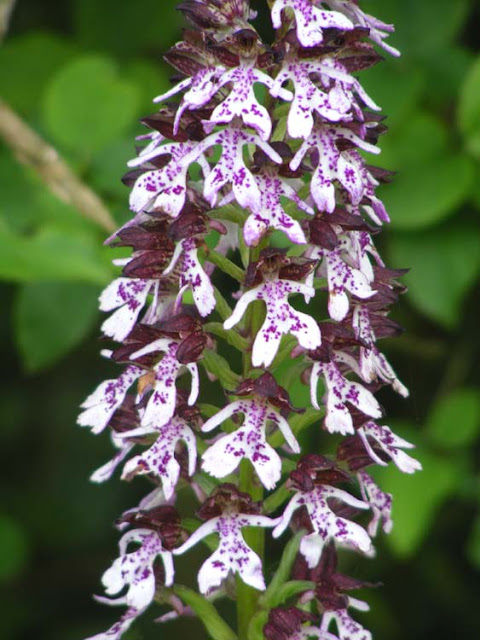 The food-deceptive species can't afford to compete with the species which offer a nectar reward. That may be another reason they flower early, as the orchids with nectar tend to flower later. Also food-deceptors are lowland species, presumably because at higher altitudes with insects in shorter supply and shorter growing seasons where they would have to compete with the nectar rewarders, their fertilization rates are so low as to be unsustainable and they die out.

Three plants growing so close they are touching, and yet each has different flowers. 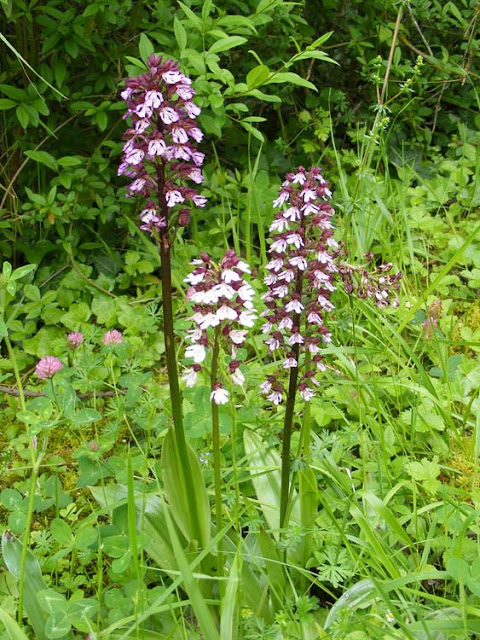 There is some debate about how the Lady Orchid got its English name. The scientific and the French names both just mean 'purple orchid'. The 'lady' may be the Virgin Mary and the name brought to England with translations of German monastic herbals in the 16th century. Or it may simply refer to the fact that the individual flowers look like a woman in a full skirt and a bonnet.

The lady seems to have come out in her combinations and no petticoat on this one. 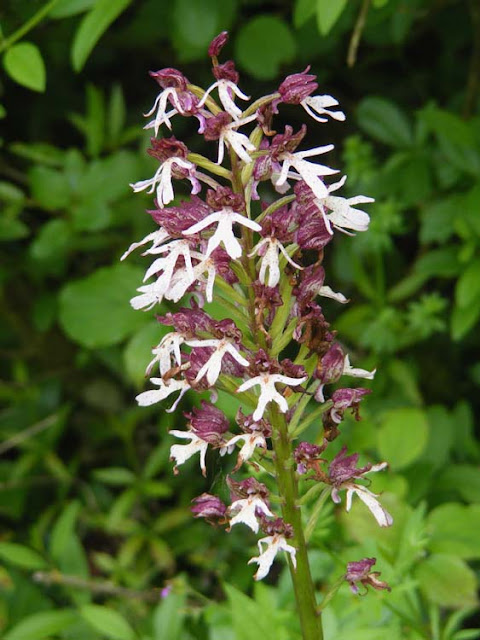 The photos in this post all come from a 50 metre stretch of rural road just outside of Marcilly sur Vienne. Colin, Elizabeth, Simon and I walked the route in late May just at the right moment to see the Lady Orchids in their prime. Check out all the different flower forms and shades.

The stretch of roadside with many orchids growing in the grass (not just Ladys). 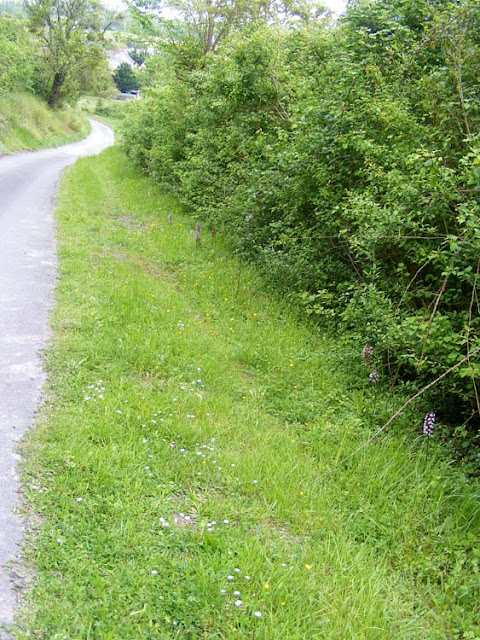 This one was hypochromatic (ie lacking pigment). 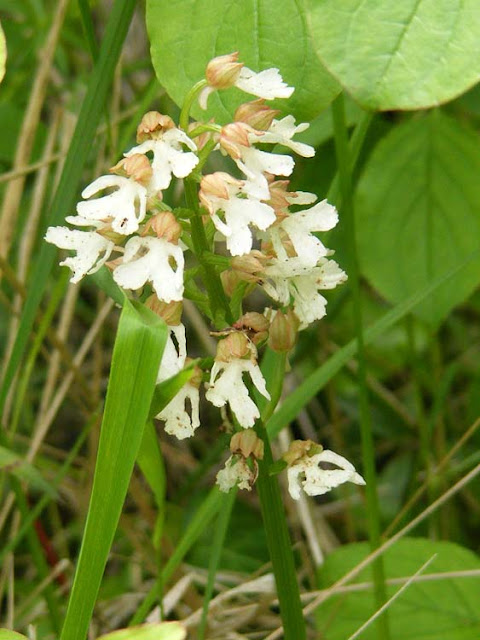 This one was very red. 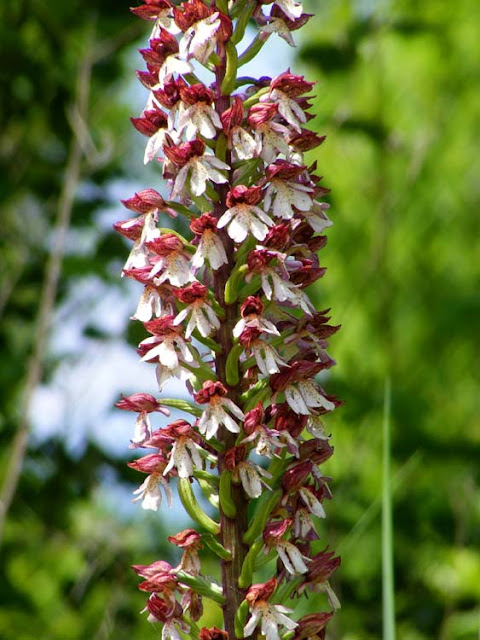 I love seeing orchids growing in the wild, they are plants of such incredible beauty and each and every one so different.