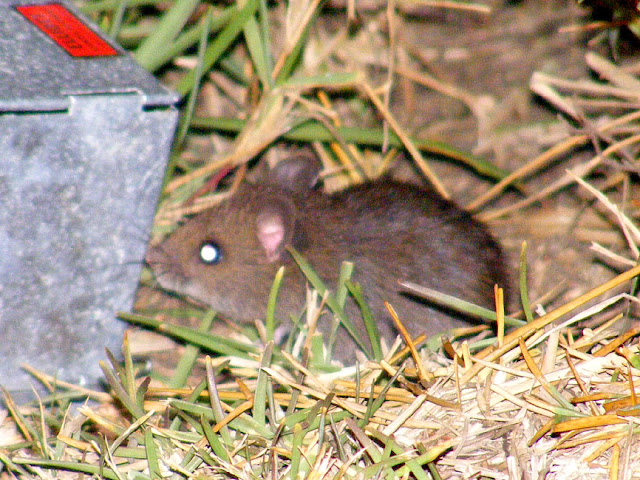 This little creature is a Bush Rat Rattus fuscipes, a species indigenous to Australia. He is about to enter an Elliott small mammal trap which has been baited with cheese.

Bush Rats occur around the southern and eastern coasts of Australia in heathland and scrub areas. They are common but rarely seen, being strictly nocturnal and don't like too much disturbance from human activity. They are omnivores, eating mainly insects but also fungi, seeds, roots and plant stems. They will also feed on nectar from flowers and are likely to be useful pollinators. The population density can reach around 10 individuals per hectare, each occupying a small home territory. Thanks to their habit of living in burrows they often survive bushfires, and their lack of fussiness about what they will eat aids them in the days after when they must forage for whatever they can find. Adult rats weigh about 125 g and are about 150 mm from nose to base of tail. Males are bigger than females and their lifespan is generally less than a year.

Bush Rats aren't very easy to distinguish physically from the other species of Rattus, both native and introduced, that occur in Australia, but research is showing that their habits and the seasonal particularities of their diet are distinct.

Elliott traps are widely used for the live capture of mammals in Australia for research purposes. Like all Australian native mammals Bush Rats are a protected species, so you need a permit to live trap.