If you're in Preuilly sur Claise today (14 June, 2016) don't drink the tapwater: apparently there is a problem. Drinking water (bottled) will be distributed from the Mairie between 10 and 12.30 today. 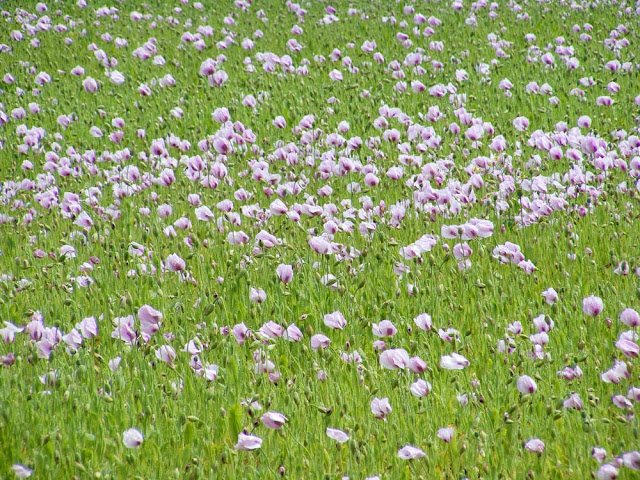 In the course of being out and about in the heart of France (in the old province of Berry, which is to the east of us and right in the middle of France) we came across two fields of Opium Poppy, in the midst of the more common crops of Barley, Berry Green Lentils and Winter Peas. 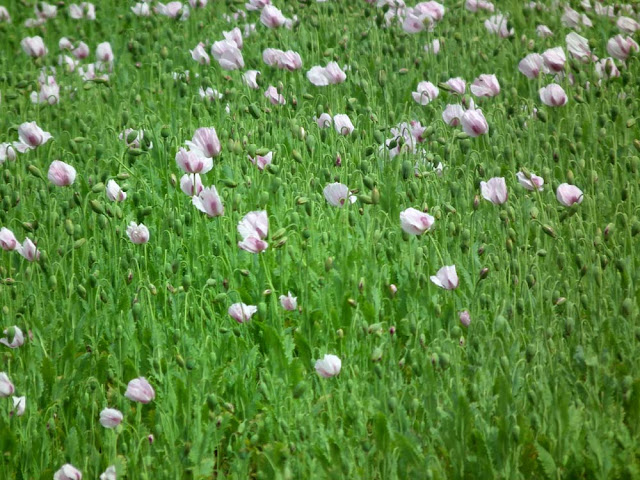 Try as we might we couldn't get any definite information about this crop. All the same, I suspect this crop might be for pharmaceutical purposes rather than for seeds for bakers. The reason is that based on the appearance of the plant and the colour of the flower I would say this is Papaver somniferum var album, often referred to as White Poppy. The seeds of this variety are white, not black, and usually processed to extract the oil which is used in the pharmaceutical industry, especially in certain cancer treatments, as a carrier for active medications. The remaining pulp also has a commercial value (I assume as animal feed), as does the 'straw' or dried poppy stems and empty seed capsules. If opiates are being manufactured from this crop it will be from the straw. According to Wikipedia, 90% of the world's legal opiates are manufactured from poppy straw, not the seeds, and not in the traditional labour intensive way of tapping the latex from the green seed capsules. 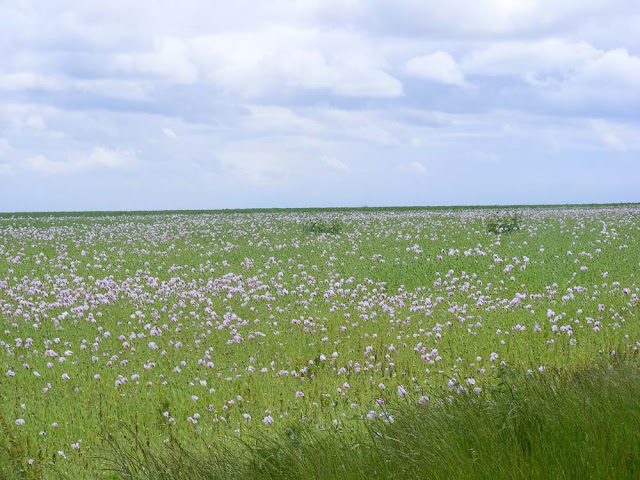 France is the fifth largest producer of poppy seeds in the world. It is one of 20 or so countries around the world where it is legal to grow opium poppies for morphine production (as is Australia, where the industry is centred in Tasmania).


Baby News: We would like to welcome Felicity Jiang-Li Stone to the family. She was born yesterday just after mid-day, and looks lovely. Of course. Grandad is pretty bemused - assuming he is going to be "grandad". Names are yet to be assigned.

Why Stay? The Brexit referendum looms and Jeff Ollerton has compiled a useful resource focusing on why Britain should stay in Europe from an environmental protection point of view.  He points out that the major environmental issues rarely respect borders. As he says, 'Species, rivers, air masses, sea currents, economic resources, waste products: all of them can (and do) move through the different countries of Europe and beyond.' As a consequence, acting unilaterally is useless and he gives some examples of successful EU directives to protect the environment.

Congratulations! A new baby always brings with it a feel-good factor. Wishing Felicity health, love and happiness...Grandad, too.

Surely it is up to Felicity to assign a name to her Gwumpy!!?

Congratulations on the birth of your Granddaughter. Hope you will be wetting the baby s head...

But that's what Susan calls me....

congrats....I just had a granddaughter in May and it is very exciting! enjoy