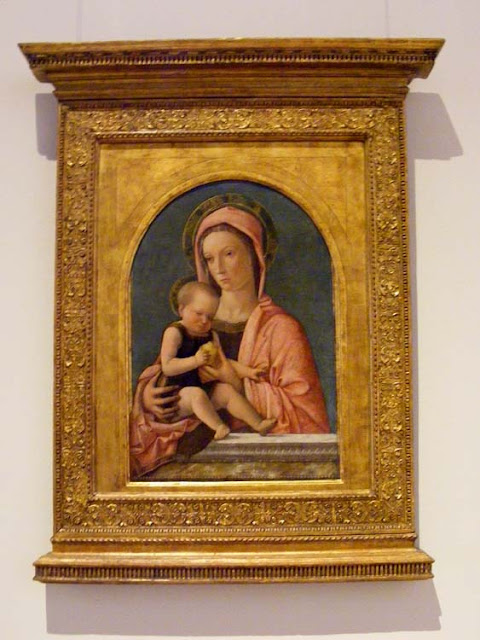 This charming Madonna and Child was painted by the Venetian painter Giovanni Bellini in the first half of the 1460s, in tempera on a wooden panel and hangs now in the Castello Sforzesco. It displays the typical peachy pink draperies for which he is famous, and for which the 20th century cocktail is named Bellini in his honor.

The infant Christ holds a pear, one of many symbols associated with Mary, and in this case indicating that the baby is the fruit of her womb. It is interesting that he chooses to clothe Mary in pink rather than the more traditional blue, thus allowing him to make the background greeny blue. I suspect this is in the interests of making the Madonna seem warm and soft, and clearly defined against the contrasting background.

The painting is from his earlier works, deeply religious but depicting very sympathetically human subjects. Later his works clearly show his association with his brother-in-law Mantegna, and he is one of the artists Albrecht Durer came to see in Italy. Durer rated him highly both as an artist and as a person, remarking on his generosity and kindness to visiting young and foreign artists. Titian was one of his students.

I think his most famous extant work would be his extraordinary portrait of the Doge Leonardo Loredan, hanging in the National Gallery in London, but many of his larger and major works in Italy were destroyed in the Second World War.

The Bellini, made of peach nectar and sparkling wine, first appeared at Harry's Bar in Venice between the Wars.
Every Monday our blog post features something from the northern Italian city of Milan. For more Mondays in Milan posts click here.

Our friends Colin and Elizabeth have decided to put their lovely house near Richelieu on the market. Colin has created a web page so you can find out all about it, from attic to cellar. He's included lots of photos and a floor plan. The house is modern, spacious, well appointed and surrounded by a lovely large garden. It is in a small friendly village not far from the larger centres of Chinon and Chatellerault which both have good shops, medical facilities and the like. The house would be ideal for someone who loves having their family and friends to stay or who has a large family still living with them. Asking price €275 000.

Our friends Tim and Todd have also put their London house up for sale. If you are interested in a sensitively restored large house with small but beautiful garden on the Mile End Road in an area that is very multicultural and you can rustle up couple of million pounds, check it out.

Tour de France: The race programme has been published. It is coming through the Loire Valley on Tuesday 5 July. We are planning to catch it at Saint Savin with friends.

Thanks for you link.

Corrrrrr! That London address is something else!!
It looks like it should be a mess with all that collection....but it really works!!
For me anyway....

That is a nicely done site, C&E....
Better than most estate agents I've worked with!!

The Harry's Bar Bellini doesn't use any old sparkling wine....it uses Prosecco!!
One of my favourite summer drinks!!
Prosecco is readily available at your local LIDL....who, totally by chance, as it was there before Prosecco appeared on their shelves....also do a very nice, rich peach nectar!!
Roll on Summer....
What do you mean...it is already here?