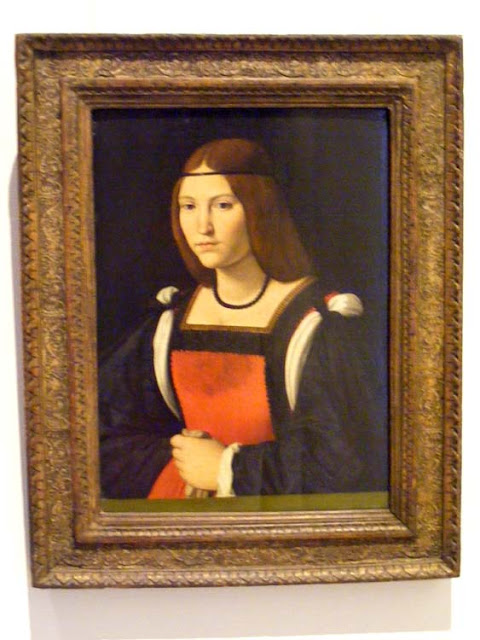 His two most well known paintings hang in the Louvre. The Madonna with the Green Cushion is a charming study of a breast-feeding mother and baby. It was discovered in the attic of the Cordeliers (Franciscan monastry) in Blois in the 17th century. Solario came to France to work for the lords of Amboise from 1507 to 1510 and it was probably painted during that period. But the subject of his other well known work, Charles d'Amboise, was appointed governor of Milan by Louis XII, so it may have been painted in Milan after Solario returned to Italy.

Solario came from a family of artists, although they were not painters. His brother was a sculptor and Andrea was the first in the family to take up painting. Like all of the painters in Milan at the time he was influenced by Leonardo da Vinci but his work also shows his familiarity with Flemish art. It seems likely that he took the opportunity to travel to Flanders from France before returning to Milan.
Posted by Susan at 09:00

You're right about Solario being influenced by da Vinci. This portrait is very reminiscent of La Belle Ferronière by LdV.

Bernardino di Conti also painted 3 portraits of Charles II d'Amboise, one of which is on display in Saint-Amand-Montrond museum. This painting is dated 1500. Di Conti is supposed to have known LdV, too. Did he befriend Solario?

The arguments about La Belle Ferronière are interesting -- as in who she was, what the title refers to and who painted the portrait.

Saint-Amand-Montrond is an intriguing town, with all its public art. I should try to get to the museum next time we are over that way. We have friends who live nearby.

I imagine Leonardo was unavoidable if you were an artist in Milan around 1500, and all the Milanese painters seem to have fallen under his spell -- at least, all the ones we regard highly today. Since I assume they all belonged to the artists guild I assume they all knew one another too.

Public art on roundabouts in Saint-Amand was meant to decorate the town but I do share your doubts as to the artistic quality of some pieces and the harmony of it all. As for the Saint Vic museum, it hosts a few remarkable pieces, among which a painting attributed to Van der Goes, a small one by Franken, and a lovely piece of furniture with drawers, Renaissance style, representing the story of Acteon. As for sculpture, the XVIth century Sainte Marguerite statue is worth the sight. And if you feel like seeing more sculptures, you can wander in the oldest part of the city, go past the library, towards the Carosserie Mesnier, (in which theatre venues are held) and you'll spot, if you look up, a Saint Jean Baptiste on his niche. Keep on walking for three more minutes, and you'll reach the church. Step in and look for an amazingly young-looking XVIth century Saint Roch statue. The dog is lost, but the saint stands with pride, showing off, on his right leg, a mark of the plague. Around Saint-Amand, l'Abbaye de Noirlac, up North, and Drevant Roman amphitheatre, southwards, are not to be missed. The restaurant in Drevant is great. Five more minutes down south is Ainay-le-Vieil, with a castle whose charms and heritage attract tourists, visitors and history-lovers. A festival on nature and the arts is held there this week-end.