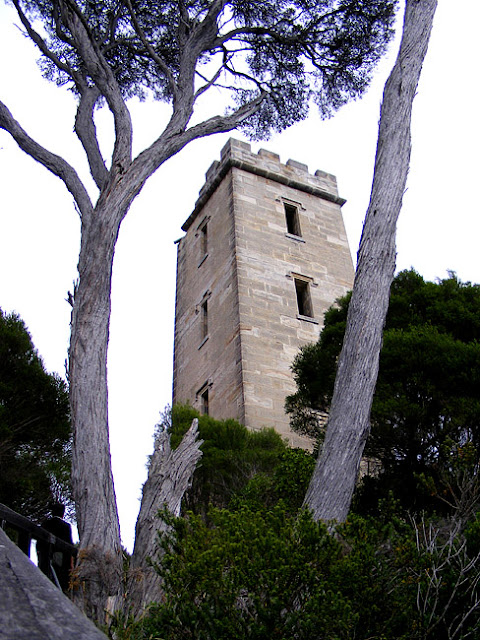 Boyds Tower, on the New South Wales coast, started as privately built lighthouse, but when permission was refused to operate it as such, it became a not terribly successful whale spotting platform.

It is one of the destinations on a short walk in Ben Boyd National Park. You can whale watch from the shore here (a much better ethical option than heading out in a deafening diesel engined boat). Whale watching season is June to November. The path to the tower is wheelchair accessible and a pleasant Melaleuca lined walk. The path continues via a boardwalk beyond the tower to a lookout point for views of Twofold Bay. The beach below is dangerous, with strong currents.

The tower was constructed by eccentric entrepreneur Benjamin Boyd from Sydney sandstone in 1847. It has been damaged by lightning strike, which dislodged one of the corners (see top left of the tower in the photo).  Boyd's name is carved into the top of the tower (see between the crenellations and the string course near the top of the tower).

Boyd was a Scottish stockbroker who floated the Royal Bank of Australia and engaged in various business activities in the young colony of Port Phillip Bay. At one time he was the largest landholder in Australia. His whaling operation had a fleet of nine ships. He came unstuck because fellow colonists became increasingly concerned about his use of indentured labour (essentially Pacific islander slaves that he brought from Vanuatu and New Caledonia).

if you didn't tell us this is Australia, I would think this tower is somewhere on the Côte d'Azur!

The Kanakas, the indentured slaves you mention were sometimes captured and brought to Australia against their will.

That's one of the main objections Boyd's fellow colonists had to his use of them.