Reflections on an Act of Terrorism

We have twice rented apartments in rue Amelot. That's a street that runs at the back of the Bataclan Theatre. It's also only a couple of streets from the former Charlie Hebdo offices which were attacked in January. Last time we were in the area was in early February this year, soon after the Charlie Hebdo attacks. We were very moved to see the great piles of flowers and messages at several sites in the streets, where people had left tokens of their support and sorrow at the events.


The Bataclan Theatre in February 2015. 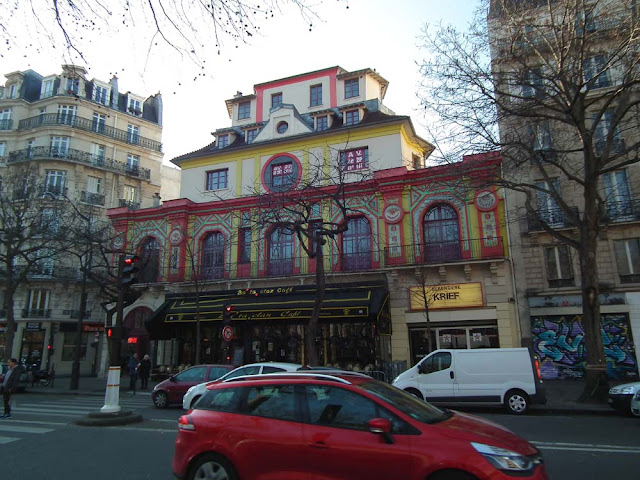 Now this area has once again been the ground on which the members of a cult have shown themselves for what they are. Killers, willing to die themselves and completely lacking in human understanding of community or freedom. I can't identify with these people at all. Their cause seems nihilistic, not sacred, and designed to concentrate power in the hands of a few megalomaniacs. The perpetrators of the violence come across as pawns, their victims randomly and tragically unlucky.


The Cirque d'hiver, which served as a first aid station in the early hours of 14 November. 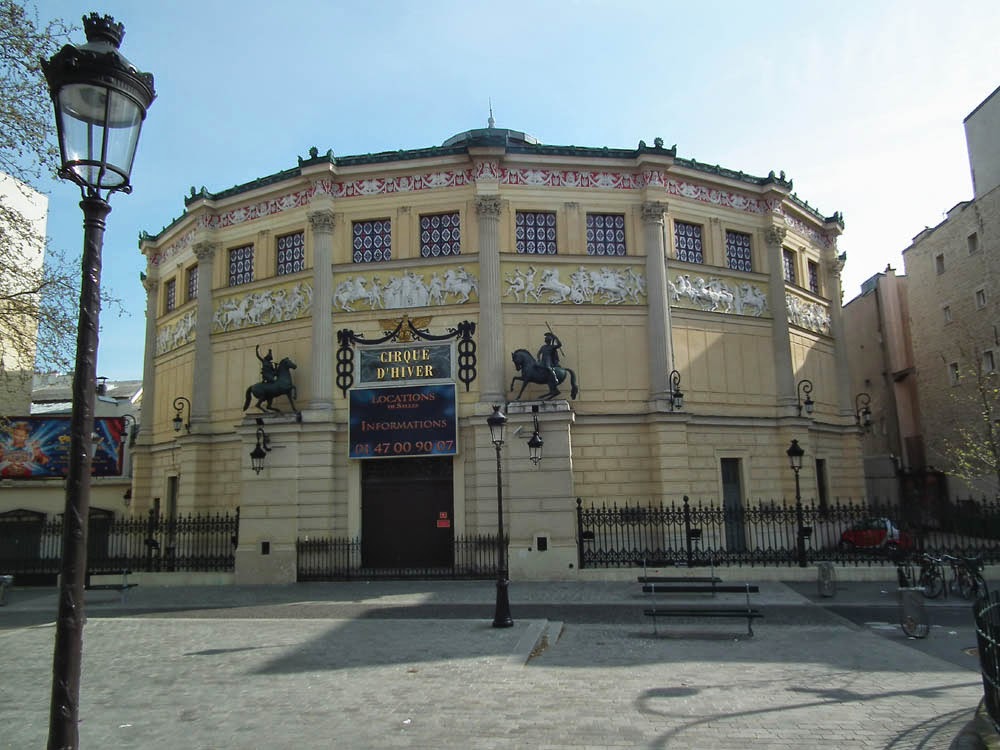 I suspect the terrorists are young, lack self esteem, are often intelligent but easily influenced by emotional arguments. They clearly see no real future for themselves and so are willing to die for a cause they have been carefully groomed to see as glorious. Once that grooming process is underway it is incredibly difficult to rehabilitate these people. All over the world we need to somehow let them know that they do not need to go down the route of extremism and that violent death is not glorious.


The monument in the Place de la République, which today sports a banner made by locals which says 'J'être humain'. 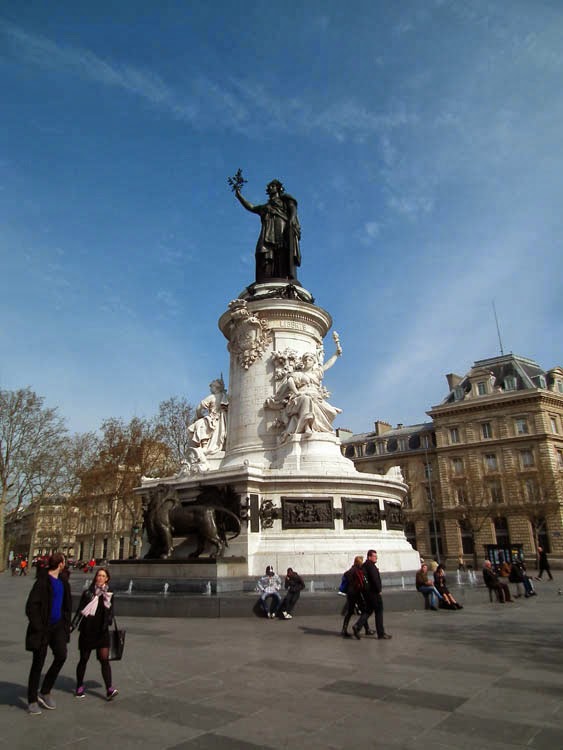 There is much criticism of organised religion, especially Islam, being bandied about, but I think we need to be careful not to throw the baby out with the bathwater. I am not attracted to organised religion myself, but those involved are not necessarily bad or stupid people. Often quite the opposite. I was relieved to see that many senior Muslim figures have unequivocally condemned the killings and disassociated themselves and their religion from the event. That has not always happened in the past when similar events have taken place.

Unfortunately the way of the moderate is not glamorous, not loud, not dramatic enough to hold the attention of some bored hot-blooded passionately politically minded youngsters. We need to be very careful to try to direct that passion positively, for good, and to demonstrate how much we value our young people and their ideas and energy. Above all we need to work to create situations where young people can be meaningfully involved in their communities and the wider world. The media, teachers and the authorities are particularly important for setting the tone, but we all need to support them (and let them know we are watching). It can be hard and seem pointless, but I don't know how else we end the violence.
********************************
A State of Emergency has been declared France wide. The prefecture has created a Crisis Unit and departmental security has been stepped up. Special temporary exhibitions have not been closed, but bags will be searched on entry and jackets must be removed. Police and security patrols have been increased around exhibitions, stations, shopping centres and places of worship. The public have been asked to avoid spontaneous gatherings in the street, apart from the officially sanctioned gathering to support the victims of the attack at 6.30 pm in Tours. Cultural venues and sporting facilities have been closed for the weekend, games and events cancelled. Some public libraries are closed.
Posted by Susan at 09:00

yes, to include all, nourish all, can only help those who give up hope.

I think the thing is not to let them lose hope in the first place, but we must not lose hope that something can be done.

Wonderful, well considered post, Susan...
The world seems to think that the young will go away and keep quiet...
if they have no visible future, they won't just go away...
the higher retirement is raised, the further away future prospects for the young seem...
technology is making the market shrink... so there are less jobs at the young end...
but technology allows the despondent and disaffected young to communicate.
That same technology allows a drip-feed of miss-guided information to reach the young who can see no future...
carefully crafted so that they think they can see a future...
we cannot remove that line of approach...
and "the powers that would be" know that and will use it!
All "the powers that are" can do is create hope, and a future, for the young...
from all races, creeds and calling...
disaffected people gravitate to the extremes...
they are already being pushed there by peoples' attitudes towards them...
we need, as a society, to remove that negative!
The young and disconnected need a future....
just how, in the current climate, we do that...
I have no idea...
save getting them all into some form of REAL employment...
in countries with a REAL future...
it cannot, in my mind, be done short term...
it will take a generation of altruistic governance...
it will mean that Unions and the like need to be less possessive of their perceived "right to stay in a job"!
It will mean that our expectancy of a pension will be reduced somewhat...
it will mean that people will end their employment early... and will need to be "given things to do"!!
No, it won't be easy....

Now, if only their enablers with their money are to be openly identified and eliminated, this will be a good step for humanity instead of another war where innocents are the victims and the vicious circle continues

As I understand it the money comes from oil and they are sitting on top of it.

The big thing is to maintain our faith in the young and try not to let them down.

Such a thoughtful and well balanced summary of what so many of us are thinking, Susan. Thank you for putting it into words.
xx

It's nice to know that it isn't just me who thinks this way.

I'm mystified by the expression J'être humain. It seems meaningless. Are you sure it wasn't just L'être humain? Thanks for these good thoughts that you have expressed eloquently. Still, so many people since the world began have died violent deaths in the name of God and organized religion...

Or was it Je suis humain, just like Je suis Charlie?

I thought it was odd too. It looks like J'être humain and is being reported as such (a reporter spoke to the women who made it, who said they weren't activists, just Parisians). Apparently it's a bad (ungrammatical) play on the Je suis Charlie meme.

Re the religion thing I think dogma is the problem rather than religion per se.

I just checked the banner and it definitely says "J'être"! Good intentions do not necessarily mean good understanding of the language and good grammar. LOL

My humble proposal: jobs. And I mean this in a global sense, everyone should have a job, in fact, must have a job. If there aren't any available in the private sector, then the public sector should provide one. Without a job, these young men have nothing productive to do, have no pride, have no future, and have no hope. Without the latter, they are easy targets for radicalization.

In general yes. But there are caveats. It should not be seen as a means of exploiting people - the contract between worker and boss should be fair. Public works schemes such as work for the dole are generally very badly managed make-work meaningless time and money wasters. Big public works schemes for real and sustainable development on the other hand should be encouraged (although a clear definition of what constitutes development as opposed to resource plundering or feathering developers nests etc needs to be on the table). Private/public partnerships usually don't work either. Better to have schemes which are clearly one or the other.

Quite agree on worthwhile public work schemes...if they are publicly funded and organised and offer real development to those taking part.
If our societies dump the disadvantaged young we shouldn't be surprised if this provides an opening for extremism to give them a value.

There is an argument for the re-introduction of national service (not necessarily military of course, but many public sector and non-profit employers could be set up to take young people for 6 months to two years as paid interns).

Well said, Susan, and thoughtful responses above. I think you have all combined to articulate what many are struggling to put into words.

Susan, I appreciate your comments. I knew we could count on you for a well-thought-out response to the horrible events.