The Spiritual Ancestors of Christ

The chapel at the Hospice Saint Roch in Issoudun has a pair of astonishing carved limestone 'family' trees set in the corners of the east wall and dating from around 1500. The one on the left is a Tree of Jesse, showing the line of kings leading to Jesus Christ, but the one on the right shows how he is descended spiritually from a line of prophets.

The kings featured are traditionally taken from the Gospel of Matthew. Above David is his son Solomon, then Rehoboam, Abijah, Asa, Jehoshaphat, Jehoram, Uzziah, Jotham, Jehoahaz, Hezekiah, Manasseh, Amon, Josiah, Jeconiah. However, the absence of distinctive signs and the disappearance of the names painted on their banners means we can't now name the Issoudun kings with certainty.

The Tree of Prophets. 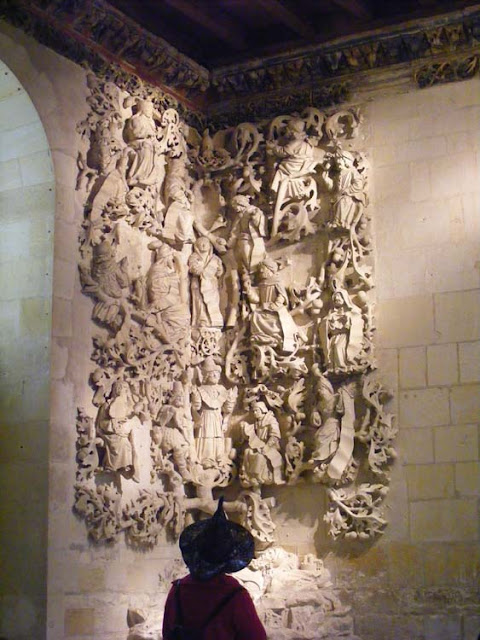 The terrestrial line, the issue of the tribe of the kings of Judah, supported by a fig tree, is complemented by the spiritual and religious line of Jesus. The great priests, patriarchs and prophets who announced his coming are arranged according to a symmetrical composition seated in the branches of an oak tree. Moses carries the tablets of the law. At his side, clothed in a fleece (perhaps Gideon) then in the centre Aaron at prayer, as befits the first high priest and older brother of Moses. Also there is Melchizedek the priest-king who blesses Abraham, lying there in place of Jesse. All denoting the signs of recognition of the messiah who is placed, bound, under the pelican, the symbol of sacrifice. The bulk of the tree crushes the monsters that are there to indicate to the pensionners and patients at the hospice that faith will triumph and good will be victorious over evil.

The virtuosity of the modelling of the prophets, and of the depth of undercutting of the leaves is attributed to the workshop of Gilbert Bertrand, who made other statuary in the chapel. 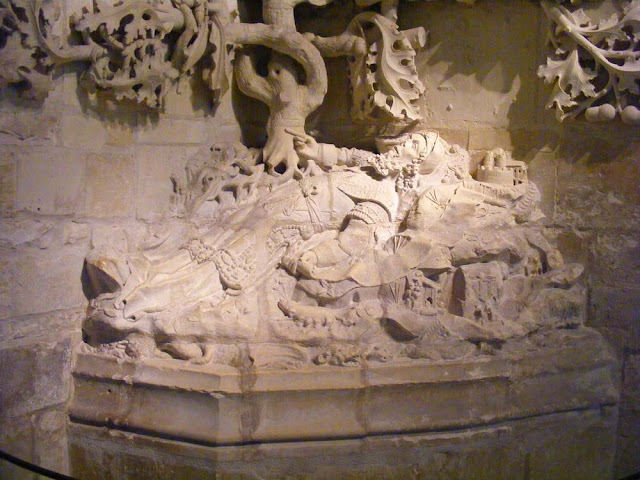 The decoration is a proliferation of foliage and plants, integrating human figures and animals. Originally it was painted, and the cornice frieze allows us to get a glimpse of the original effect. This chapel is remarkable because of the two 'family' trees, which are unique in France. These masterpieces are classed as a historic monument in their own right.

The stone decoration is both spiritual and realistic. The limestone is local, a stone which is soft at first, but hardens on exposure to the air. The blocks of stone were roughed out off site, then put in place and the fine detail added. The dull natural colour of the stone was enhanced with paint to really emphasis these beautiful details.


On this prophet you can just see faint traces of the original polychrome
paint work, as well as marks left by the tools used to carve the figure. 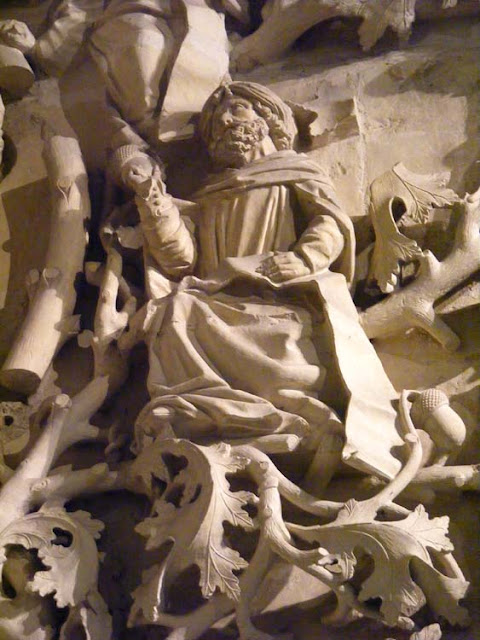 The striking effect of the sculptures comes about in part from the setting, but equally from the play of light and shade of the carved shapes and the contrast of flat surfaces against contours. The carving is very fine at the base and more acomplished in the oak tree than in the fig. The higher figures are less finely carved.


Aaron in the centre. 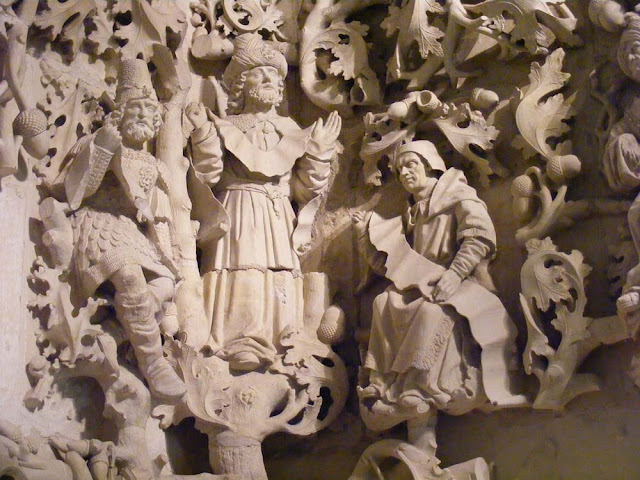 Moses is the first of the prophets and the most prestigious, placed at the bottom far left. He would live to be 120, lead the Israelites out of Egypt and teach the law. He is presented here as an old man, glowing with an inner light and with a dignity that is not observed in the other characters. Simply clothed, head and feet bare, he has two horns on his head which are the symbols of divine power. He carrys the tablets of the law and his name is inscribed on the hem of his robe.

The priest or prophet on the bottom far right is very refined in his clothing. He wears a necklace and an under tunic with pleated sleeves and fastened with a button. His cloak is trimmed with a jewel encrusted fringe. This priest wears a turban, signaling the 'orientalism' of these figures. The turban symbolises dignity and power. The higher the status the bigger the turban.

The figures of the prophets depicted in the oak show a great variety of costumes, accessories and hairstyles. The prophets wear robes and wide cloaks, with the exception of one, who is clothed in a short tunic and boots. In the 14th century it was headgear that distinguished the status of individuals.

From hoods to domed conical caps, felt hats to multiple forms of bonnets, whether long haired or cropped, all the heads are covered with the exception of Moses. More than the gestures or the lost names, it is the costumes that provide the symbols of the priesthood.
Posted by Susan at 09:00

I'm glad you've put up some more pictures of this wonderful pair of carvings...
the detail of the carving of the oak leaves is superb...
when one thinks of how many times in its long life it could have been destroyed...
it doesn't bear to think!!
Give me this of Mikkle-angelica's David any day... much more to look at...
I wonder how many sermons were delivered with the priest using these as his "prop"!?

Give me this over Mikkle-angelica's David any day... not of... always wish we could edit Splodger comments!

It is astonishing that they weren't damaged significantly in the Wars of Religion, especially when you consider that Issoudun had a wealthy and powerful Protestant population in the 16th C and the town was taken over briefly in 1562 by Protestant troops.

This is absolutely incredible!