The theme of the last Loire Valley Clandestine Cake Club meeting was 'fruit'. I thought about making a boiled fruit cake to a family recipe, but then I thought about the billion trillion apples on trays and in boxes in the pantry. The cake must have apple in it, and the more the better!

I chose a recipe from a little cook book which had been created as a fund-raiser for the primary school here. The recipes were submitted by the kids and were all simple dishes that they could make themselves. The last couple of Cake Club meetings have been dominated by outrageous confections and bountiful buttercream. It was all a bit icky and I thought something simple and undecorated would be a nice change. As it turned out, I wasn't the only one and only one of the cakes presented on the day was iced.


Gâteau Titou aux pommes on the table with the other Cake Club offerings. 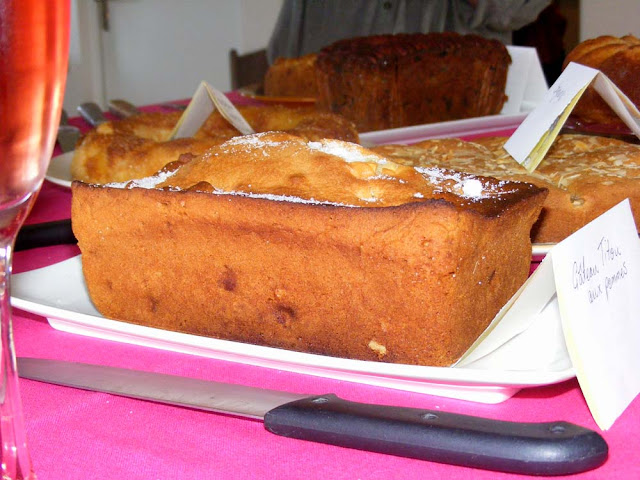 I wondered who the Titou in the cake's title was so I looked him up. He turns out to be a small boy in a children's book which in French is called Titou fait un gâteau ('Thomas Bakes a Cake'). It's an illustrated book for parents to read to little kids and uses nice everyday language. It features Titou baking a cake with his father, in a comfortable rural family home. It is also notable for openly depicting breast-feeding and nudity. Titou is a diminutive of Antoine. The author, Gunilla Wolde, is Swedish and Titou was originally Totte. The book does indeed contain a recipe, and the author encourages fathers to make it with their children. Wolde died earlier this year.

The recipe in the fund-raiser book is a bit different to the one in the story book, and is typically French ie not well written compared to modern English language recipes. Some of the instructions are vague ('un peu de levure') and the steps not well thought out in terms of their logical order (you are not told to peel and chop the apples until just before they need to go into the mixture, for example). I've translated and improved the instructions below.

My cake cut so you can see the inside. 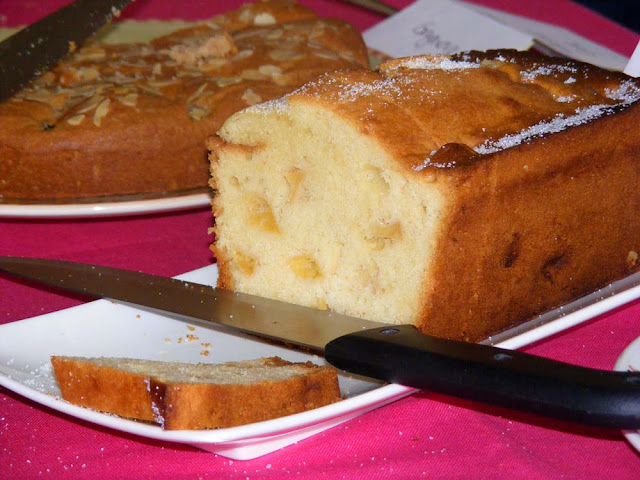 After about half an hour of cooking my cake had crisp edges and a madeira cake style crack down the centre. A lava like flow of batter erupted from the crack and I'm not sure what caused that. It didn't really spoil the appearance of the cake and it was properly cooked all the way through when I took it out of the oven. The apple stays suspended in the mixture very well.

It looks delicious and I wish I could have been there to taste it.
As you say, all the fancy icing can be a bit sickly and a plain cake is often just the job. I look forward to trying the recipe.

I'm with you on the buttercream, although Jane's topping ( a mix of buttercream and sugarless custard) was delicious.

Your cake was delicious on the day, and the piece we took away was just as good a couple of days later. I've book marked the recipe.

Pauline has been told to eat more... especially things like cakes....
we have apples that won't keep too long... to warm and dry...
We'll let you know when it is ready!!