The Hôtel de Ville (Town Hall) in Loches dates from 1543 and is built of limestone.

In 1519 the King François I gave the authorisation by letters patent to the town councillors of Loches to construct their town hall. The work was delayed due to financial issues and because five proprietors, having lodgings on the site, had to be removed. Directed by the master mason Jean Baudoin the work dragged out between 1535 and 1543.


The Hôtel de Ville is the L-shaped building on the left, with the French flags flying. 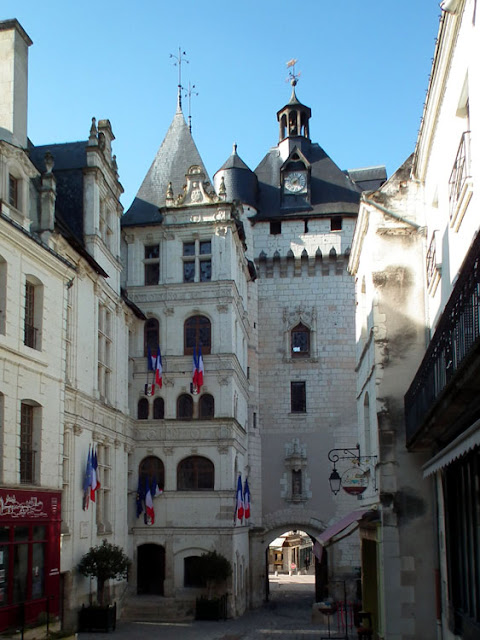 The master mason was confronted by two principal technical problems. First, the plot envisaged, whilst long, did not allow the town hall to be constructed with the gable on the street, the King having forbidden the demolition of the Porte Picois (Picois Gate) next door. Jean Baudoin therefore constructed two ranges parallel to the street. Second, the interior space wasn't big enough to construct a straight ramp staircase. The master mason in the end built a square tower backing on to the Porte Picois, to serve as the stairwell.

The decoration is sober, comprising two levels of double transverse mullioned windows bordered by voluted capitals, the heads of lions and putti. The spandrels of the first floor are delimited by a frieze of circles and lozenges. At the summit a dormer window is ornamented with the salamander, the symbol of François I.

The building has retained its function as the town hall since the date of construction, which is exceptional.