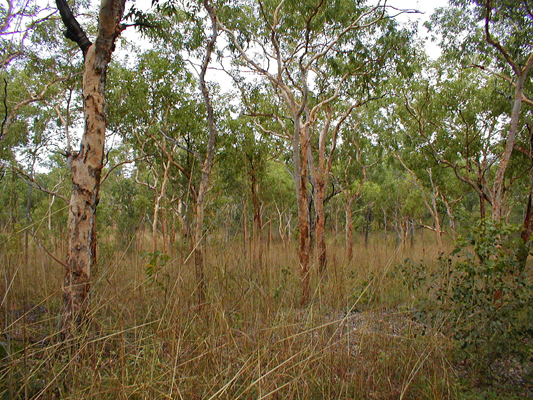 Tropical savanna is a grassland habitat that is combined with open woodland. To technically qualify as such the trees have to be spaced far enough apart that they do not form a continuous canopy. Tropical savanna is warm and light, allowing a dense covering of grass under the trees. Understorey plants do not suffer from being shaded out as they would in tropical rainforest. The other characteristic that is required for tropical savanna is highly seasonal rainfall, with the majority of the annual rainfall arriving in a single season.

Tropical savanna also frequently forms an intermediary habitat between desert and true forest. Typically, native people around the world manage tropical savanna by fire, and that is true of the area shown here, in the Northern Territory of Australia. As much as any other influence on these environments, man has had a hand in shaping them. In the case of the Australian tropical savanna, it has been a managed environment for tens of thousands of years.  Traditional burning created a mosaic of micro-habitats which increased biodiversity. The burning prevents the understorey scrubbing over and eventually turning into forest, and provides fresh grazing for prey animals such as macropods (kangaroos and wallabies).

Australia's tropical savanna is the least known of the major geographical regions where this type of habitat occurs. Much more famous are Brazil's Cerrado and Africa's Serengeti.

***************************************************
A la cuisine hier: Since I made Chocolate Chestnut Souffle Cake a few days ago I had 16 egg yolks sitting in the fridge. In my usual spirit of anti food wastage I used them up by making custard, vanilla icecream and mayonnaise. All was going well until I got to the mayonnaise. In the process of whisking the oil into the egg yolks with my new hand held plunge whisk and goblet it all got out of control and I sprayed mayo over myself and the surrounding kitchen. That's the second time I've done it using this new ensemble, so it is not getting a third chance. The goblet is too lightweight and is impossible to stabilise (unless you have three hands). I narrowly avoided getting mayo in the custard, which would have made me even madder.

For dinner we had palets savoyards, which I had never heard of before but picked up on special at the supermarket. They are a pork patty with a slice of reblochon cheese on top and wrapped in bacon. There were no instructions for how to cook them so I baked them in the mini oven on quite a hot temperature, with a little stock in the dish. That way the bacon and cheese on the top browned and the bacon underneath and the patty braised. Served with mashed potatoes, steamed broccoli and wavy cut carrots.
Posted by Susan at 09:00

"Served with mashed potatoes, steamed broccoli and wavy cut carrots"....
but... were the palets nice?
And were you using the wizzy-stick blade head for the mayo...
or have you got one with a whisk attachment and were using that?
I ask, because the blade head pulls everything to the bottom of the container...
whereas the whisk behaves like a weapon of war at high-speed!!
It only seems to be happy with thick whisking...
for egg whites I use it very slow until there is a level of thickness in the meringue foam...
then press the turbo button...
I'd never used the whisk for mayo... not in the beaker that came with our wizzy-stick...
in fact the beaker hardly ever gets used!

More importantly, what did you make to end up with 16 egg yolks? The meal sounds delicious. We've had something similar in the Haute Savoie.

My party piece is to spray the kitchen with soup... :o(

"My party piece is to spray the kitchen with soup..."
My Mum got round that problem...
she painted the kitchen walls and ceiling with special wipe-clean bathroom and kitchen paint...
she also chose Fox Brown as the colour...
which meant that some soups weren't visible anyway!!

In this tropical savanna, are there different species of trees or is it mostly eucalyptus?

So palets savoyards are a thing, not just something the supermarket was pushing ?!

I had made Chocolate Chestnut Soufflés a few days earlier.

The palets were nice. Not outstanding, but I never expected them to be. Simon licked his plate clean. I thought they were rather salty, but they made a good easy to prep meal.

It is rather odd...
every time I look at that picture...
I see your orchard!!

Do you know, I had a rather similar thought yesterday! The orchard definitely operates like an open woodland. I was photographing a Grisette Amanita vaginata, which is a species of open scruffy woodland, and I get them regularly in the orchard.