This unique and handsome bronze griffon was discovered in 1974, isolated from any archaeological context when work to install the town sewage system in Issoudun was undertaken. It is probably 13th century. It is now part of the collection in the Musée de l'Hospice Saint Roch in Issoudun.

The animal, half eagle, half lion stands solidly on all four feet. Alert, head up and looking forward, it holds a small ball in its beak. Its short tail terminates in a flat round ended tuft with two volutes either side. This type of stylised finial can be frequently observed on medieval sculptures or enamels. 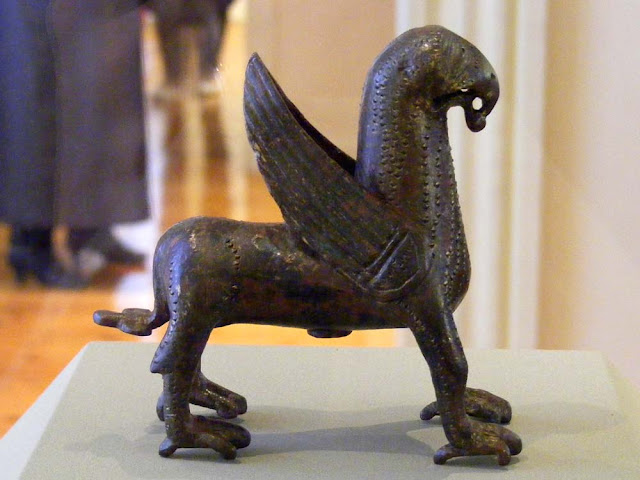 The animal must have been part of a more complex object, as evidenced by the threaded point hidden behind the back swept wings. It is probably part of a candelabra.  It's either the support for the candle holder or a decorative grip mounted on the other end of the candle holder. There are some similar objects in the Cluny and the Louvre which came from workshops in eastern France and Lower Saxony.

Found throughout the ancient East this fantastical animal was a guardian of treasures for the Greeks, symbolising eternal life, but more often a demon in the Roman and Medieval Christian world.

************************************************
A Paris hier: As you will all know by now terrorists attacked multiple locations in Paris last night and killed well over a hundred innocent people in bars, the theatre and the street. It happened after I had gone to bed, but Simon woke me to tell me what was unfolding, so I would not be too shocked when I got up this morning and saw it on the news. The president has declared a state of emergency and border controls are being stiffened. Schools, museums, swimming pools and markets are closed. The Republique and Bastille area where the attacks mainly took place are familiar to us (Simon tells me we have a photo of the Bataclan theatre). The last couple of years this is the area we have taken to staying when we go to Paris.  It's also the area where the Charlie Hebdo killings took place. It's so difficult to deal with attacks like this. The killers have no respect for their victims and feed off the fear they create in the community. Mostly at the moment I just feel numb and bewildered at how anyone could justify randomly killing people in this way. We must find some common ground and work to bring it to the fore.
Posted by Susan at 09:00

Once again, extremism driven by whatever religion is evil, to use one of their favorite words! This carnage leads nowhere, just to the death of innocent people, among whom there may have been some of their coreligionists. So long as we don't strike at the top, this will be repeated again and again. I am really angry. Organized religion is evil.

You can say that again.

Very sad, and horrifying. At the end of a day of continuous broadcasting of the dreadful news from Paris on our public broadcaster, the anchor advised that viewers might be better to turn off the television and go for a walk, rather than sit riveted. Kindly sensible advice.

I've deliberately not watched any of the television footage or reporting.