This gilded copper and champlevé enamelled crozier dates from around 1200. It was found in the tomb of an abbot at the Abbey of Notre-Dame, Issoudun in 1853. It is now displayed in the former hospital ward of the Hospice Saint Roch, now a museum. The cover of the tomb it came from can also be viewed in this room.

According to a study of 13th century Limousin croziers the Issoudun crozier belongs to a group of thirty-four examples distributed all over Europe. They are distinguished by the same central motif of large stylised flowers in the volute. The closest in appearance are those from Angers, Carcassonne and Carpentras. Dated to the end of the 12th century they precede croziers with animal motifs and historic scenes. 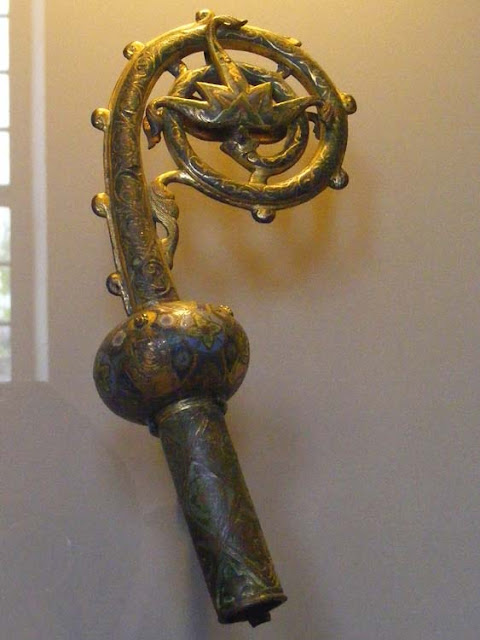 The decoration is done using the champlevé technique. Coloured enamel is put in small depressions which are etched out of the copper. The cylindrical socket, decorated with fantastical birds in lozenges, would have taken a shaft of wood. Above, the node shows the busts of the evangelists, their heads slightly raised from the background level, in four oval medallions. Around this part a piece of cloth would have been attached, to protect the copper from the acidity on the palm of the hand.

The shape of the crozier, with a wooden shaft terminated by a flowery volute is inspired by the legend of Aaron's rod, recounted in the Book of Numbers, where the priests are identified by the miracle of the rod bursting into flower. Aaron's rod has another legend attached to it, whereby it became a serpent, which would account for the undulating shaft shown on the tomb, and the reptile head of the volute.