An Evening at le Jean Bart 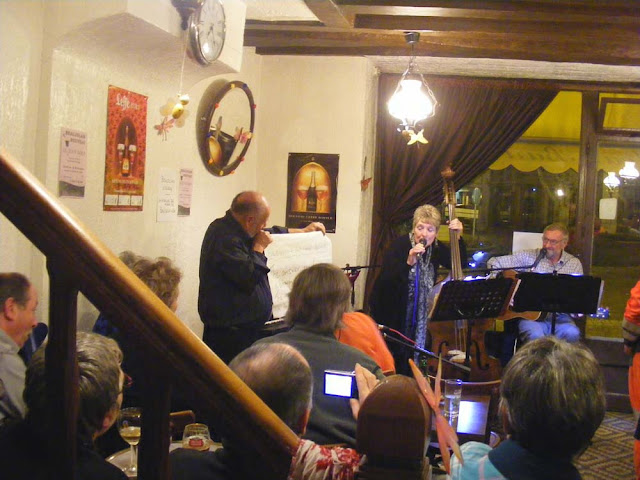 Le Jean Bart is a bar in le Grand Pressigny. A week ago we attended a Beaujolais nouveau event there. Normally we wouldn't bother with such a thing but our friend Pauline had alerted us to the fact that she would be singing, so we went along to show support.

The wine turned out to be very drinkable. Frankly we were amazed, because Beaujolais nouveau is usually frightful rotgut and nothing more than an advertising wheeze. The long hot summer has obviously had an effect on even the youngest wine.

The atmosphere at le Jean Bart was intimate, relaxed and friendly. There was about an even split between French and Anglos. Most people knew one another (not difficult in a small room in a small village).The audience was encouraged to sing along and a member of the audience roped in to hold up a lyrics sheet. Some of the songs were in English (Blowin' in the Wind) some in French (Les Champs Elysées). The musicians were a mixture too. Even the dog joined in. 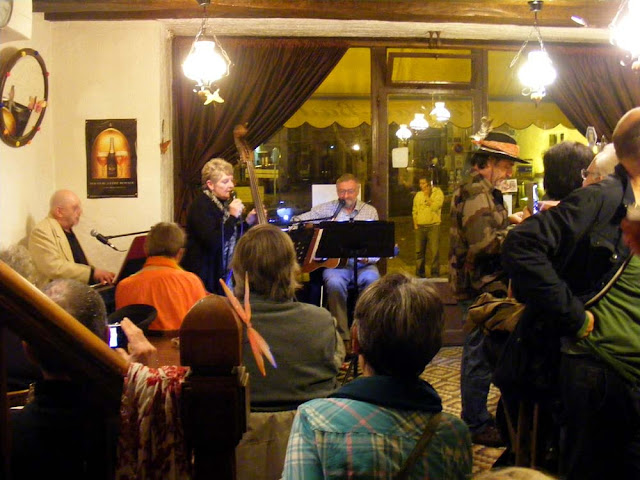 And I think, probably, the "gut rot" was especially saved for export to Anglais Land!

Love your description of the Nouveau: "frightful rotgut and nothing more than an advertising wheeze."

We're sorry to have missed it, suffering from extreme painting fatigue on the day.

These days just thinking about painting gives me extreme fatigue. Having had Bruno paint our kitchen I would always opt for that approach now.

I was even called upono to perform a solo on the spoons! Quite unexpected. Where I go my spoons go. Quite what the security guard at Lidl in Chatellerault who checked my bag on the way into the store made of them I don't know. P.

We clearly left too soon!