The 19th century Arco della Pace today marks one of the ancient gateways into Milan. The current arch was started by Napoleon in 1807 and the road it adorns connects Milan to Paris across the Alps. The arch was not finished until 1838, and was ultimately dedicated to the 1815 peace congress held in Vienna to sort out Europe after the defeat of Napoleon. It is linked to the Castello Sforzesco by the Simplon Park, which is landscaped to create panoramic views of both landmarks.

The arch is neo-classical, decorated in low relief scuplture in a variety of materials (marble, wood, bronze, stucco). The statuary refers to historical and mythological events as well as allegories representing the four major rivers of the area. Many artists worked on the edifice.  The 25 metre high triumphal arch is topped by bronzes depicting Minerva (Goddess of War) in a six horse Chariot of Peace and four outriders known as the Victories on Horseback. Or something -- the various interpretations I found of the iconography don't make much sense to me. Perhaps they reflect the rather confused origins of this victory turned peace monument. Originally the bronze equestrian group faced Paris, but they were turned around to face the city of Milan. 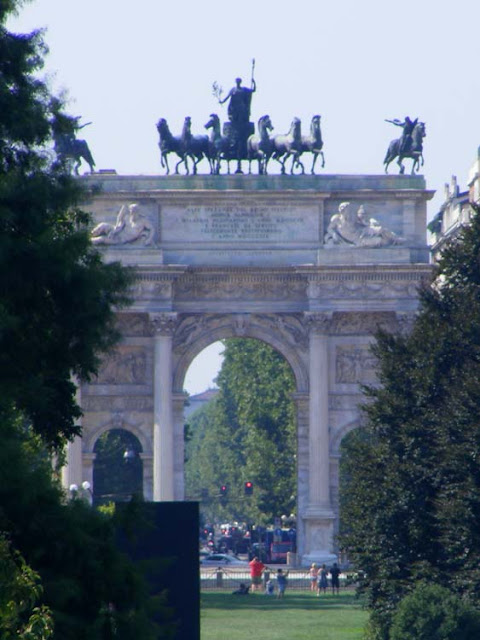