Loches is and was a town with a small population, but important despite its small size. It was (and is) a centre for tax collection, and situated on a major national crossroad.  In the 16th century, when the Manoir de Sansac was constructed, the population of Loches was about 3000 inhabitants. Today it is around 7000 inhabitants.

The Manoir de Sansac stands in rue du Docteur Martinais in Loches. It was built of tuffeau (limestone) in 1529 for Louis Prévost de Sansac, Grand Falconer of France and loyal personal friend of François I. He participated with distinction at the Battle of Pavia in 1525, and was taken prisoner by the Spanish alongside his monarch.


The glazed terracotta portrait of François I above the front door. 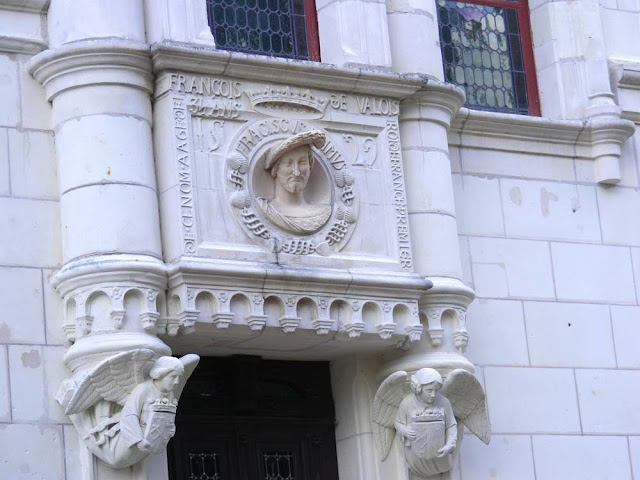 Sansac is hidden from the road and only open to the public a few days of the year. Even then it's just access to the grounds. Simon spotted that there would be a free guided tour in early September, so Niall, Antoinette and I turned up at the appointed hour. We were quite surprised by the size of the crowd that had already gathered. A guide from the heritage department spoke about the history of the house and Loches at the time of Charles V, the Holy Roman Emperor's stopover here, when he met François I and they travelled together to Paris. Tradition has it that it was at Sansac that Charles and François met on the night of 12 December 1539, although they seem to have slept at the chateau.

In 1539 Charles V, the Holy Roman Emperor, needed to get to Ghent in a hurry. He was based in Madrid, so despite the fact that he and François I had issues (over Pavia, Milan, Burgundy...) Charles applied to François to travel through France as the quickest way of getting to his troublesome territories in the Low Countries. François, unwell and unable to ride, grudgingly agreed. He travelled down as far as Loches to meet Charles. The locals were told to put on a spectacular to impress the Pope's appointed defender of the Catholic faith and they set up a fabulous pyrotechnical display of burning effigies of phoenixes and salamanders (the emblems of the two kings). The citizens of Loches were well rewarded financially for their efforts, receiving 400 livres. On the other hand, François and Charles did not exchange gifts and there was no banquet, due to the personal coolness between the two men.


The Manoir de Sansac photographed from inside the grounds, situated on one of the channels of the Indre River between Loches and Beaulieu-lès-Loches. 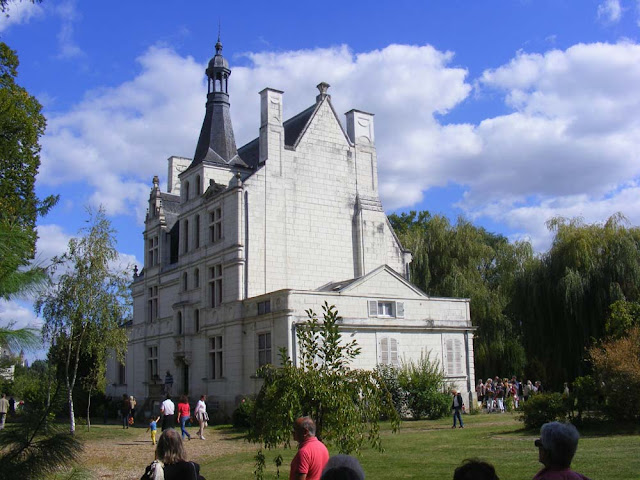 The manor building originally comprised just a single range between two gables set at either side of a rectangular footprint. It was then enlarged by the addition of two short wings. The facade is broken by six mullioned windows surrounded by pilasters with capitals ornamented in volutes, cornucopia and the heads of angels. A twin curved staircase gives access to the front door, over which is the head of François I and an inscription which reads 'François de Valois, roi de France, premier de ce nom, âgé de trent-quatre ans'. The original medallion in glazed terracotta is reputed to be the best likeness anywhere of the king. It was probably made by the workshop of the potter Girolamo della Robbia. The one you can see today on the house is a copy. The original was sold and sent to the United States in the early 20th century. It was gifted in 1941 by George Blumenthal to the Metropolitan Museum of Art in New York. He was described by the guide who led the visit as 'un grand collectionneur américain'.

The house was listed as a historic monument in 1927 and is currently privately owned.  I gather it was the current owner who had the copy of the terracotta portrait of François made, in 1991. The copy is not entirely true to the original, as it was made from a drawing rather than the real thing. The crown is not there on the original and there are some errors in the inscription. Nevertheless the copy is considered rather good. The original can be seen next autumn, on loan to the National Museum of the Renaissance in the Chateau of Ecouan. The Chateau of Fontainebleau also has a copy, made from a mould of the original.


Central internal staircase tower.
The design is similar to the Chateau of Azay-le-Rideau. 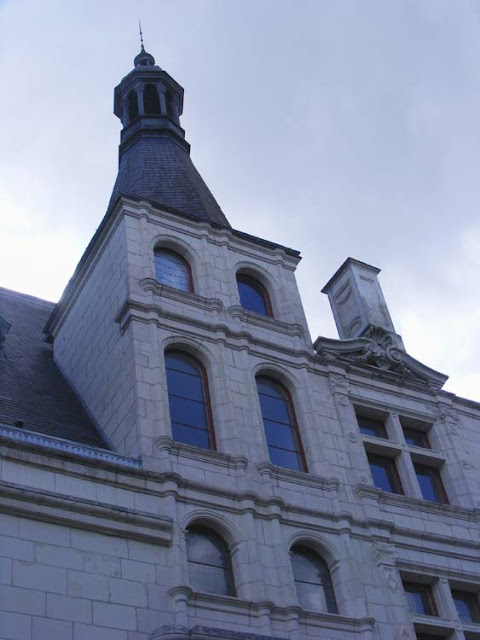 An engraving from 1841 shows there were no angels either side of the front door like there are today. They hold shields with the Bridieu family arms on the right side and the Luzarche family arms on the left. The Luzarche family are connected to the nearby Chateau of Azay-le-Ferron and presumably married into the Bridieu family. The Bridieu family were the 20th century owners prior to the current owners. They installed the stained glass, which came from the well known workshop of Loubin in Tours. The intitials LB in the window by the entrance stand for Louis Bridieu.


Mullioned windows with leaded lights are not original,
but the frieze with blank rondels is. 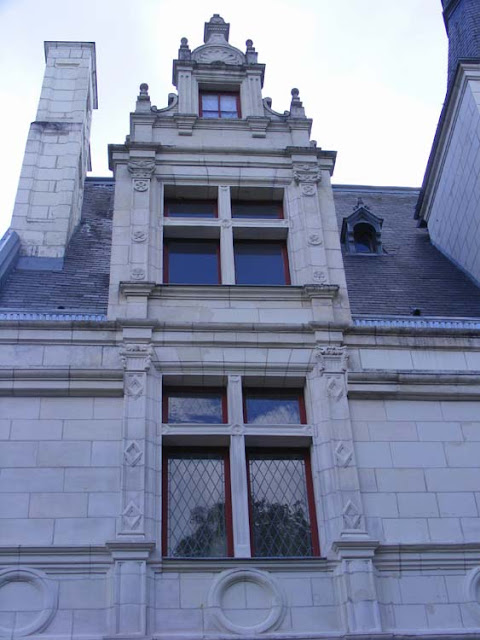 Also in the 1841 engraving there are no mullions in the windows. Were they replaced or has the house been 'enhanced' and romanticised? Service stairs have been added at the back but there were 19th century alterations too and it is not clear from existing drawings of the place exactly what work the Bridieu's undertook and what is earlier. Whoever is responsible we are left with an overlay of typical 19th century style pastiche on a genuine early Renaissance building that stylistically was a crossover between the late medieval (asymetric facade) and the renaissance (straight ramp on ramp internal staircase).