This late 12th century effigy is carved from limestone and came from a tomb in the crypt of the Abbey of Notre-Dame in Issoudun. It was discovered in 1853 when the building was demolished to make way for the courthouse (palais de justice). It is now housed in the former hospital ward of the Hospice Saint Roch, which is now a wonderful museum.

The very high quality carved slab rested on an arcaded support under an arch of a chapel. According to records of the find the tomb contained a skeleton dressed in silk and linen, which disintegrated when the tomb was opened. 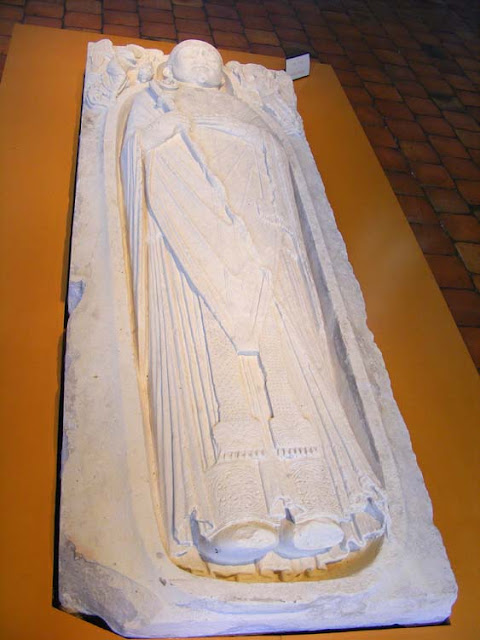 The cover of the tomb has a representation of the deceased, shod in sandals, bare headed, tonsured. He holds and wears the insignia for his office. His chasuble is studded with jewels, he has a stole around his neck, a maniple on his left arm and holds a crozier in his right hand. This last is formed by an undulating shaft finishing in a smooth node topped by a volute with the head of a reptile. It is an external realisation of the enamelled crozier discovered within the tomb.

The abbot is depicted at the moment of his resurrection, with an angel on each side of the coffin swinging their censors to accompany the ascension of the soul of the deceased towards heaven. His left hand is placed on his chest in a sign of acceptance.

According to a recent scholarly examination this masterpiece of the end of the 12th century could be attributed to a workshop in Sens, which worked on effigies at Nesle-la-Reposte and then at Chartres.
Posted by Susan at 09:00