I Exist! and I have the Carte Vitale to prove it

When we moved to France in 2009 we were able to do so fairly easily because we are citizens of a fellow EU country (Britain) and thus are able to live and work in any EU country automatically. One of the things we did fairly quickly on arrival in France was to register as autoentrepreneurs. This business/tax category is for small scale self employed people, who either wish to stay small scale because they are part time or because they are testing a business idea and want to stay simple tax wise and inexpensive accounting wise. The reason we chose to do this was twofold. First, we genuinely did want to set up a business. The second was because it was the single simplest thing we could do to establish our eligibility for a Carte Vitale (French state healthcare card), giving us automatic and easy access to the excellent French state health care system.

As independent professionals (professions libérales) we were automatically affiliated to the social security administrators Régime Social des Indépendents (RSI). They work closely with an insurance company Réunion des Assureurs Maladie (RAM) and to be honest, I've never worked out quite where the division of labour is. We pay our social contributions to RSI, but it is RAM who reimburse us when we have a medical expense. RSI administers eligibility for the Carte Vitale and issues it. Or something...You've also got URSSAF and CPAM, and RSI and RAM are divisions of them. Or something...


A sample Carte Vitale, courtesy of Wikipedia and Creative Commons. 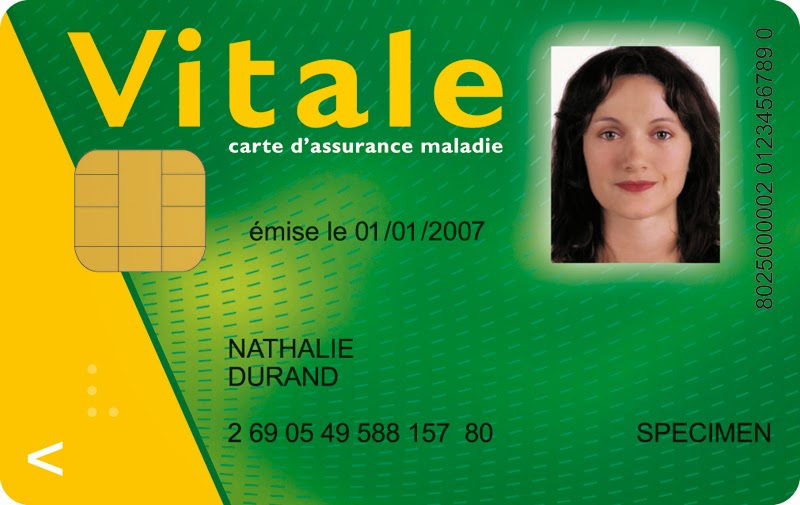 We sent off our applications and copies of our identity documents.  They gave us temporary social security numbers and promptly asked for translations of our identity documents, which they are not supposed to do if dealing with citizens of an EU country who are born in an EU country, as Simon is. We didn't know this at the time and duly got translations of everything. These were sent off and eventually -- months later -- Simon suddenly received a form asking him to supply a passport style photo so they could issue his Carte Vitale. After another wait -- RSI take a remarkably long time to process documents always (think months...) -- his card arrived in the post. This meant that for visits to the doctor or dentist his card was put in the reader and our reimbursement of the fee turned up automatically in our bank account a few days later. The percentage of the point of use fee that is reimbursed varies depending on what the doctor charges and what the standard fee is. For an ordinary GP visit we pay the doctor €23 and are reimbursed €14 for example. For Simon's recent dental crown we were charged €280 for the final fitting of the crown and reimbursed €73.

Simon was clearly sorted, but there was no sign of a card for me. I emailed RSI. They said it was something RAM had to deal with. I emailed RAM. They said it was something RSI had to deal with, but not to worry -- in the meantime I could still claim my reimbursements by posting them a feuille de soin (care form) each time I paid a health care bill. Fine. That worked perfectly well and so I didn't pursue the matter.

Then I discovered, quite by accident, that anyone born outside the EU must have their birth certificate translated and apostilled (whatever that was...) I waited with interest to see how long it would take for RSI or RAM or whoever to inform me officially that I needed to do this. There was no incentive for me to take action because a) I was being reimbursed, and b) obtaining a birth certificate with apostille and official translation would be expensive.

Finally, in February 2014, a letter arrived telling me that INSEE (the national office for statistics) required that I do the apostille thing. Frustratingly I was in Australia at the time and the letter sat in France unopened until I got back. That meant I had to arrange the documents from afar. After getting in touch with RSI and the Australian Consulate to try to find out exactly what was required and how I went about aquiring it I went through the same process with the Registry of Births, Deaths and Marriages in the Australian State of Victoria and the Passport Division of the Department of Foreign Affairs in Melbourne, the capital of that State. RSI told me I had to get in touch with my embassy. The Consulate told me I needed to get in touch with Foreign Affairs. After a couple of email exchanges, each time getting a little more information but never enough for me to be absolutely clear about what I had to do or what the process was I emailed the last person who had emailed me from Foreign Affairs and expressed my frustration about how nobody seemed to know what the procedure was and that I wasn't willing to wing it because every step of the way costs money. That at last got me a sensible and helpful email from someone who did know what the procedure was.

I ordered my birth certificate online from the Registry Office of Victoria and paid the fee with my bank card. Victoria is the state I was born in and birth records are administered by the States in Australia. I already had a copy of my birth certificate, but that wouldn't do for INSEE/RSI as it was issued in 1988. They wanted one that was less than 3 months old. Then I downloaded a form requesting that my birth certificate be apostilled by the Passport Office in the same state, again paying the fee with my bank card. An apostille, I had discovered by now, is a sort of belts and braces stamp of authentication for documents of identity. You can't trust those foreign Johnnies, you know.

In order for the Registry Office to actually issue my birth certificate I had to prove my identity and send them copies (not originals) of 3 documents which showed my name, current address and date of birth, in English (or with translations if in French). The one to show current address was a bank statement from my UK bank. I had to request it specially, as the bank normally issues electronic statements, but it did save me the time and cost of a translation of, for example, a French bank statement. These documents had to be certified as true copies by either a public notary or a policeman, who had to stamp the copies with their official stamp and sign them. I made an appointment with the local notaire who happily made copies and stamped them. To my dismay, her offical stamp just says 'notaire', not 'notaire public'. My instructions stated that the stamp had to say 'notary public'. What to do!? In the end she laboriously hand wrote a long phrase on each copy stating that she was the state appointed notary and noted the relevant law reference. Fortunately the Registry Office were happy with that. To her credit she didn't charge me for her services (and was the only one in the whole process who didn't charge a fee).

I posted the documents off to the Registry Office with a covering letter asking them to forward the birth certificate to the Passport Office for the apostille. It took them about a month to issue the birth certificate and when they did I got an email from them asking where the form requesting the apostille was. I replied that I had sent it directly to the Passport Office. No one had told me that normally people send the apostille request form to the Registry Office along with the other documents and they then forward the whole lot to the Passport Office. Government departments that talk to one another -- wow! It had never occurred to me that one government agency would want to receive a form which had nothing to do with them and was to be processed by a different government agency.

After another few weeks wait the birth certificate with its big red raised apostille stamp on the back arrived in the post from the Passport Office. Now I had to get the birth certificate and apostille translated by an officially certified translator (Fr. traducteur assermenté). I basically chose one at random from the official translators website.

She turned out to be efficient and easy to deal with. I explained what I needed by email, she quoted me a price, I paid her €70 via PayPal, sent her scans of the birth certificate and she did the translation within a couple of days and sent it back to me both electronically and in the post.

Finally, I sent off the documents RSI had requested all those months ago. The pre-addressed return envelope they had helpfully provided was way too small so I used one of my own. After another month or so, my original documents came back in the post, with a chirpily worded post-it note attached saying 'Bonjour, here are your documents' and nothing more. No indication of whether they were acceptable or if I would be receiving a Carte Vitale any time soon. I waited another month. A letter arrived from RSI asking for a passport style photo and a copy of a piece of photo identification within 15 days. Wooohooo! That must mean they are going to issue a card! Interestingly, this was the only letter I received from them that was dated or included any sort of deadline. Form letters from French government agencies are often not dated.

Off I went to the photo booth at the supermarket and got the necessary photo then posted it and the requested identification to RSI (to a different address to where I had posted the birth certificate, by the way). At last, on the Monday after Christmas 2014, an envelope arrived from RSI and I could feel it had the coveted card in it!!

I've been paying my social contributions and taxes for nearly 5 years and it has taken all that time to get a Carte Vitale. I don't think it's a record though. A French friend who came back to France after living in Canada for a while, said it took her just as long to winkle a card out of the authorities. The Carte Vitale was introduced while she was in Canada, so although a French citizen she had never had a Carte Vitale when she arrived back. She said it was as though the authorities had never heard of such a thing, just didn't believe her and had no idea how to deal with her situation.