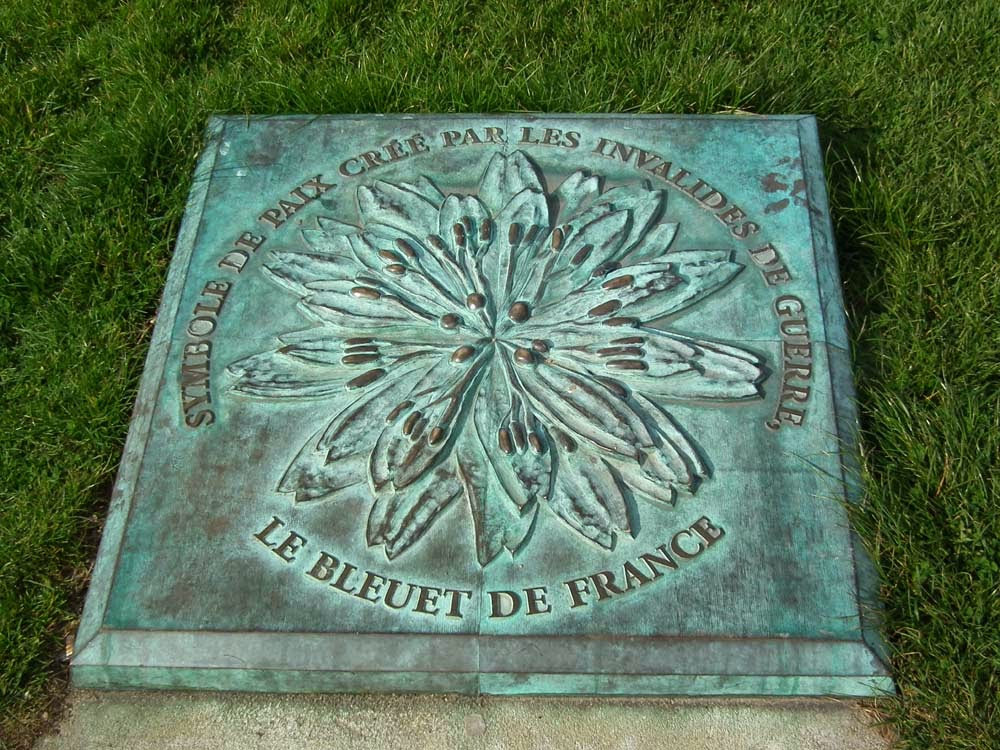 The First World War was an historic watershed, in terms of its violence, duration and international nature. It marked the end of an era.

The end of the Great War in 1918 left a legacy of more than 20 million wounded and invalided, some severely disabled, who could no longer work. In addition, in the immediate aftermath of the war, all the effort was directed toward reconstruction, whether that be economic, human or infrastructure, and separate to programmes put in place by the State, private co-operative initiatives and associations of all sorts were born.

It was in this context that the Bleuet de France (Cornflower of France) saw the light of day.

The story of the creation of the Bleuet de France begins, having come out of the First World War, at the Institution Nationale des Invalides (the national military hospital and nursing home in central Paris). At its heart are two women of the time, listening to the suffering of their contemporaries: Charlotte Malleterre (daughter of the Commandant of the Hôtel National des Invalides) and Suzanne Leenhardt, both nurses at the Institution, who wished to help the disabled of the First World War. From 1925 they created a workshop for the pensioners of Les Invalides in which they made cornflowers from fabric in order to give them back some sort of normal life and partly support their needs by the sale of the flowers.

The wild cornflower was chosen as the national symbol of remembrance, but why? Several hypotheses exist.
Soon the initiative developed and became nationwide. People wanted to express their recognition  and come to the aid of these men who sacrificed their youth to defend France. That's why it was decided for 11 November 1934, for the first time, to sell the flowers made by the veterans, on the public street in the capital. 128 000 flowers were sold. It was a real success and followed by the State making the sale of cornflowers throughout France on 11 November official in 1935. After the Second World War, in 1957, the State created a second collection day on 8 May.

Then in 1991 the National Veterans and Victims of War Office decided to take on the administration of the work, which had been declining for some years. From a workshop making flowers a charity supporting veterans and victims of war has come through the 20th century with its goals intact and active.

Today, at the beginning of a new century, the work of the Bleuet de France continues on new fronts,  promoting alongside traditional social actions the transmission of memory as a real vector of solidarity between generations.

For those of you who want to read all that in French, here it is.


A poster calling for volunteers to help maintain and care for the graves of French soldiers in France and overseas, especially those which no longer have family to care for them. Le Souvenir Français is an organisation dedicated to maintaining the memory of those who have died for France. 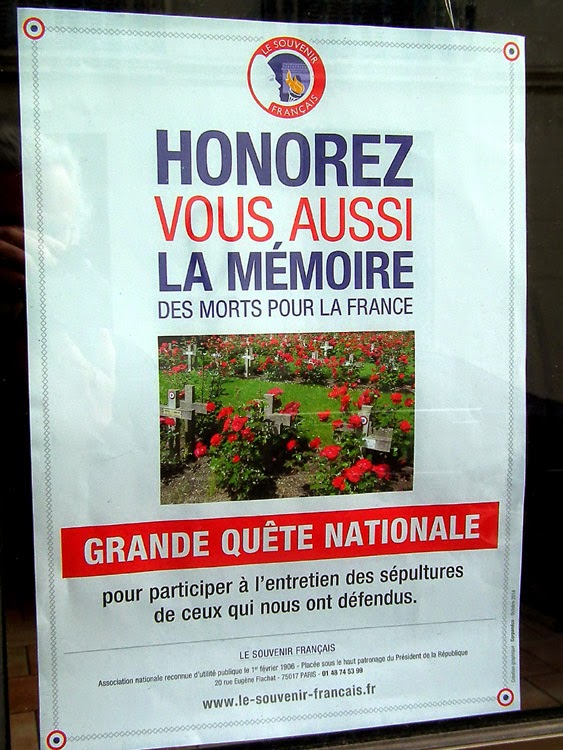 Just been outside to check...
and the "bleuets" are still in flower this year...
quite fitting...
they've gone on a good month longer than normal!!

At the same time...
in Remembrance Day...
the sounds of a hunt in full swing...
somme-where on the plateau 'twixt us and Chaumassay...
not what I would call respectful...
!!!

Thanks, Susan. Interesting information. We wore our poppies at the Armistice gathering in LPP, but there wasn't a bleuet in sight.

Tim & Gaynor: I'm amazed you don't have someone collecting for le Bleuet. You don't get a fabric one these days, just a sticker with a stylised cornflower on it which gets pressed on to your coat to show you have donated. Our collection guy in Preuilly was doing the rounds. Souvenir francais had been hard at work spiffing up the graves in the cemetery too I noticed. Apparently there was a working bee on 1 November.

Susan, I always thought that bleuets were Chicory flowers...
the one on the memorial certainly is not a cornflower!!
It is a chicory!!
So I am inclined to think that the Bleuet de France is actually a Wild Chicory and not the Bleuet des Champs.

And, chicory seed and plant is more likely to survive the bombardments...
you can divide mature chicory plants...
cornflower is an annual
and is less 'long-lived' in the summer and autumn than chicory.

Agreed!! But...
I'm talking about the memorial...
Look at the structure, Susan...
the flower on that memorial casting is NOT, and I repeat, NOT a Cornflower...
it is a Chicory!!!
The battles were fought in an area where chicory/endive was a major crop.
Bleuet des Champs is Cornflower...
I agree!!
But that flower on the memorial isn't the right structure for a cornflower head on.
But it is right for endive/chicory...
in fact a cornflower, even if you'd flattened one out, is sharper and more spikey at the tips than on the memorial slab...
and the tips would splay outward.

Wild cornflowers are a simple ring of large tubular petals... around a tight inflourescence...
like a blue knapweed.
On the other hand, chicory is a double ring of simple petals with long stamens and short styles.
As pictured on the memorial casting...
so, somewhere, somehow, someone has either cross identified the blue flowers around Ypres and the Somme as one flower and not the other...
Or, in 1918, the Bleuet de France was the name given to the "wild" chicory that was seen, not knowing that it was endives...
that is why I said...
it makes one wonder...
Why use the wrong illustration on the casting?

Very interesting. I had heard of the "Bleuet de France" but had no idea of the history behind it. Good post at a suitable time.

Tim: I see what you mean. Good points. Someone somewhere along the line was obviously a bit crap at botany. I think the original intent must have been cornflowers though, as the blue of chicory is too pale to be associated with the flag.

Susan, not necessarily...
the blue of our endives is far stronger than the real ones...
much closer to the uniforms that were worn...
which were quite a bit paler than the flag...
that's why I'm wondering...
was it originally chicory and "moved" to cornflower to be closer to the flag?
I am presuming that the memorial is fairly contemporary with the original setting up...
and, talking of setting up...
they are now producing fabric ones...
in France...
made by the disabled...
500,000 this year...
and a different pattern from last year's Chinese made ones.
At that few in number.... presumably only available in Paris....
and to public figures.
Presige, dontchaknow!!