Here and There: Butcheries 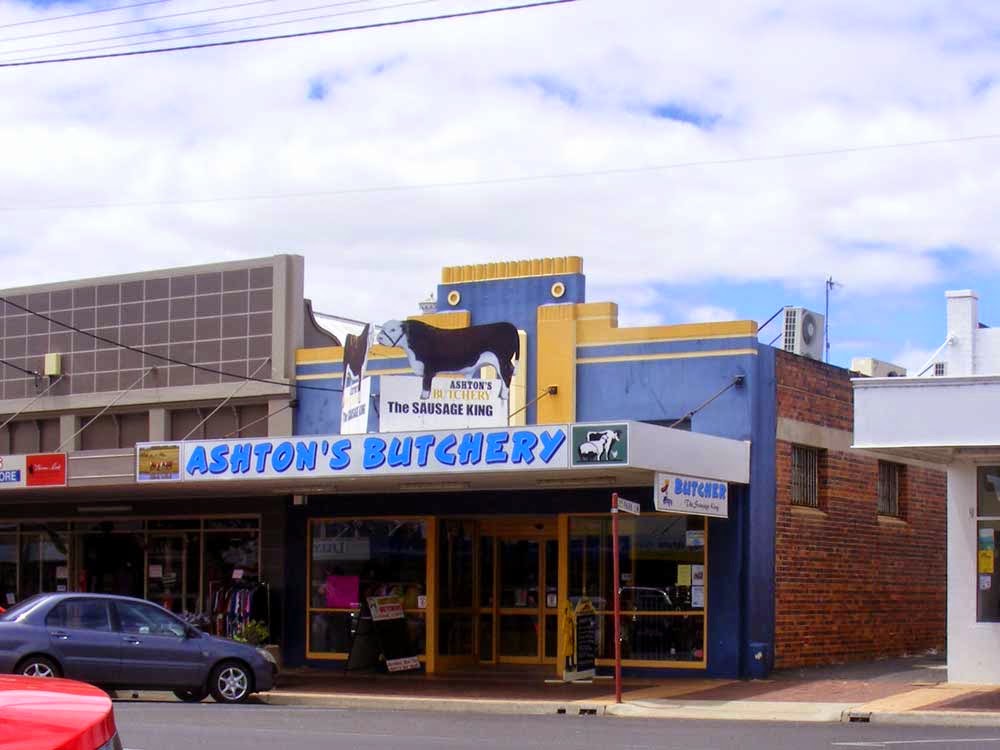 Above, the butchers in the small Australian town I grew up in;
below, its equivalent in Preuilly. 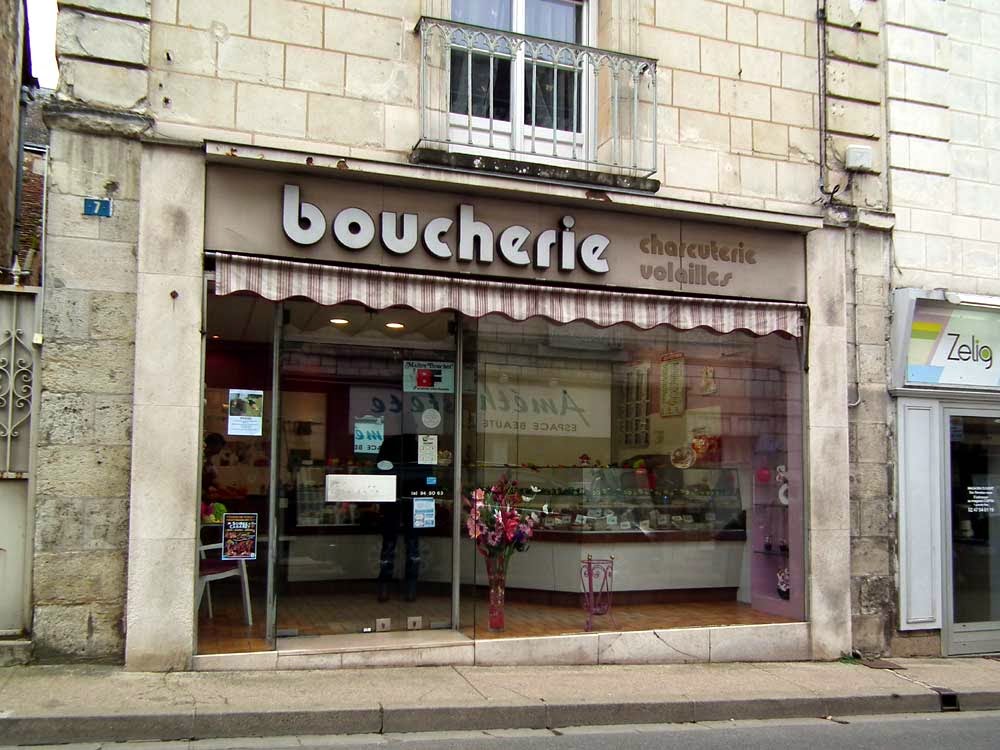 Salt pork and beans -- soak beans (I used local lingots, a type of white dried beans like cannellini) then cook. Cook the salt pork (I used a jambonneau demi-sel, a brined knuckle, weighing just under 2 kg) in 3 - 4 litres of water with a bouquet garni or several sprigs of thyme and a couple of bay leaves. The pork will take several hours of slow cooking and needs to be just about falling off the bone. Dice two onions and fry them. Dice two carrots and four sticks of celery (I used our homegrown). Break up the pork and discard the bone, skin, fat and herbs. Put the meat back in the cooking liquid, along with the drained beans and vegetables. Cook gently until the carrots are soft. Season to taste with chilli or pepper and serve in bowls as a soup.
********************************************
Au jardin hier: I planted a row each of garlic and onions yesterday. My usual varieties -- Thermador and Stuttgarter Reisen. I'll plant another row of onions soon. The aged orchard neighbours are most impressed with Tim's mowing and my 'hay' raking. Other oldies have gone past the orchard and noticed the cut grass piled high around all the trees and it meets with universal approval as something very good for the trees. I was also interested that today one of them informed me that cutting the way we did is much better than whizzing around on a ride-on mower. This same person asked me what I did with my orchids -- soup? (that was a joke). I got teased a bit because their garlic is already 10 cm high and I am running late as usual. I also got asked if I was going to sow broad beans and peas and if I saved my own seeds. The answer to the second question is no, which induced teeth sucking -- buying seeds is expensive! I said I might sow broad beans to overwinter, but was worried the rodents would eat them. The aged one has a cat, but agreed it was a problem down at the orchard.

Rummaging around in the compost I unearthed several rose chafer grubs, a violet ground beetle larva, two disposable razors and a box for keeping AA batteries in for the camera. Hmmm...

Just as I was packing up to leave the orchard at about 5.15 pm (sunset at this time of year) a flock of 35 cranes flew over. As usual I heard them first. They were coming from the north-westish and heading south-eastish, for an overnight stop in the Brenne I would guess. Another small flock had gone through an hour earlier, but those I only heard, didn't see.
Posted by Susan at 09:00

Don't forget to rake it all away from the tree bases in about at end of Winter / beginning of Spring so that the birds, etc. can come and scoff all the "lovely grub"(s) that you will have accumulated.

Did you get a chance to see the roosting at Mer Rouge...
the Brenne beat its record with 35K recorded!!

Tim: No we didn't go over to see them due to other commitments. I was ridiculously excited to see the cranes yesterday. I wished them well on their journey.

It is always exciting, isn't it?!
Apparently there are still a lot there!!
This weather is holding them back...
we've just got back from the Brenne...
but didn't get to see the cranes...
chooks to put to bed...
that will probably be the case from now on!!

Tim: I hope the chooks are settling in to their new home happily.

They seem to be...
and they take themselves off to bed...
before nightfall!!
Very good habit...
wish I could early night occasionally!!

Tim: Hah! So Roger and Beryl had them well trained.