The smallest bat species here, such as Pipistrelle Pipistrellus spp and Lesser Horseshoe Rhinolophus hipposideros, weigh between 5 and 8 grams during the summer. They only need to put on a couple of grams of fat and they are ready for hibernation! By this time of the year they are tucked away in their hibernation site (although warm dry nights may still tempt them out). Lesser Horseshoes stay in hibernation from October to April, much longer than Pipistrelles, who don't get serious about hibernating until November and emerge as early as February if the weather is good. Their tiny size is why it is so important not to disturb them while hibernating. A single awakening could lose them enough energy that they don't make it to spring.

A downed Pipistrelle in our garage, not taking the hint to move into the nice safe toilet roll tube I am offering it. I'm wearing gloves because it is potentially not safe to handle bats with bare hands as they can carry serious diseases which can affect humans. 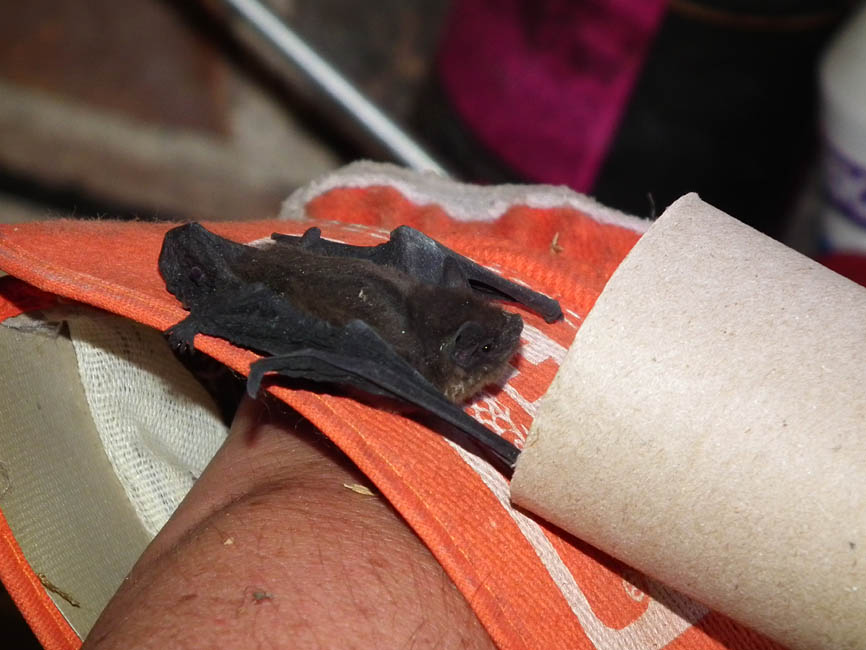 Bats have a dilemma though as they work to bulk up for the big sleep. They can't afford to get too fat or they risk being too heavy to fly. Both Pipistrelles and Horseshoes are exclusively insectivores. During summer they catch and consume as many as 3000 insects a night (I saw a calculation that worked out that this is the equivalent of a human eating 50 pizzas in a night), but during hibernation they wake only occasionally, if at all, to eat or drink. There are fewer insects around, so they conserve energy by hibernating. It's a delicate balancing act, putting on just enough weight to get through the winter. This is one of the reasons bats often roost socially -- they help keep each other warm. Roosting sites, which are used during the summer, can be tree hollows, rock crevices and all sorts of nooks and crannies in buildings (behind shutters and render which has partially detached from the wall are favourite places for Pipistrelles especially).


A hibernating Lesser Horseshoe in an old underground limestone quarry.
Horseshoes are easy to recognise because of their habit of wrapping themselves up in their wings. 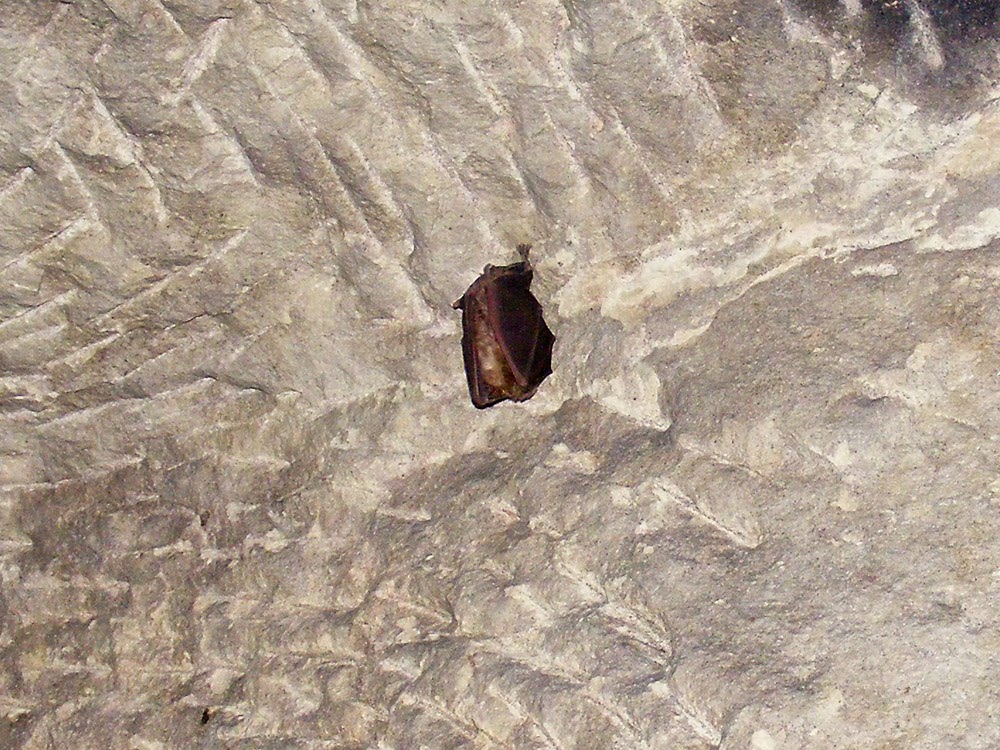 The hibernation sites here (as opposed to summer roosts) are generally abandoned limestone quarries, known as caves. They have stable low temperatures and constant relative humidity. In such places bats can safely enter a state of torpor where they lower their body temperature, slow their breathing and reduce their metabolic rate. By the time they emerge in the spring they will have lost half their body weight.


A small brown bat which I think is a Pipistrelle, but could be something else. 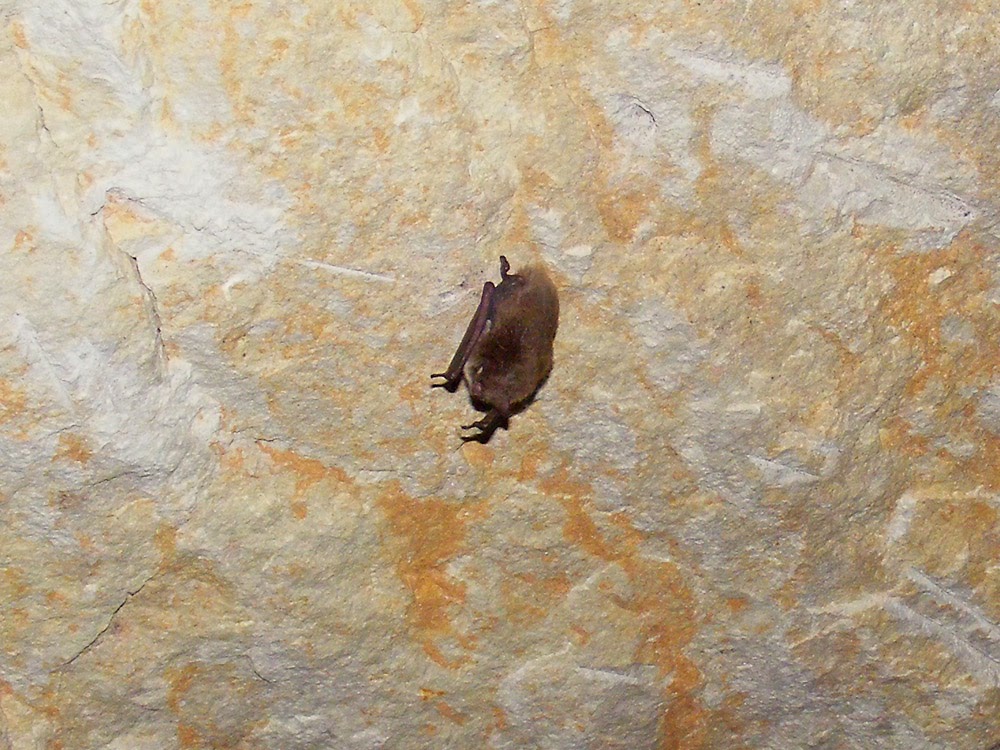 These little bats are about the size of a teabag, with a wingspan of about 20 cm. They live on average about 5 years but can live to 15 or so. The locals are quite tolerant of them, often recognising the sterling service they provide in terms of eating mosquitoes and midges. All bats are protected species in France. Nevertheless life is fairly tough for them here. Modern agriculture and its intensive use of insecticides is reducing their larder, and the many domestic and feral cats make their life a misery if they choose to roost in buildings or hunt near human habitation. Fewer and fewer roosting spaces are available in buildings as people renovate and fill gaps, block holes and renew blown render. Common treatments for woodworm in rafters and beams can have the unintended side effect of also poisoning roosting bats, even years after the treatment was administered. Bats like to follow linear features when hunting, and the loss of hedgerows in the countryside as fields get amalgamated to facilitate larger and larger machinery has affected the hunting success of the Lesser Horseshoe bats in particular.


A Pipistrelle flying over our garden. 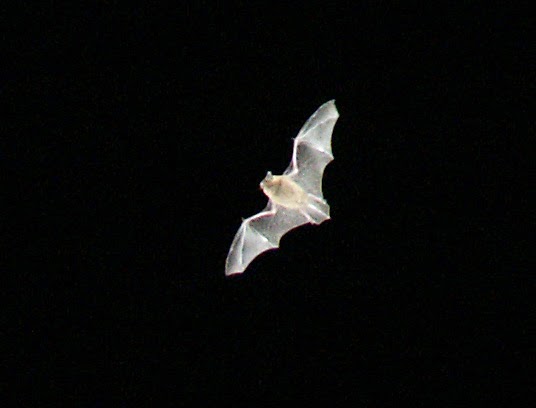 *******************************************
A la cuisine hier: Nutcracking. Honestly, this is the most tedious task in the kitchen that I can think of, with the exception of peeling chestnuts. Walnuts are alright -- they are large and I never have a huge crop of them as our trees are still young. Hazelnuts on the other hand are always abundant, and about one shell in three is empty, even after culling all those with weevil holes and those that don't come away from their husks cleanly, as these are always empty. Their small size means they don't work with many commercial nutcrackers and you risk getting your fingers pinched. This year I resorted to holding the base of the nut steady in some pliers and whacking them smartly on the tip with the meat mallet. Still took hours and some nuts were still fiddly.
Posted by Susan at 09:00

Very informative article m'dear...
you are obviously completely batty!!
We want to treat our main timbers as the longère is re-roofed... but are finding it very difficult to source the bat friendly stuff in France...
and we've only got just over a month to source it.

I see you are also completely nuts...
Pauline now does it while sitting on the settee with a hammer...
the ship's wheel hit the floor and I need to glue the bits back in before she can use it.

And, after watching a clip on Auntie Beeb about this years "Outback Joe" competition...
I now understand why you specialized in flies...
and I thought they were bad around here!!

So, going batty again...
I wonder how the neonoctive insecticides affect the flying mice?

Oh... and nuts...
especially walnuts...
keep better in their shells until needed...
which means you only need to crack the ones needed for the Waldorf...
or next cake...
it is not so damned tedious that way.

Tim: My inclination would be not to treat the roof timbers at all. I don't see much point. Treatment doesn't penetrate far enough to kill target species until they emerge, by which time it's kind of too late. Much better to concentrate on 'good housekeeping' -- making sure the roof is dry, monitoring annually.

No idea about neonics and bats -- no research as far as I know.

The walnuts are getting used today. The hazels have been frozen. I'd rather have a stock of prepped nuts on hand than have to triple the time on the day it takes to make something because I have to crack the nuts first.

The type of timber treatment we are look at is one that "fossilizes" the outer wood... turns it to stone.
It is recccommended by the UK "batters"...
our timbers are sound...
we want to keep them that way...
and once covered, we won't be able to inspect them.

On another note... invasive hornets... noticed "your" nest in the NouvelleR today...
haven't read the article yet, though.

Tim: We saw the article too. I've translated it and added it as an update to the post.