Dining at The Ivy 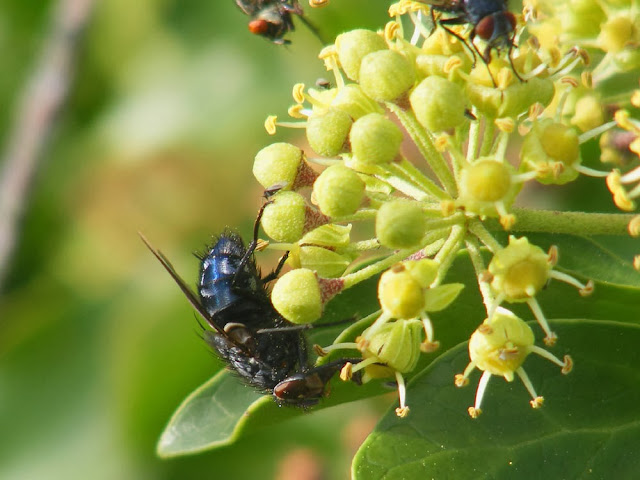 At this time of year the Ivy Hedera helix is flowering and is clearly very attractive to many insects, particularly flies. Although ivy produces both nectar and pollen, it is the nectar that most are after. Only the Ivy Bee Colletes hederae seems to be particularly interested in the pollen. Other bees and wasps will use both, but the day I photographed the ivy at the orchard there were only a couple of parasitc wasps in view, and at least 16 species of fly, from 6 families. This is not surprising as studies show that flies make up over 50% of the visitors to ivy.


A male Stomorhina lunata slurps away on the ivy. 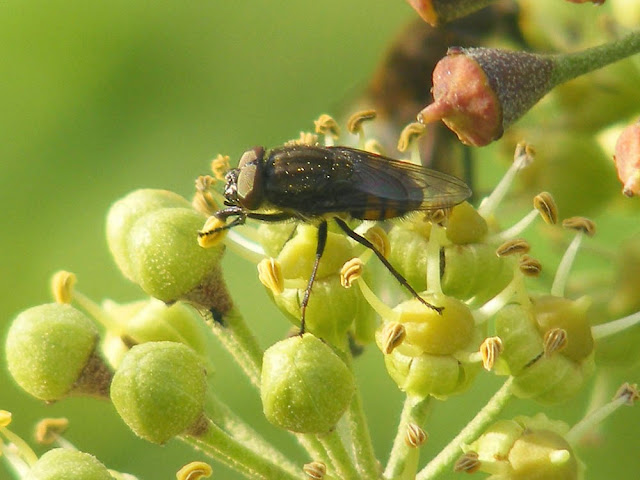 Only mature ivy flowers. It is identifiable because its leaves are plain rather than the five lobed type we prize in the garden. It flowers for the whole of the autumn, much later than most other nectar sources, and the flowers will top up their nectar once it has been tapped by an insect, so it is like a bottomless cup. 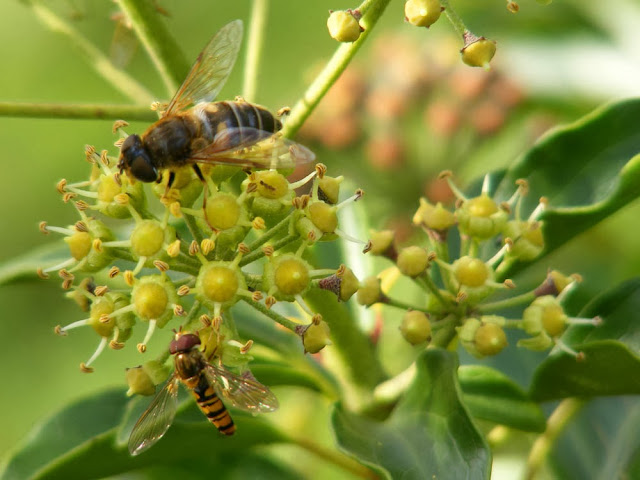 Honey Bees Apis mellifera will happily forage on ivy, but about half the 'honey bees' you will see on the ivy will be hover fly mimics from the genus Eristalis. 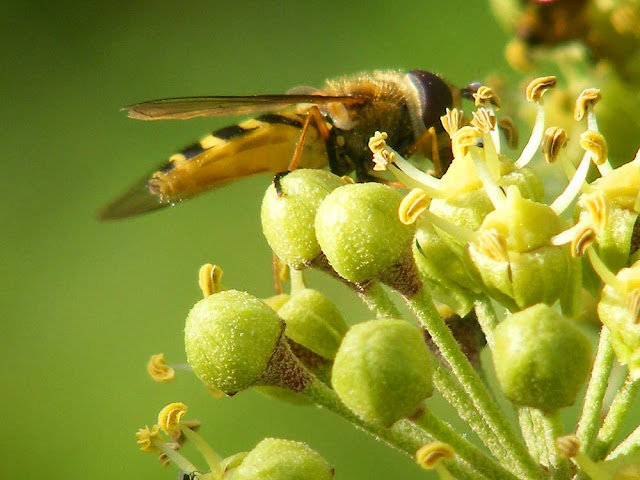 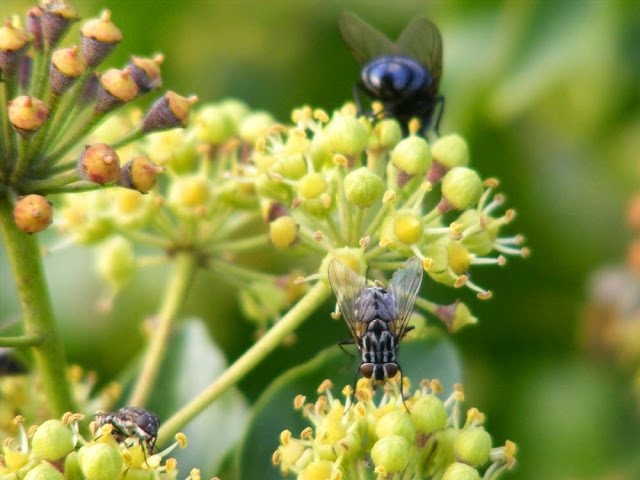 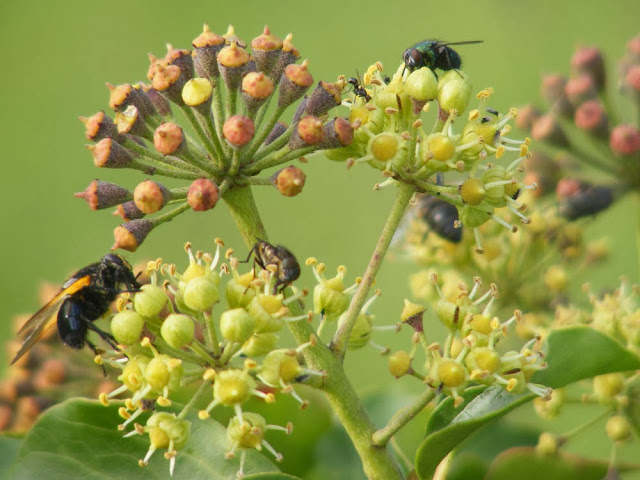 A group of drone flies, greenbottles and a parasitic fly. 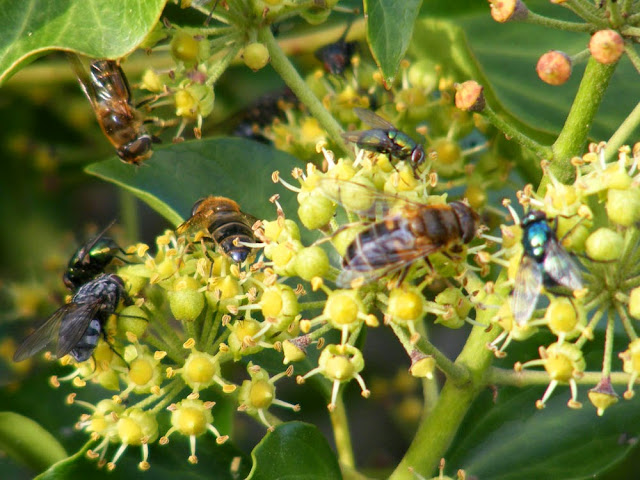 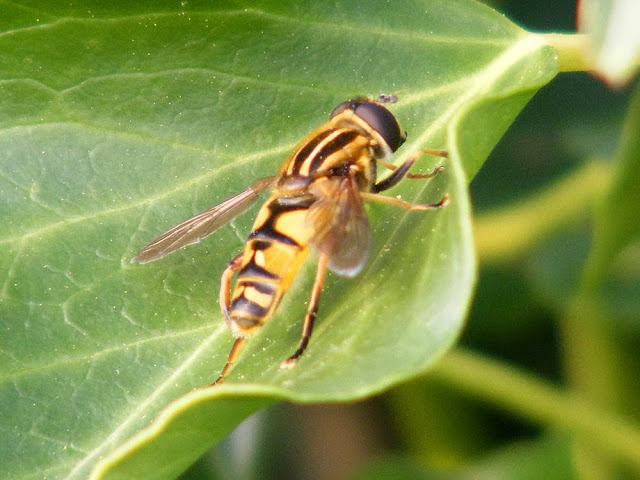 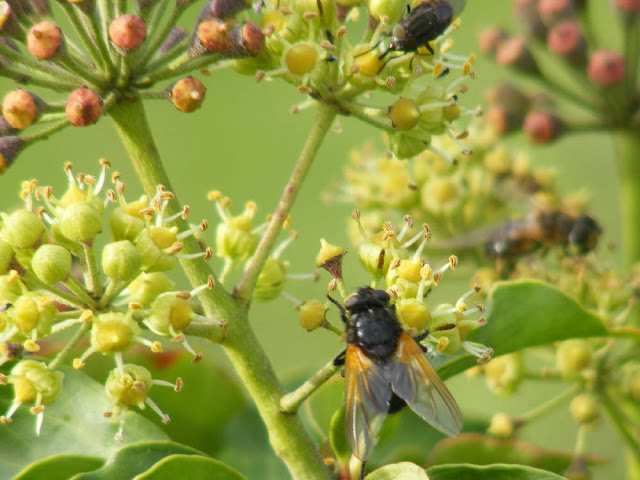 Upper left, a Noon Fly and a parasitic fly, below them an Urban Bluebottle Blowfly and to the right a couple of drone flies. 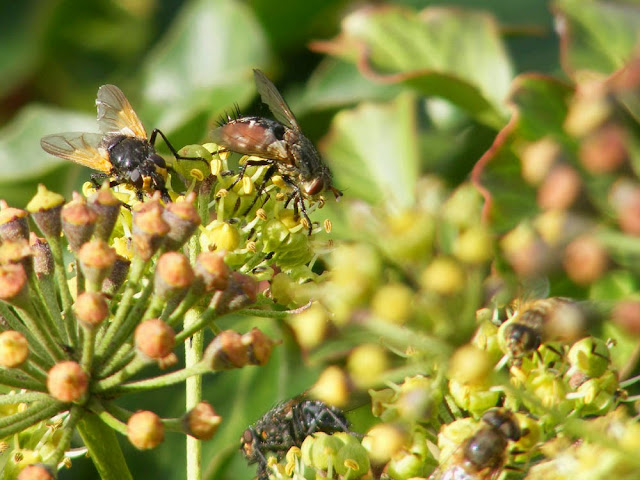 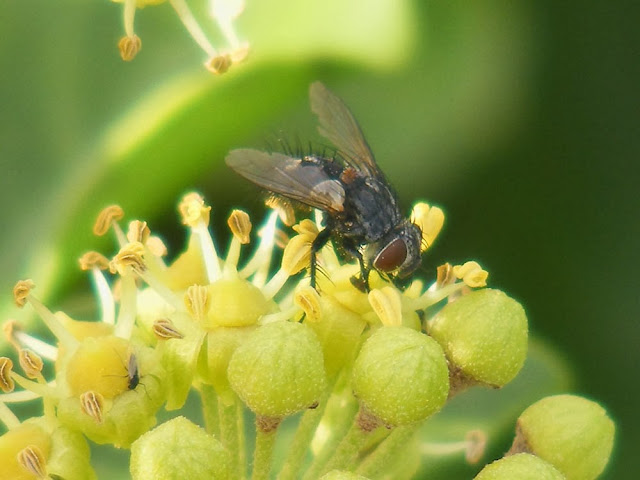 I have a patch of blooming ivy right now in my yard in Virginia and it is extremely busy with myriads of various insects, just like yours.

chm: A patch of flowering ivy in the sun is guaranteed to be humming.

Marvellllus guide to insect identification...
I like the Striped Hoverfly...
very distinctive back...
given your knowledge...
howzabout a pictorial guide to flies and fly types on LVN??

Tim: actually it's the largest and most common of several similar species. To ID you need to look at the dorsal abdomen carefully. My fave of the ones above is Stomorhina lunata. Re a guide -- isn't that what Chinery is for? -- gives you a general idea of the possibilities, then you go species hunting.

The closer you look, the more you see! Wonderful creatures. I spent an hour yesterday trying to photograph wasps on the ivy - at least 3 different species just of big stripy ones.

PG: yes, there are all sorts of out of focus beasts in the pictures in addition to the ones I've named. Hours of fun.

I thought you were agin Chinnnnwagery?
Actually, I find him very difficult for flies... all the pictures look very samey in a group...
and I prefer to look at pictures that tell me something that I am likely to see.
I am looking for something that works like that French butterfly site you pointed me at...
colour first...
then shape...
then finer details...
etc.
Need the same for flies and other insects, etc.

Tim: Chinery is great so long as you are aware of his limitations. Flies just are difficult, they do all look the same, there are thousands of species. To tell them apart you have to look at features barely visible to the naked eye -- bristles and wing venation and so on.

This is a great look at the flies on the ivy. I must admit they are not amongst my favourite insects but there are always some stunning ones on the ivy. Amelia

Amelia: Flies get a lot of bad press.