A couple of weeks ago someone brought these big yellow mushrooms to a fungi foray. I'd never seen or heard of this species before, but it turns out to be very interesting for more than just its size and yellowness. 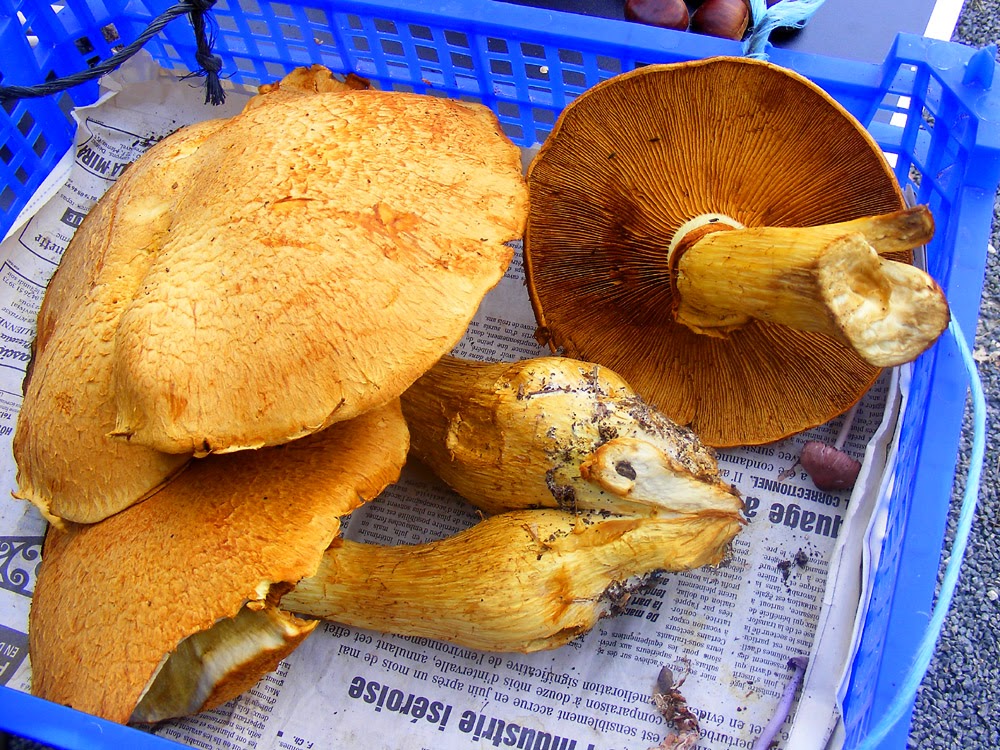 This is Gymnopilus junonius, otherwise known as the Spectacular Rustgill and it is one of the magic mushrooms. It is hideously bitter (as confirmed by someone on the outing who tasted a bit, then spat) and apparently turns green if you cook it. It contains the hallucinogen psilocybin and a neurotoxin as well as a couple of other mind bending chemicals. One of the various effects of psilocybin is uncontrollable laughter, leading to this species having the nickname of Big Laughing Jim. However, the quantities of interesting chemicals vary considerably from mushroom to mushroom and from place to place. Sadly for all you unreformed hippies out there who can't wait to get out foraging after reading this, the species is more likely to make you very sick than give you a trip. Plus, small ones can easily be mistaken for the deadly Galerina spp.

Coming from Tours or Sainte Maure by the A10 or D910: From the A10 take the Châllerault Nord exit. Take the bypass to the right of the roundabout.

Coming on the D910 from Ingrandes: At the second roundabout go towards the A10 crossing the Vienne and at the roundabout, take the second exit on to the bypass.

Then follow the bypass (several sets of lights) towards Poitiers. At the Châteauneuf roundabout continue straight through up to another roundabout and go right towards Le Lac. Then continue to the left at the roundabout then right at the following roundabout.

Due to the letterbox shape of the laptop screen...
all I saw at first was the title...
and what looked like a pair of huge, hairy legs...
obviously this mushroom has effects that can travel the ether!!

I think it should be Gymnopilus, without the h. Wikipedia confirms that. It's not even in my Larousse Champignons guide. There's another species listed, Gymnopilus spectabilis and it looks similar. The book says it has a goût amer et est parfois considéré comme toxique. No mention of hallucinogenic side effects.

Ken: You are right. I've inserted a superfluous h. Removed now. G. spectabilis is the old name for G. junonius.

I love the name!