Saint Porchaire was a 7th century abbot who was buried near where the church now stands. His tomb became a place of pilgrimage. In the late 9th century, during the period of the Norman raids, his remains were gathered together and placed in a stone sarcophagus which was stored in an underground sanctuary on the site of the church. The remains of this sanctuary form the foundations for the current tower and crypt. 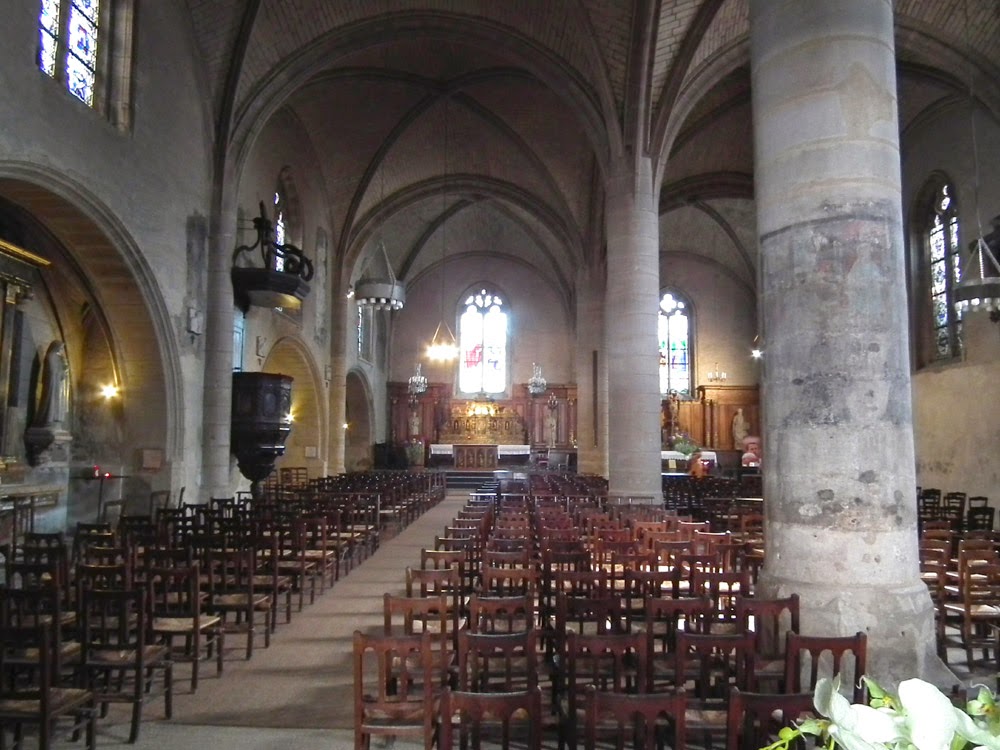 The current church has an 11th century clocher-porche, that is, one enters the church via a porch under the bell tower which rises from the front. The bell itself, called Anne, came from the university and was installed in 1431. It is the oldest bell in the département of Vienne and is joined by two later bells, from 1771 and 1803. All three bells were restored in the 19th century by Amédée Bollée. Inside, the church is a double nave, in the Gothic style. The stained glass is 20th century.


A gravestone from the cemetery which once occupied the land on the south side of the church.
It is the from the 16th century and commemorates an alderman who commissioned a covered fish market in the town (hence the fish emblems). 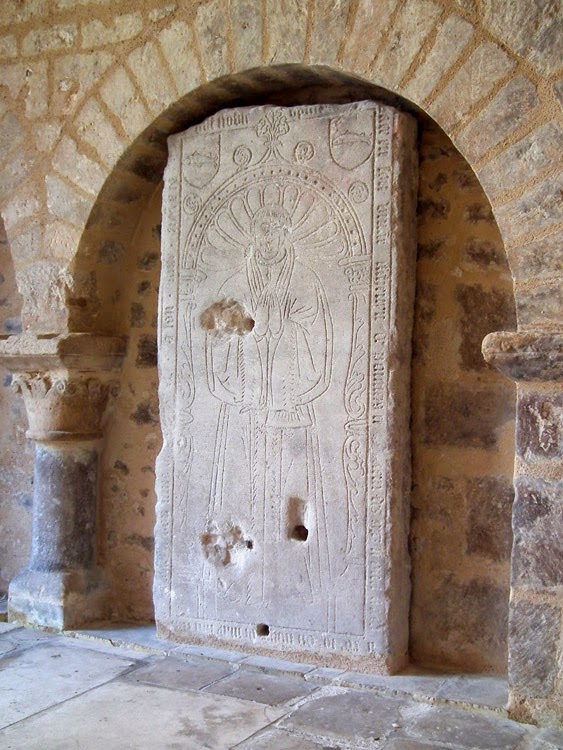 By the end of the 15th century the church was virtually in ruins, so in February of 1509 work on a new church began, to be finished in 1520. By 1840 the church was once again in ruins and the local authority decided to demolish it. Prosper Merimée and his band of crusading antiquarians got wind of this and launched a three year campaign to save the building, and  by 1846 it was heritage listed.

I would have thought that the temptation to ring a 15th century bell would be too much for many a visitor, but there appears to be nothing to stop you doing so if you are overcome by the urge... 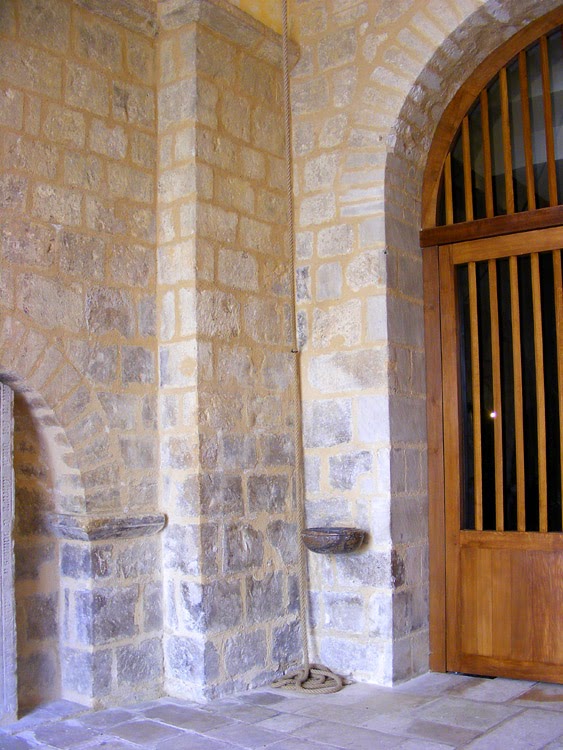 In 2011-12 the clocher-porche was entirely restored, including completely removing, repairing and reinstating the internal spiral staircase, as well as cleaning the exterior. 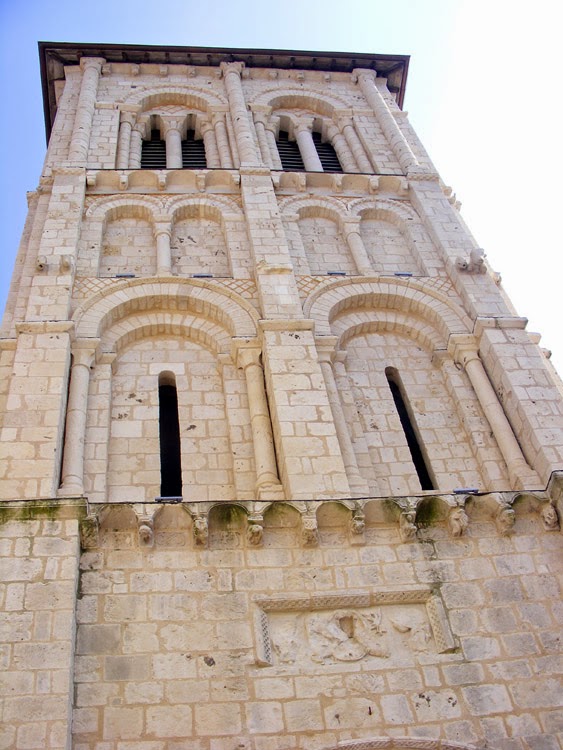 For much of its life the church has been an ordinary parish church. Earlier this year the parishioners were saddened to lose their high profile and energetic priest, Father Gourrier. He received his calling relatively late in life, becoming a priest at the age of 40 in 2000, after having been the head of a Paris publishing company. He's a regular on the Radio Monte Carlo show Les Grandes Gueules (The Loudmouths), a daily 3 hour (!) current affairs talk show (a bit like BBC Radio 4's The Moral Maze). The programme regularly courts controversy and lively exchanges are common (personally I don't listen to the programme as it is too shouty, especially when Claire O'Petit is on).


Saint Porchaire's rather mini sarcophagus and his statue above. 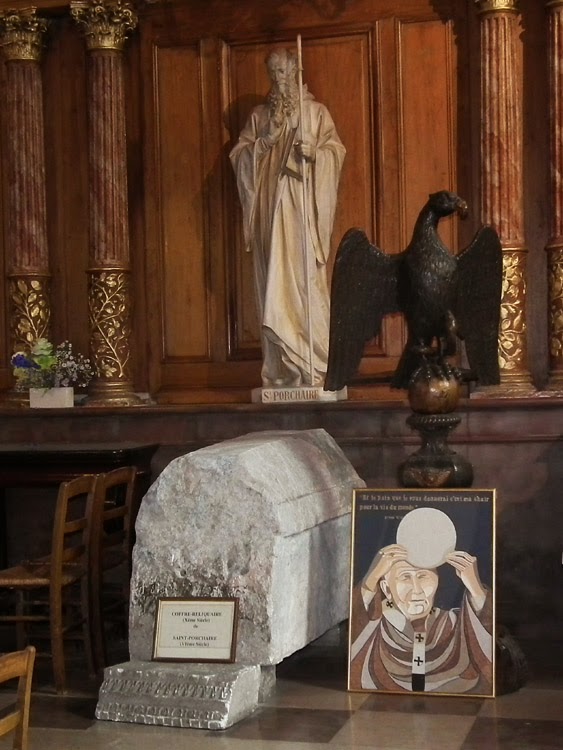 Father Gourrier is a trained psychologist too, and after a sudden and serious illness 18 months ago has now been tasked by his archbishop with counselling and mentoring trainee priests in Poitiers. The parish is being merged with another, and Father Gourrier is looking forward to 'fewer meetings, more meditation'.


This rather random group of carvings appealed to me. From left to right it appears to be a lemur (maybe a monkey or a squirrel -- who knows...); two men whispering in the ears of a rather bored looking young woman; a king; a Celtic motif; a woman swinging a tennis racket/frying pan/banjo (take your pick...); a crocodile; a knight. 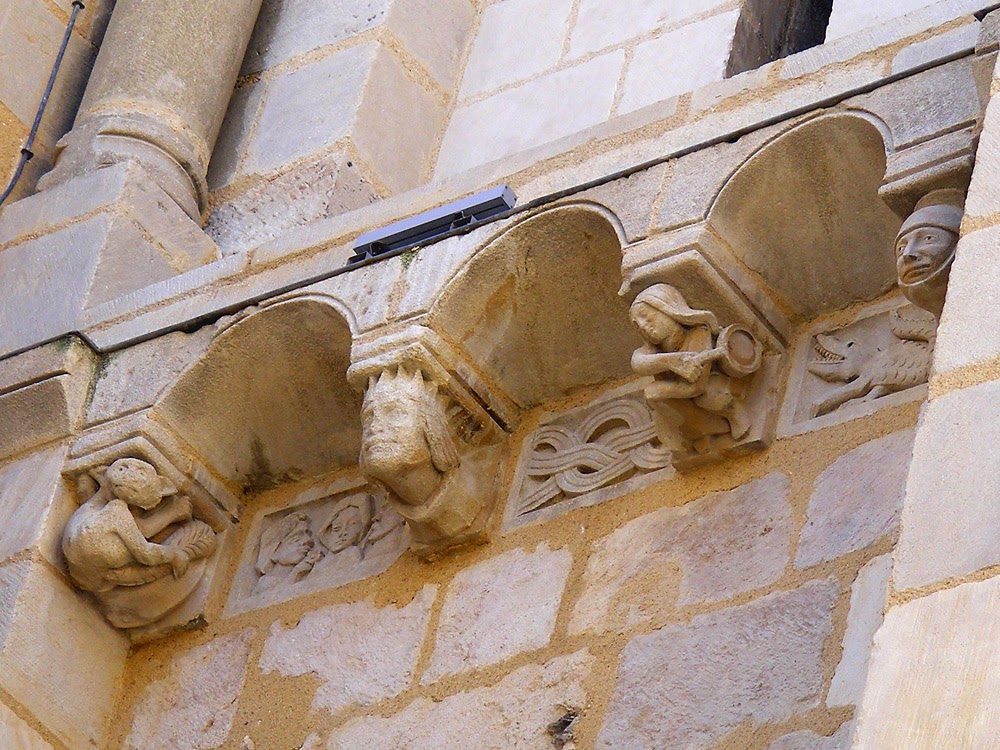 *********************************************
Dental Drama: Sunday night Simon developed an agonising toothache in a tooth that broke about 6 weeks ago. So yesterday I phoned for an appointment with the dentist. The earliest appointment they could offer was on Thursday, but they promised to ring us if something earlier became available. Luckily they rang at lunchtime to say he could come in at 3 o'clock, and he spent an hour in the dentist's chair having emergency root canal work done. I sat in to do any necessary translating and it did not look pleasant. He has very deep roots and the dentist has made him four more appointments to finish the work and give him a crown. The appointment, which included two x-rays, anaesthetic and lots of poking and excavating, cost us €23. He's given us a quote for the crown -- €280 for a metal crown, €445 for a ceramic one. He says there's no advantage of the ceramic one other than aesthetic. The State health care base charge for a crown is €107.50 no matter which sort you get, so our reimbursement is the same whichever crown Simon chooses. I think we'll get about €50 back on the crown.
Posted by Susan at 09:00

that's still cheaper than here....just had a couple crowns done last spring & the going rate is about $1000 (tho I did get a bit of a discount cause my brother in law did em)

Thank you Susan for those very well documented posts about humble, but lovely and interesting structures.

Melinda: We thought it was very reasonable. Cheaper than the UK, although the state contribution was higher there so probably about the same in terms of our contribution at point of use.

My sympathies to Simon. When there's that much pain, the cost is secondary.

Ken: It was only the pain that resulted in him going to the dentist. He'd put it off up till then.

Poor Simon... One thing after another as they say. Pain is a good motivator for any health issues...

Great post on the church, there are some amazing churches with incredible histories in France.

I feel for Simon, both tooth and pocket. I seem to be ever having teeth problems despite having gone to a dentist every 6 month of my life since my first tooth appeared! Diane

Diane: There's always something you can say about a church for a blog post :-) Thanks for the sympathy too.