Fungi in the Orchard

Recently the Association de Botanique et de Mycologie de Sainte Maure de Touraine held its annual fungi exhibition. I went along to help set it up and I took the opportunity to get the fungi from our orchard expertly identified by my friend Jean Bouton. So this is what it turns out we have:

Warted Amanita Amanita strobiliformis (Fr. Amanite solitaire).
This one caused Jean to exclaim with delight, partly because it was a perfect specimen, partly because the species is rare. It is found in forests, oak woods, hornbeam woods on calcareous soil. It is a large white mushroom with flakes on the cap like many Amanita spp have (the most famous is the Fly Agaric).  The stem is thick and bulbous. Jean assures me it is very tasty and perfectly edible. However, further reading suggests that not only does it share the Fly Agaric's flaky top, it possibly contains the same hallucinogenic chemicals. Therefore, despite Jean's enthusiasm, I will not be eating it. 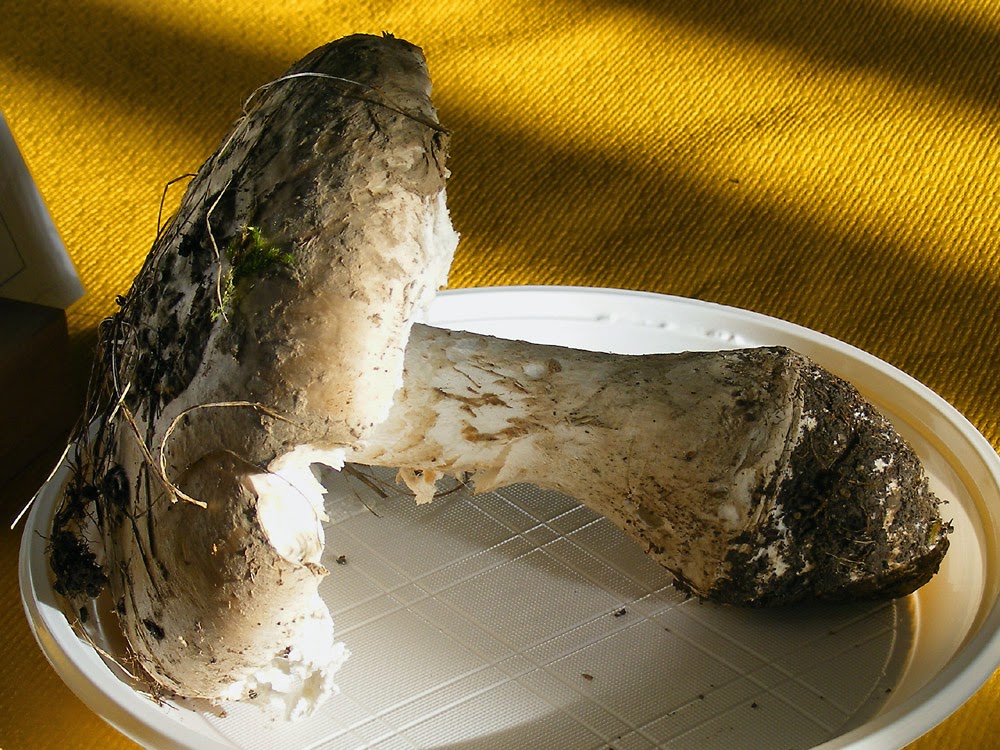 Ivory Funnel Clitocybe dealbata (Fr. Clitocybe blanchi).
This species is widespread and common, appearing in lawns, meadows and pelouses (short calcareous grassland). It is a small white mushroom that forms fairy rings. It is very toxic, potentially deadly and its nickname is the sweating mushroom because of the symptoms that very quickly develop (within half an hour) if it is ingested. The specific antidote to the poison muscarine that the mushroom contains is atropine -- so that's OK then -- if I accidently poison myself I'll just take a swig of Simon's eye drops that give him funny dreams or chew on the nearest Thornapple Datura stromonium, which is a terrible weed here. 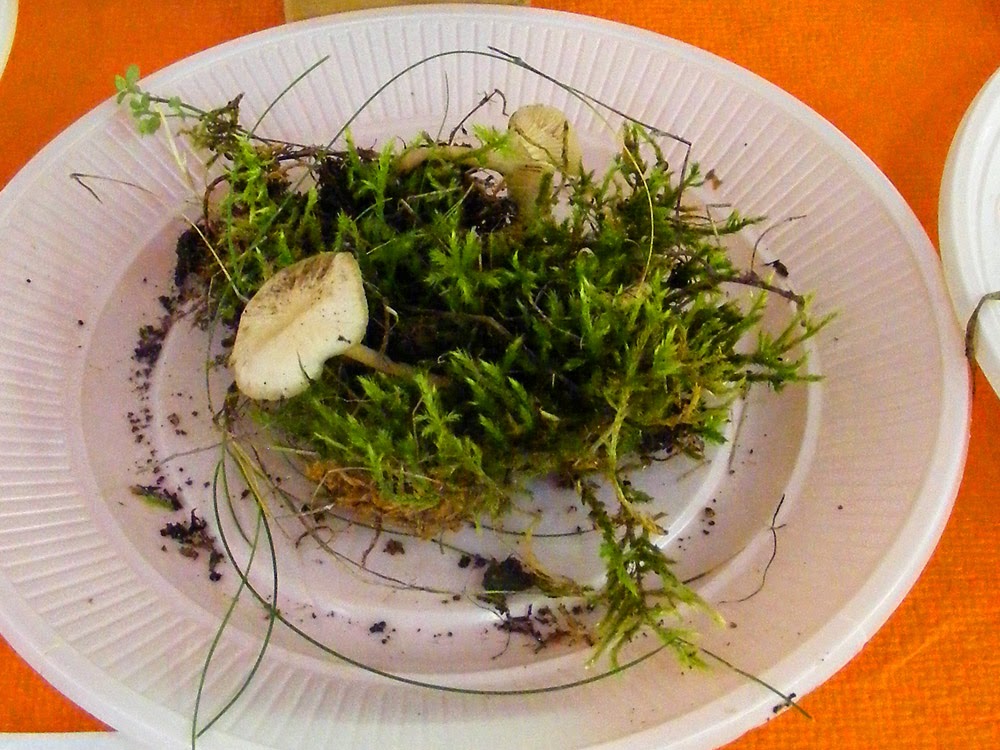 Weeping Bolete Suillus granulatus (Fr. Bolete granulé).
This mushroom grows in association with pines and is edible with the proviso that you are best to wipe off the slimy coating on the cap, as it has a laxative effect. The pores will produce milky droplets when fresh and removing the pores before cooking is also recommended.  Neither the pores nor the flesh stains when damaged or cut. It is the most common of the Suillus species that grow in a symbiotic relationship with pine trees and can be included in commercially available wild mushroom products. Apparently handling it can make some people come out in a rash. 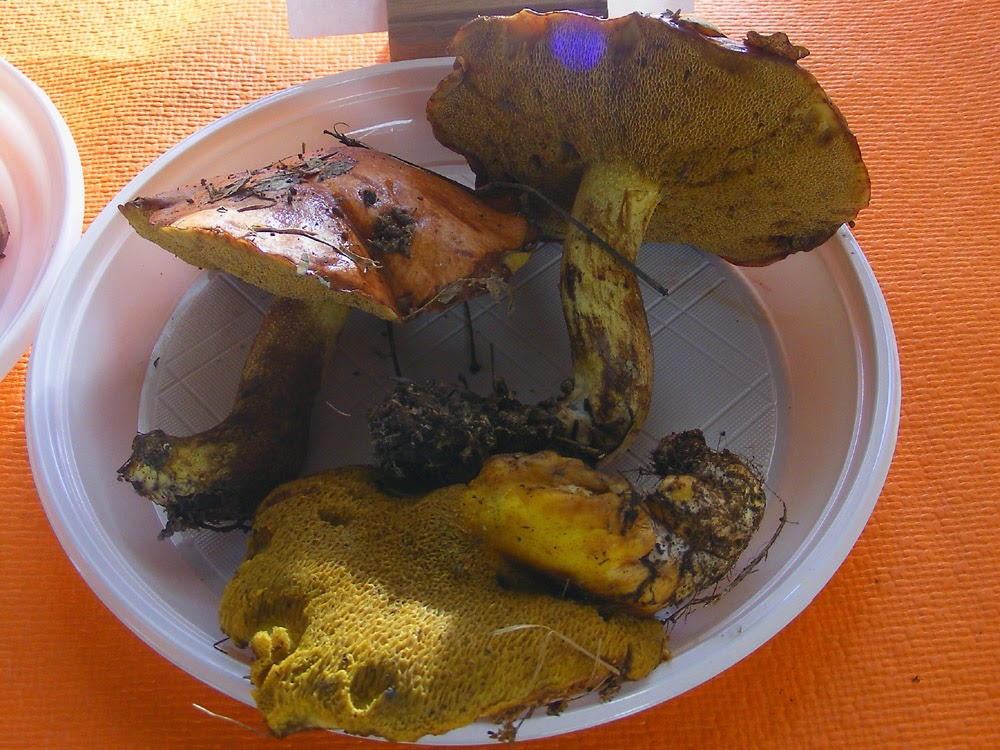 I'm off to check my camera to see if one we photographed on a walk the other day is an ivory funnel...

Gaynor: check your field guide too, as there will be several lookalike possibilities.

We have suddenly developed a lot of white mushrooms in the lawn... Will photo them and put them on our blog tonight... Not sure they are the same ivory funnel... (We have not had them before)

Colin: OK, I'll look out for that.

I love mushrooms, but only the edible ones!

We are lucky in that we live near large pine forests where edible European varieties,imported with the pines, grow; saffron milk caps and slippery jacks which are fairly easily identified. The tourist office in our town offers an identification service like the pharmacies in France. Of course there are many varieties of native Australian fungi, but we will never know which are edible as that knowledge is lost forever with the displacement of our indigenous people from the area. There are one or deaths a year from poisonings in the main from new arrivals from overseas who mistake our killers for their native edibles.

Fran: Not sure many people in Australia would count themselves lucky to live near a pine forest :-) The Weeping Bolete above is a close relative and lookalike for the slippery jack.

I'm not keen on the slimy top but didn't realise it should be wiped off. I will do so from now on. We've got the hang of gently pulling out and not cutting the stems.

LDP: The slimy cap is fairly offputting, isn't it.