Recently I bought a whole Atlantic salmon. It was priced at €5 / kg and weighed in at a smidge under 3 kg, so it cost me about €14.50. A while ago we acquired a fish kettle, kind of by accident. It sits on top of one of the kitchen cupboards and I hadn't previously used it.

Whilst I love salmon, Simon thinks it is boring, so I wanted to cook the salmon and break it up into portions that I could freeze, then use just for me if he didn't want to eat it. I thought what better way to do that than in the fish kettle.


You'd look a bit surprised too if you suddenly found yourself in a tight fitting stainless steel pan... 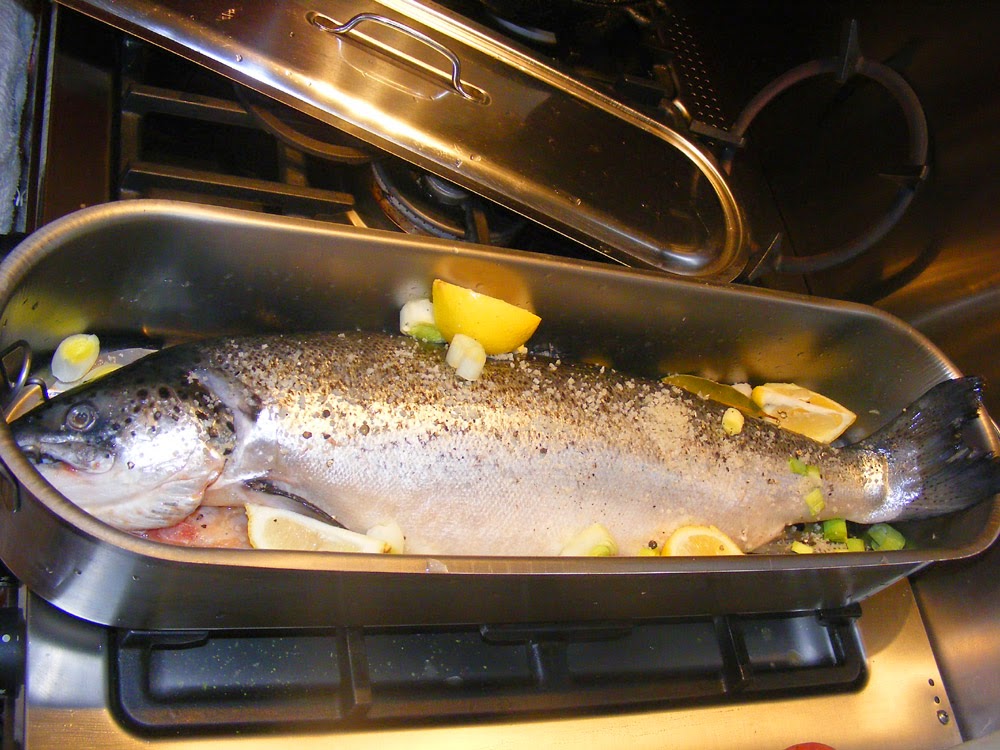 My salmon came scaled and gutted by the supemarket fishmonger, but it still had its gills. I cut these out with scissors because I had read that they can make the flesh bitter. I also trimmed the tail with the scissors, as the fish was slightly too long for the kettle.

Then I added aromatics -- chunks of leek, quarters of lemon, crushed black peppercorns, lots of salt, a couple of bay leaves and a small glug of a friend's homemade rosé wine which has rather unfortunately turned to vinegar. I put the kettle over two gas burners and filled it up with water. Once it was properly boiling I turned it off and allowed the fish to sit in the liquid until cool. Then I lifted it out, took off the skin, removed the flesh, checked it for bones and divided it up into 200 g lots. The yield was 1.5 kg of cooked salmon meat.

So far I've used one portion to make a sort of Nicoise salad for two with a very lemony dressing and it was good.

****************************************
A la cuisine hier: Walnut Treacle Tart made from homegrown walnuts. The mixture escaped but luckily didn't burn and we got to eat lots of treacley goo off the oven tray. This dessert was only made possible by the kindness of various British friends who keep us supplied with golden syrup and black treacle amongst other things. There is no French equivalent for either, although you can sometimes buy golden syrup in the supermarket here these days.

Sablés, from the leftover sweet shortcrust pastry. Simon loved them and scoffed most of them before dinner.
Posted by Susan at 09:00

You've just given me the idea for supper...
it is Friday after all.
We buy one of these a year...
last year I cut it into steaks and a tail... the head and everything else went into a soup...
it always surprises me just how much meat there is on the head.

This time I pre-did the whole steaks as pairs of "finger" steaks / pavés...
it still left the tail...
and the rest made another soup.
I eat the skin... that is where the "flo" lies.

On another note entirely...
I see that AiF is on page two of today's paper!!

I've bought whole salmon in the past as it is economical, if one doesn't mind battling with bones to make stock. In April, Itoo was donated a copper fish kettle. Have always coveted such an acquisition. I intended the same as you but people who like fish haven't arrived for such a feast.
I make that 10e per kg of edible fish, 2e for Salad for 2. Well done!

Tim: The skin is great if fried, but poached it's too gluey.

The AiF article was in the Loir et Cher online version of the paper a couple of days ago. It's very cute :-)

RiF: That's what I worked out too -- €1/serve. I made gallons of stock, but to be honest I have no idea what to use it all on.

You can use the fish stock to add to a fish soup or even as liquid if you are making paella with seafood.

Beaver: The trouble is neither of us is a big fan of fish soup, and Simon doesn't like paella. I'll probably make a bit of soup, but it will use less than half the stock probably.

Tell Simon that I think he's a bit of a pussy. Salmon is my fave and when Sue and I get to Paris tomorrow, we will pick a day for Galleries LaFayette for their Salmon and a rose and then we will know we are back in Paris.
Thank you for your kind hospitality on our visit to the Loire.

Leon: It's my fave too :-) It was good to catch up with you both. We enjoyed your visit.

When salmon was on offer I would buy a whole one, poach the tail, cut steaks for the freezer and use a chunk to make gravlax.

Fly: I've done that once. You need a good supply of dill, which I don't have at the moment.