Flynn of the Outback 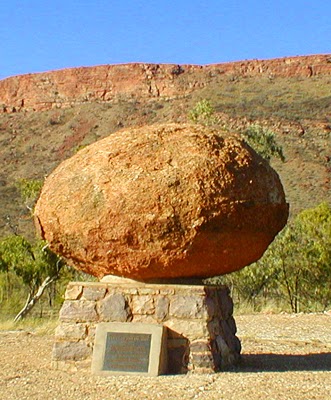 This unusual memorial on the side of the road just outside of Alice Springs is the grave of the Reverend John Flynn and his wife Jean. He lobbied tirelessly for those living in remote areas of Australia to receive the same 'mantle of safety' of services and communications that those on the coast had easy access to. As a result, the Flying Doctor Service was set up.

Choosing to transfer to a tiny and remote community in 1911 when he was in his early 30s, he initially set up several bush hospitals. But by 1917 he was thinking of the potential of radio and aircraft for an acute medical service, and the first flight of the newly formed service was achieved in 1928. It was the first air ambulance service in the world, and continues its vital work today.

From Boulevard Jean Jaurès, turn into rue de la Douzillère. The Maison pour Tous is at the foot of the water tower.
Posted by Susan at 09:00