The other day we were standing around in the garden of some friends and we noticed a pile of flint flakes. We didn't think they had just unearthed a hitherto unknown flint working site, although that is just what it looked like. I thought they must have accidently hit or dropped a flint nodule that was just lying around in the garden and it had shattered. 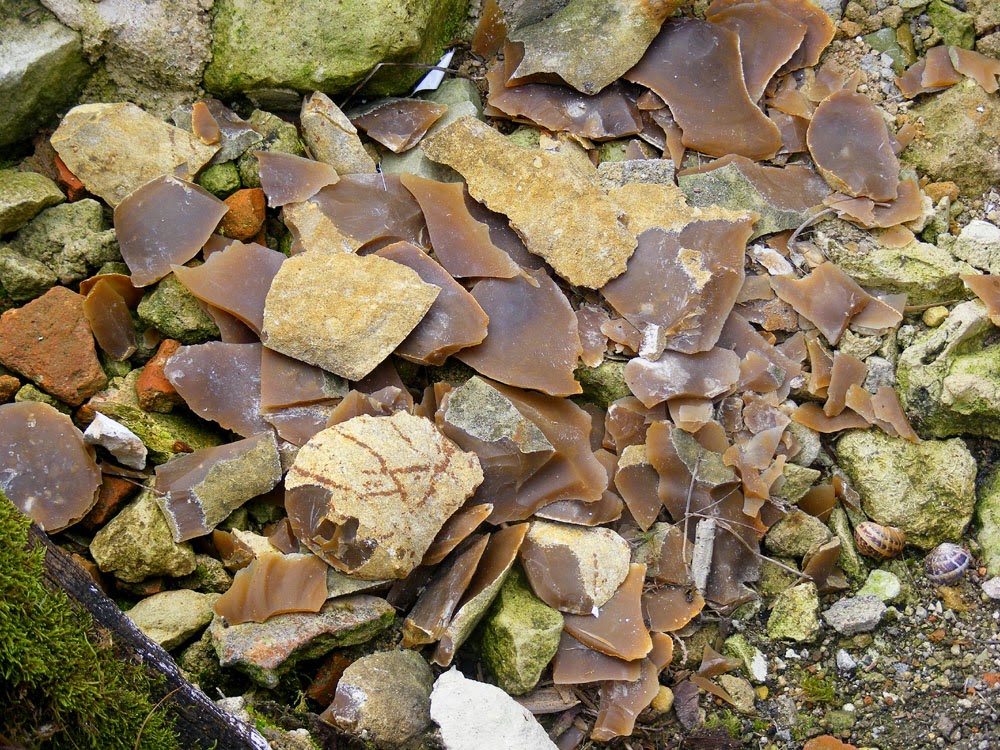 The real story was somewhat more interesting than just an accident though. They explained that last time local archaeologist and expert flint knapper Bertrand Walter had been giving a demonstration the heavens had opened and the demostration was hastily abandoned in a rush to get indoors. Our friends knew that Bertrand is very careful to clear away any trace of his demonstrations after they are concluded. So once the rain stopped they went in to the museum grounds and picked up all the pieces, removing them to their garden.

The reason Bertrand is so meticulous about clearing up is mainly because he is worried that unscrupulous people will pass the flint off as genuine prehistoric pieces, but also because flint shards are sharp and could injure someone.
Posted by Susan at 09:00

Bertrand really needn't worry...
those new flakes just don't have any patina...
nor have they been retouched...
nor do flakes [dèchettes] have any value.
Tools, however, do...
the ones to watch out for are the ones on brocante stalls where patina has been added in a polisher drum.
Those, however, have an all-over polish...
real tools don't...
the patina is only in the places that they have been held...
Neolithic man and his predecessors didn't wear work-gloves as such...
and most tools have a patina added by grit and clay powder on the hands...
so you get an uneven polish.

What I can't understand, is why he wasn't working over skins or cloth like our museum interpreter in GP does...
it makes removing dangerous flint scraps a doddle...
he empties the scraps into a trug to go through later and remove bits he can still work with...
and there are some good proto-arrowheads and microlith blades in that heap.
Some he would convert into blades that his wife could work with for her jewellery...
wonderful stuff...
made by 'original' methods with 'original' tools.

"Days on the Claise" has been included in our Sites To See #412. Be assured that we hope this helps to point many new visitors in your direction.

Tim: I doubt he's worried about people as informed as you.

Agreed...
I thought I'd write the screed so that people reading the post and comments will know what to look out for...
you gave me the perfect hook to hang it on as the post that I am working on for Touraine Flint has...
[A] to have illustrations...
[B] to get to see the light of day!!
Ta!!
Now, go and see the vast Crane extravaganza!