The face of Agnès Sorel has been reconstructed in digital 3D. The result is striking.

Is it the beautiful face that caused Charles VII to fall deeply in love and proclaim Agnès the first official royal mistress? It seems very likely. As a rare blue eyed blonde Agnès certainly stood out from the majority dark haired dark eyed crowd at court, but she wasn't just a pretty face. She was educated (speaking several languages for instance), charming and cultured. The king openly involved her in and consulted her on matters of state and it was this public role that gives her historical significance and resulted in her becoming a romantic legend in France (although almost unknown outside the country).


The copy of Jehan Fouquet's painting of the Madonna, for which Agnès is the model, that hangs in the Logis royal in Loches. 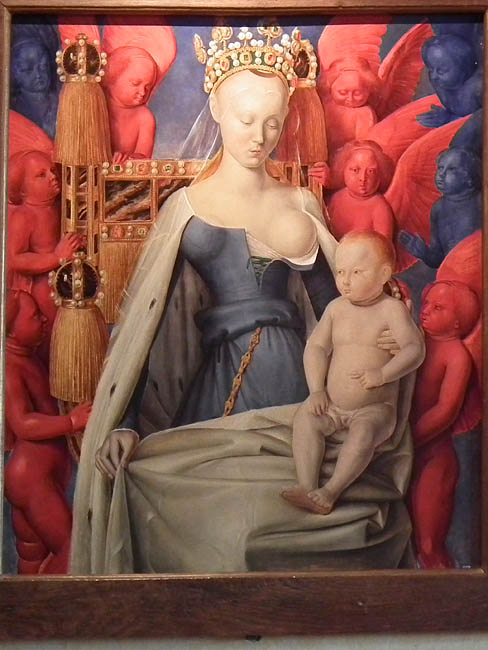 Philippe Froesch, from Visualforensic in Barcelona, has done many digital facial reconstructions, and the popular television programme Des Racines et des Ailes was the first to reveal the images. The Cité Royale de Loches website has an image of the new facial reconstruction of Agnès and a video of the section of the programme on Agnès embedded*. The programme is in French of course, and is about royal favourites.

The resulting reconstruction is impressive. With up to date digital imaging software it is now possible to show very fine detail of the skin texture, hair, eyes. Agnès's face had already been reconstructed in 2005, after her tomb was opened as part of reinstating it in the church of Saint Ours, but in digital terms, the technology used then is ancient. It meant that a scan of her skull already existed though, and the current reconstruction used it as a starting point. Her skull, which is housed in a terracotta urn inside the tomb is very well preserved and that combined with the new technology has allowed a very realistic and detailed reconstruction. The colour of her hair for example was based on the remains of her eyebrows still attached to the skull as well as on contemporary descriptions of her. Dr Philippe Charlier, who examined her remains as part of the 2004 exhumation and confirmed that she had consumed an extremely high dose of mercury prior to her death (about 10 ml) was also involved with this reconstruction. Whether the mercury was a mistake in the dose or a deliberate poisoning is something Dr Charlier refuses to be drawn on. (My money's on deliberate poisoning, at the orders of the future Louis XI.) He did note however that she had malaria, but that it was not the cause of death.


The marble effigy of Agnès on her tomb in Saint Ours church, Loches.
(taken by Simon who is tall and clever and can manage such things) 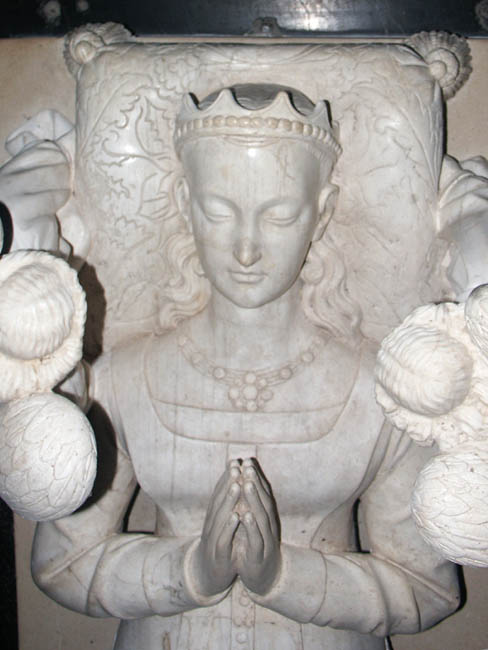 This new reconstruction shows a distinct resemblance to the woman in the painting by Jehan Fouquet. The painting is of the Virgin and Child, commissioned by Etienne Chevalier after Agnès's death, but it has always been accepted that Agnès was the model. Jehan would have seen Agnès often in life and probably had many sketches of her. You can see the same large eyes, small mouth and high forehead in the painting and the reconstruction. Fouquet's painting also shows us the full breasts of a nursing mother and a slender fine boned figure. Sadly, whilst the technology allows us to reconstruct Agnès's head in full detail, it is unlikely we will ever see a full body reconstruction according to Philippe Charlier, even if we had the rest of her skeleton.

Nowadays the only extant contemporary three dimensional representation of Agnès is the effigy on the tomb. This too matches the skull almost perfectly, probably because the sculptor would have based the work on a death mask. The modern reconstructor worked in a remarkably similar way. The image is 'sculpted' by hand, the software does not do it for you automatically. Surprisingly, the digital reconstructor relies more on contemporary painted images than on contemporary sculptures for certain information about an historical character's appearance. The reason is that all artists vary in skill, but lack of skill and errors in proportion are more exaggerated in a three dimensional work than in a two dimensional work.

*If you watch the video to the end you will see our friend Tony Williams talking about the Brenne. He's an LPO warden on a nature reserve there.

Snap.. A la cuisine hier... We had the same but not crumbed! Interestingly Lambs liver is a fraction of the price in the UK and for the first time we brought some back with us.

Colin & Elizabeth: I think the price difference is because offal is valued here, but very few people eat it in the UK.

Can you get lamb kidneys? I like those. In the U.S. I would order them at the supermarket for pickup 2 days later. One day the butcher handed over the goods and said "There's going to be one happy cat at your house this evening!" Little did he realize...

Ken: I rarely see lamb kidneys, but when I do I usually buy them. Usually it's pork kidneys that are easy to get here.